Thanks to her big brother, and the generosity of her community and friends, one Fountain City, Wisconsin teen recently got to experience the joys of prom -- even though she was unable to attend her own. 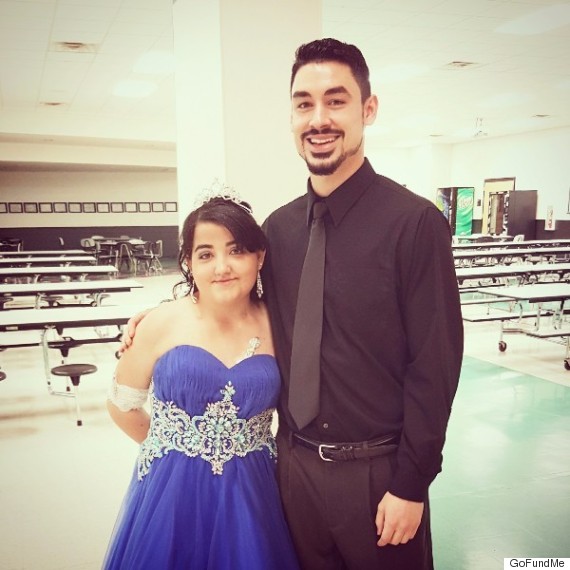 On April 25, 18-year-old Olivia Pelley was all dressed and ready for her junior prom. Her hair was coiffed, her gown was on, and the evening stretched before her, full of promise. Olivia had already been unanimously voted prom queen by her classmates, and the teen was excited to be attending the dance with her first date ever.

But as Olivia took photographs with her friends before the big event, she started to feel unwell.

In the end, however, Olivia had to seek medical attention and was rushed to the hospital in her prom outfit. It was a tremendous disappointment for the teen.

Seven years ago, Olivia reportedly had a kidney transplant from her dad. But this year, complications from the transplant have forced Olivia to go in and out of the hospital. According to the GoFundMe campaign set up by her family, doctors say the teen will need a new kidney “very soon.”

Given the challenges that Olivia has faced, her 22-year-old brother, Michael Pelley, said he was determined to give his sister something to smile about. He knew how important the prom was to his sibling, so he decided to plan a special one just for her.

"I was determined to make it happen. I couldn't let one of the greatest moments in my sister's life turn into the most tragic," Michael told ABC News.

So he started planning the special event. He reached out to Olivia’s school, as well as local businesses and community members, for help.

According to Winona Daily News, the response was overwhelming. A few local companies agreed to sponsor the event, and parents and students donated funds. Olivia’s school also agreed to allow the “second prom” take place in the gymnasium.

“It just goes to show the close-knit bond small-town communities have, and I was really touched by the amount of people that reached out to me,” Michael told the Daily News. “Everyone I told the story to felt compelled to do something.”

On May 17, Olivia’s prom took place. ABC News reports that at least 70 people attended the dance, including the teen’s family, friends and schoolmates. There was also a special coronation ceremony in which she was named prom queen.

“I love my brother for doing this, it really means a lot,” Olivia told the Daily News of the event. “I’ll remember this forever.”

Girl who missed prom due to kidney complications gets second one thanks to her brother: http://t.co/ymqs6kAoXp pic.twitter.com/SJF7FG0aYK

To learn more about Olivia, or to find out how you can help, visit her family's GoFundMe page here.

You Always Have An Ally
GoodNCrazy/Flickr
Whether you're commiserating about your parents or in an argument with another family member, you can always count on your sibling to have your back.
They Make You More Successful
Renate Flynn/Flickr
Researchers at the University of Essex believe an older sibling's success might actually spill over on to their younger siblings, so stop arguing over who's more successful and just be glad you're both doing so well.
Double The Wardrobe
Matt Stefanidis/500px
If you're lucky enough to have a sibling who is the same size as you, you'll reap the benefits of a shared wardrobe. And if you aren't the same size, at least you can still 'borrow' their accessories.
They Make Family Dinners Less Awkward
basykes/Flickr
Even if you are close with your cousins, catching up with your extended family can be intimidating — but having a sibling or two by your side is sure to make things much easier.
It Makes Gift Giving A Lot Cheaper
TracyElaine/Flickr
Buying gifts can get expensive, but if you have a big family you can always go in on gifts together. Twenty dollars won't go far for one, but times that by three, and you can get Mom or Dad something special with $60.
They Make Great Travel Companions
Thomas Hawk/Flickr
Travelling with your siblings can be a nightmare when you're kids, but once you're older, booking a getaway with your big brother or sister is great. Common interests make sightseeing a cinch and let's face it — better budgets don't hurt either. But the best part? Unlike travelling with friends or a significant other, if you get into a fight, you know it won't ruin your trip because you're bound to make up and forget about it in a few minutes anyway.
You Always Have A Second Home
Distance be damned, if your sibling just happens to live far away, you always know you have a place to stay.
They Pave The Way
Zero Creatives
If you're lucky enough to have an older sibling who was actually cool in high school, it'll make going into grade 9 a lot easier — as long as you don't like being called mini-John or mini-Jane!
Oh, And Their Notes Are Your Notes
jez`/Flickr
As long as the curriculum stays the same, your older sibling's notes are golden!
They Always Get Your Offbeat Sense Of Humour
sean dreilinger/Flickr
No one will appreciate your twisted jokes quite like your brother or sister, who think they are hilarious.
You Could Borrow Their ID
slagheap/Flickr
Having an older sibling that looks like you is a blessing when you have a birthday late in the year and all your friends are going dancing at a local club. Yeah ... dancing.
You Always Had A Playmate Growing Up
Shuji Kobayashi
Playing against the computer isn't fun, but beating your brother in Mario Kart sure is.
They Teach You Patience
David Stephensen/Flickr
Sharing your toys and having to wait your turn when you're little might seem like the end of the world, but when you're older you'll be grateful you learned how to play nice at an early age.
They're There For You In Times Of Need
Emily Barney/Flickr
From lost jobs to bad break ups, if you need a hug or a shoulder to cry on, your sibling will be there in seconds.
They're Your Guinea Pigs
Getty Images/Flickr Open
If you ever want to ask Mom or Dad for something but aren't sure how they'd react, just send your sibling to do it for you. (Note: Same rules apply for other life lessons.)
You Can Blame Them For Pretty Much Everything
Sahana david photography/500px
In case you were wondering, the other word for sibling is scapegoat.
They Make Great Business Partners
ohhrax/Flickr
Your sibling probably looks at money and success the same way you do, so working with them might be a good idea. They don't call it a family business for nothing!
They Take The Pressure Off
LollyKnit/Flickr
If your parents are wondering why you're 30 and still single, you could remind them that your old sibling was 35 when they tied the knot. Better yet, your big brother or sister might even say it themselves!
They Are Built-in Babysitters
Getty Images/Flickr RF
Growing up, you took care of your younger siblings. Now that you're older, they'll help you take care of your kids.
They'll Be Your Alibi
Tobyotter/Flickr
When your parents ask where you went, your sibling automatically has your back and vice versa. Yep, that goes for skipping family dinners as a grownup too.
You Share Responsibilites
s i l v i u/Flickr
Growing up, if you forgot to take out the trash, you could count on your sibling to take care of it. As you grow older, you now take turns checking in on your parents and the family house.
They Will Be Your Oldest Friends
adwriter/Flickr
They're your lifelong best friend. As you grow old you'll grow closer, and you'll all be happier for it.