California Gov. Jerry Brown (D) on Wednesday signed a bill approving a $2 minimum wage increase to be rolled out over the next three years. Unless another state passes a larger increase, the bump will make California's minimum wage the highest in the country.

The governor joined legislators, business owners and workers at a signing ceremony in Los Angeles on Wednesday morning, with plans to fly to another ceremony in Oakland that afternoon. 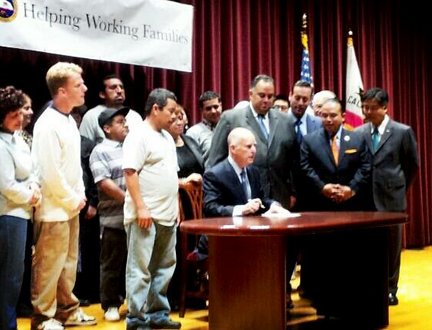 “For millions of California’s hardworking minimum wage employees, a few extra dollars a week can make a huge difference to help them provide for their families,” said state Senate President pro tem Darrell Steinberg in a release. "They deserve a modest boost and after six years, an increase in California’s minimum wage is the right thing to do.”

The minimum wage will go up in two separate $1 increments. The first will bump the rate from $8 to $9 in July 2014, and the second increase, to $10, will come in January 2016. According to the Economic Policy Institute, about 3 million Californians are currently working for minimum wage.

Many low-wage workers across the state hailed the news.

Anthony Goytia, who works the overnight shift at a Walmart store in Duarte, currently lives in a garage with his wife and two children, while a third is on the way.

“If I had a higher wage, we would be able to rent an apartment,” he told The Huffington Post. “[Right now] we’re living in poverty. I have to live check to check.”

He detailed the struggles of living off a low wage, especially with a family. “I want to be able to buy my kids shoes if they need them and not wait for our income tax [return] to do it,” he said. “I want to give my wife money for maternity pants and underwear. She needs bras. It’s just ridiculous.”

Goytia said his family cannot afford Walmart’s health insurance plan and must depend on Medi-Cal, the state's Medicare program, instead. They also frequently receive food stamps.

“I really don’t want to depend on food stamps,” he told HuffPost. “I’m a hardworking person; I want to be a proud, working American that’s not on public assistance."

Maria Cristobal works seasonally in a packinghouse or in the lettuce and chile fields near where she lives with her two children in Fresno.

“Two more dollars would impact me a lot,” she told HuffPost. “I would definitely like to have more money for the house, for food, for rent, utilities.”

But she worries that a minimum wage hike might equal a price hike as well.

“When they raise wages, they raise prices of things," she said. "I think companies will cut back on hiring people, and it’s hard to find work sometimes.”

Brown, however, argued the reverse, saying wages in California have stagnated while consumer prices have continued to rise.

“The minimum wage has not kept pace with rising costs,” the governor said in a release. “This legislation is overdue and will help families that are struggling in this harsh economy.”

But by the time the $10 minimum takes effect, it will probably still be outpaced by inflation. According to the Bureau of Labor Statistics, $10 per hour in 2016 is equivalent to roughly $9.36 in today's dollars.

Assembly Speaker John A. Pérez (D-Los Angeles) also disputed the idea that the minimum wage increase would put a drag on the economy.

“A $10 hour minimum wage boosts earnings by $4,000 a year and will put $2.6 billion dollars back into the hands of workers,” he said. “This is money that will be spent at grocery stores, on school supplies and invested in education, and that ultimately strengthens the recovery and ensures California’s job market continues growing faster than the rest of the nation.”