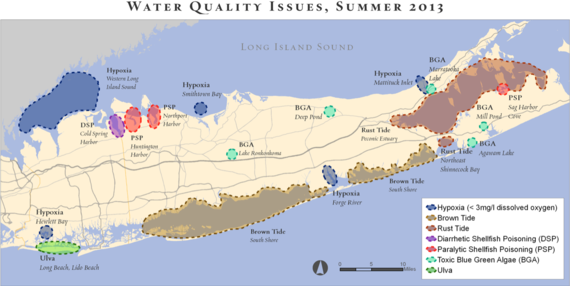 The numbers are staggering -- 500,000 septic tanks on Long Island. An estimated 2000 outfall pipes pouring runoff into our lakes, streams and bays with each rain. 100+ small dams and spillways blocking the way for ocean fish that would otherwise spawn. Clam harvests in the Great South Bay down well over 90 percent. Scallops in Peconic Bay all but wiped out by rust tide. Fish populations a small fraction of what they were not too long ago.

The groundwater, polluted with nitrogen from the septic tanks and from lawn and farm fertilizers, has over the past 30 years triggered ever larger and more devastating algal blooms -- brown tides, red tide, rust tide -- in all our major bays, destroying marine habitats everywhere. Marshes vanishing, fish disappearing as the water becomes ever more acidic and oxygen deprived. Finally, there's Long Island's drinking water, which rests in aquifers left there 10,000 years ago by glaciers, increasingly polluted by seepage from above.

2.8 million Long Islanders live in Nassau and Suffolk now, a quadrupling of population since World War II. If it were its own country, it would be the fourth most densely populated one in the world.

Can Long Island be saved? If the day comes soon when our rivers, ponds and bays are rendered lifeless, why would people want to live here at all? If its natural beauty is gone, if the groundwater is rendered a witches brew of household chemicals, pesticides and pharmaceuticals, what then?

Fortunately, Long Islanders are awakening to this crisis. Governor Cuomo has announced a series of public meetings to address the issue, three of them this month. Senators Schumer and Gillibrand are now fully aware of what is at stake. Senator Gillibrand helped support Suffolk County's successful bid for $500K in consulting from IBM's Smarter Cities Program, where a plan is to be developed to replace the worst 100,000 septic tanks with modern sewering and advanced ecofriendly toilets such as what Caltech has developed as winner of The Gates Foundation Reinventing The Toilet Challenge. Senator Schumer is planning to come to Long Island this summer to speak on the issue of sustainability. Over a 100 organizations have joined The Long Island Clean Water Partnership. Politicians and policy makers are embracing science to both diagnose the problems LI faces and to develop the solutions. Both Ed Mangano (Nassau) and Steve Bellone (Suffolk) are facing the issue of Long Island's water quality and its future head on. The press, particularly Newsday, has stepped up its reporting, and helped Long Islanders to understand what is happening, and why and what needs to be done. Beyond that, people of every political persuasion are uniting behind the vision of a sustainable Long Island, a place where our children and grandchildren will be able to fish, clam, sail, swim and enjoy Long Island's natural beauty as we once had.

Sandy of course helped to bring Long Islanders together around its environmental issues. It severely damaged the Bay Park sewage treatment plant, flooded out low lying areas laden with septic tanks, decimated marshes and shoreline habitats, and signaled to all of us in no uncertain terms that we needed a plan to rebuild Long Island and soon. A year later, everyone is on the same page, and there's the popular and the political will to make the investments necessary to create a sustainable Long Island. To those who've been involved in the fight, this turnabout is nothing short of miraculous.

Over the next months, I will be chronicling Long Island's efforts to rebuild its marine and fresh water habitats, its shores and the communities that dot them. Long Island has the chance to make history. But then it has to. A barren, toxic Long Island is not a place people would want to live in, vacation at, or work on. This problem of polluted groundwater will cost billions to fix certainly, but will prevent the loss of many many billions more.