Article and Photos by David Jensen, Beer Expert for the Menuism.com Beer Blog 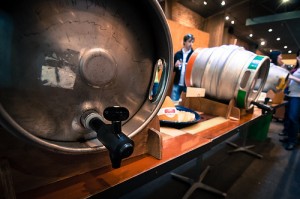 Have you ever walked into a beer bar or pub and noticed some of the taps both looked and dispensed beer differently? Or have you ever been to a beer festival, or beer event, where beer was served directly from a spigot in the side of a metal container propped up on a table? If so, then you may have already encountered cask conditioned beer. If not, then after you read this article, I hope you seek some out.

What is Cask Conditioned Beer?

Cask conditioned beer, or cask ale, is beer that is both conditioned in and served from a cask. Up until the beer is placed in the cask, the brewing process is exactly the same: mash, boil, ferment. After the beer finishes primary fermentation, it is placed in a cask with finings (a substance that causes particles suspended in fluid to drop out of suspension) to help clarify the beer. Often sugar will also be added to the cask to aid with the secondary fermentation, and sometimes even extra hops. The beer is then conditioned in the cask. Conditioning is the penultimate stage in the brewing process when the beer matures, clarifies and carbonates. In the case of cask conditioned beer, there is a small amount of yeast remaining in the beer that causes secondary fermentation, which carbonates the beer. The conditioning time depends on the beer style and can last between 24 hours and 16 days. Traditionally, the casks are conditioned at the pub by the publican, but can also be conditioned at the brewery and shipped out when ready. When the cask beer is ready, the yeast and other sediment settles to the bottom, the beer is carbonated and served directly from the cask. Cask ale is always unfiltered, unpasteurized and always best fresh.

Some of the most common styles of beer found in a cask are English-styles: bitter, mild, brown, pale, ESB and so on. However, I have seen other styles, such as American IPA on cask like Ballast Point Sculpin IPA, and I've also tried Rogue Chocolate stout on cask.

But what's the difference? Since cask conditioned ales are not filtered and not pasteurized, they contain live yeast that continues to add complexity, new flavors and new aromas to a beer. The exact differences vary from beer to beer. The texture of a cask conditioned beer on your palette is often more creamy and smooth than its non-cask counterpart. Furthermore, there are a few beers that are only available on cask.

The cask is a barrel-shaped container that, in general, is longer than wide and has a bulge in the middle. Unlike a keg, a cask does not contain any valves or internal tubes; instead, it has two holes, one hole on the bulge on the side of the cask and another hole, called the
bunghole
, on the circle face of the cask. The hole on the side of the cask has a plastic or wooden fitting called a
shive
to regulate the flow of air into and CO2 out of the cask. The bunghole is the opening from which the beer is dispensed. This hole is sealed with a fitting, called a
keytone
, which is first thoroughly cleaned and then hammered out with a mallet to attach the tap.

Up until the mid-20th century, most casks were made of wood, but now most are made from stainless steel, and a few are plastic. The most commonly sized cask is called the firkin, which holds 9 Imperial gallons, or 10.8 US gallons. Most other sizes are rarely ever seen. If you see your local brewpub or beer bar advertising "Firkin Tuesday" or "Firkin Friday," the chances are they will have cask beer available. 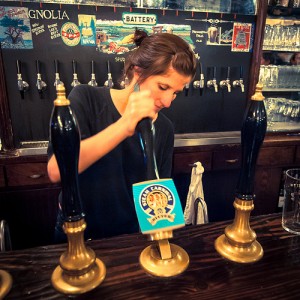 Cask conditioned beer is dispensed directly from the cask in one of two ways. First is simply by means of gravity, or gravity dispense. The cask is laid on its side and a spigot is attached through one of the openings. If you attend a festival or special event of cask conditioned beer, this is likely what you will see.

The second method for dispensing cask beer is likely what you will see at a pub that regularly serves cask ale: a beer engine, also known as a hand pump. The beer engine allows the cask to be in a remote location, preferably under the bar in the cellar (or some other temperature-controlled area). The beer engine is a pump, usually manually operated, that siphons beer into an airtight piston chamber. Pulling down on the pump raises the piston, drawing beer along with it, up through the spout into your glass. The spout is often a swan-neck spout and sometimes fitted with a "sparkler" to aerate the beer and create a more foamy head. Since beer sits in the piston between servings, good pubs will discard the first pull of the day.

Cask Ale Should Not Be Warm and Flat

Most of the time we drink our beer too cold. The first reason is practical: the colder the beer, the easier to dispense on draft without a glass full of foam. Another reason can be to cover up any off-putting flavors. Ice-cold beer is harder to smell and to taste but as it warms up, a beer can reveal a beautiful bouquet of malt and hops, or it can reek like the floor of a dank pub.

If your first cask conditioned beer is not handled properly, you probably won't have a good experience. It should be fresh, cool (not warm, not cold), carbonated, not flat, and with a head textured more like soap bubbles than foam.

A great way to try many cask conditioned beers at the same time is to attend a festival like Casks and Quesos or Festival of Firkins, which take place during San Francisco Beer Week each year.

If you seek out cask ale at your local beer bar or pub, be sure to find a place that both has high turnover on their cask conditioned beer and stores and handles it properly. In San Francisco, try Magnolia Pub and Brewery, Toronado, or Public House. In Denver, try Falling Rock Taphouse. In New York City, try The Ginger Man or The Blind Tiger. In Toronto, try barVolo, who is also encouraging other Toronto bars to serve and properly handle cask ale. If you're having trouble finding a spot with cask ale, just send me a message on Twitter and I'll try to find somebody to help you out.

Related Links from the Menuism.com Beer Blog:
• All About Belgians: A Guide to Belgian Beer Styles
• 15 Craft Beers to Try Before You Die
• Craft Beer Festivals: A Survival Guide

All About Cask Conditioned Beer originally published on the Menuism.com Beer Blog.

David Jensen is based out of San Francisco and is the primary writer and photographer for Beer 47, a blog focused on craft beer, beer events, cooking with beer and homebrewing. In addition to the blog, you can frequently find David on Twitter as @beer47, tweeting interesting news and sparking up conversations about craft beer while sipping his favorite Double IPA. By day David is a software engineer for a small Internet company.