The 67th Emmy Awards will come and go, and the winners will, no doubt, celebrate. It just reminds us every year that the shows we watch on a regular basis (or not), will get the recognition they deserve -- and the actors/actresses/directors/producers/writers that work so hard to put their shows on the air, will take their bows. (And we get to hear their acceptance speeches. Yea!)

Let's take a moment to shout out to an unrecognized category: "Best Catchphrases" in a TV Series and/or Game Show. We'll pick some of the classic television shows because, why not? For future reference Academy of Television Arts & Sciences, take a look at these picks and think about adding this "Best Catchphrases" category. Here are our 21 picks from the Classics. (Last year we did "The 15 Most Memorable Lines In TV History." There are some crossovers here because... there just are. This year we added some video clips that you'll want to watch only if you want to go down memory lane -- and you like to laugh out loud.)

"Ladies and gentlemen: the story you are about to hear is true. Only the names have been changed to protect the innocent." Such a cool opening for one of the most memorable "cop" TV shows of all time. Sgt. Joe -- My name's Friday. I'm a cop -- Friday (Jack Web) and his detective sidekicks (played by Ben Alexander and Harry Morgan) managed to keep us glued to the television with their subtle tactics in apprehending criminals because all they really needed in their quest was... just the facts. So cool. Dum, de, dum, dum! Check out this very cool short video. 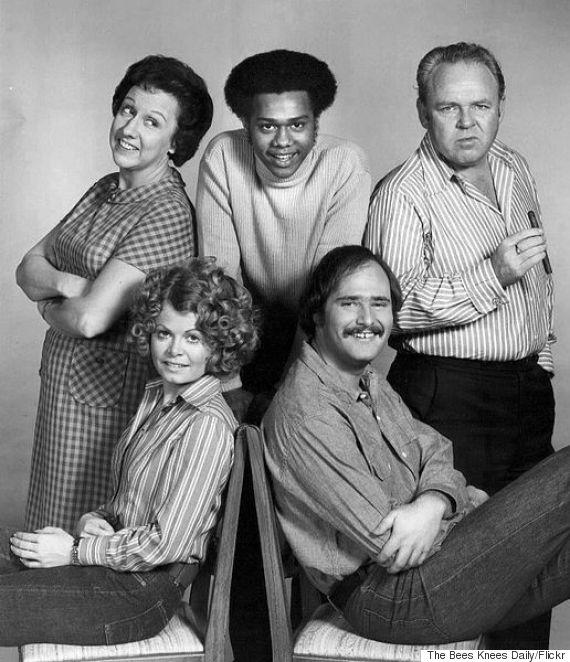 Archie Bunker (Carroll O'Connor) had a way with words. He called his liberal son-in-law, "Meathead"and his faithful wife, "Dingbat " (and he insulted about every stereotype you can name) without getting his hand slapped from the politically correct community. He was so lovable, though, right? Whenever his wife Edith (Jean Stapleton) had an opinion, he managed to stifle her -- most of the time. Check out the time she stifled him here.

Kojak (Telly Savalas) was probably the only New York City detective on TV who made the Tootsie Roll Pop sexy. And, didn't he start the bald head craze? (OK, Yul Brenner in the "King And I" helped get this trend started). Who loves Ya, Baby? We do, we do! (Look here for clip.)

Maybe you had to be there, but no one could grab an audience with an introduction quite like Alfred Hitchcock. His "series of unrelated short stories covering elements of crime, horror, drama and comedy about people of different species committing murders, suicides, thefts and other sorts of crime caused by certain motivations" kept us coming back for more each week. It seems like seven years just wasn't enough for this film director and his spell-bounding stories. Take a look at his one-of-a-kind introductions here.

"Get Smart" (battling the forces of KAOS) had an embarrassment of riches in the catchphrase department. Maxwell Smart, Agent 86 (Don Adams) kept his co-hort, Agent 99 (Barbara Feldon) and the Chief (Edward Platt) on the tips of their toes every time he opened his mouth. "Would you believe" these words of wisdom: "Missed it by that much!," "Sorry about that, Chief," and "I asked you not to tell me that." Yes, we would believe anything you say, Agent 86. Take a peek at these "Get Smart" funniest moments here. 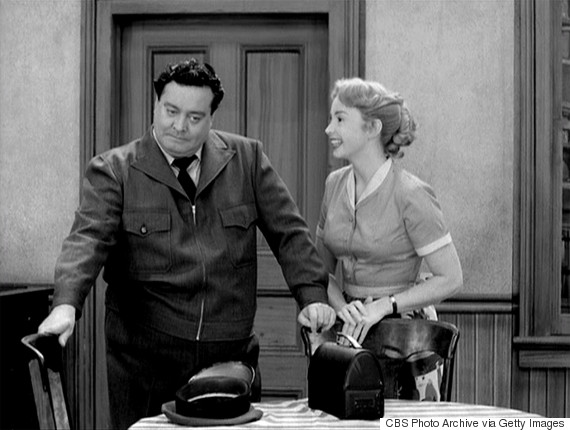 Who could forget the wild and crazy antics of New York City bus driver Ralph Kramden (Jackie Gleason), sarcastic wife Alice Kramden (Audrey Meadows), NYC sewer worker, Ed Norton (Art Carney) and his wife Trixie (Joyce Randolph)? These four feisty Brooklyn residents tested each others patience on a daily basis which was the reason millions of viewers tuned in once a week. Needless to say, Alice Kramden knew how to draw blood which is why Ralph gave her the what for... "One of these days, Alice, you're going to the moon!"

Peter Falk made "Colombo" a household name with his unique way of solving the "whodunit" mystery in this clever television detective show. The Fashion Police would have a field day with this disheveled, cigar-smoking detective. (Oh, that rumpled, beige raincoat... how we loved it.) The criminal always thinks he/she has the upper hand in the investigation only to be caught up in the web of Colombo's increasingly intrusive presence. Just when the suspect thinks all is well, the polite detective (who always gets his man/woman), has "just one more thing" to ask.

This Great Depression Virginia mountain family sure knew how to grab our hearts. Each episode focuses on the "family of John Walton Jr. (known as John-Boy), his parents, John and Olivia Walton, their seven children, and John's parents Zebulon "Zeb" and Esther Walton. John-Boy (Richard Thomas) is the eldest of the children (17 years old in the beginning), who becomes a journalist and novelist. In the signature scene that closes almost every episode, the family house is enveloped in darkness, save for one, two or three lights in the upstairs bedroom windows. Through voice-overs, two or more characters make some brief comments related to that episode's events, and then bid each other goodnight, after which the lights go out."

"Hill Street Blues"is an American serial police drama that chronicled the lives of the staff of a single police station located on the fictional Hill Street, in an unnamed large city, with 'blues' being a slang term for police officers for their blue uniforms." In the opening, Sgt. Phil Esterhaus (Michael Conrad) does the police roll call, concluding with his signature line: "Let's be careful out there."

"The Red Skelton Show" was mainly known for the comedy sketches performed by Red himself which included an array of comedic characters (Clem Kadiddlehopper, San Fernando Red, George Appleby and Freddie the Freeloader). He also had guest star performers including John Wayne, Phyllis Diller, Jack Benny... the list goes on forever. His opening monologue often included his two favorite seagulls, Gertrude and Heathcliff. At the end of each show, he ended it with thoughts that went something like this.

That crazy redhead we affectionately know as Lucy Ricardo (Lucille Ball) was never at a loss for words... or hair brained, good-natured mischief. Her cohort, Ethel Mertz (Vivian Vance) was somewhat skeptical at times to play along, but the two BFFs made life interesting for their respective spouses, Ricky (Desi Arnaz) and Fred (William Frawley) to say the least. When Lucy tested Ricky's patience one too many times, he screamed the only phrase that came to mind (each time): "Lucy, You got some 'splainin' to do!" Don't we all use that phrase ocassionally when we get pissed at our significant others (no matter what gender they are)?

Let's give a big round of applause to Jerry (Jerry Seinfeld), Elaine Benes (Julia Louis-Dreyfus), George Costanza (Jason Alexander) and Cosmo Kramer (Michael Richards) for giving us the best nine sitcom seasons of our lives. Did you know it was actually George's new girlfriend, Marcy, who came up with the "yada, yada, yada" expression? If you don't do anything else today, watch this Seinfeld montage.

I don't care how old you are, you have heard -- at one time in your life -- a game show announcer say, "Come on down!" You know the game show: "The Price Is Right." And you know the master of all game shows: Bob Barker. The point is, no matter what year you were born, somewhere, on some network, "The Price Is Right" has been on your radar. Unless you live in a third world country. Check out this "Come on down!" video with Bob Barker. 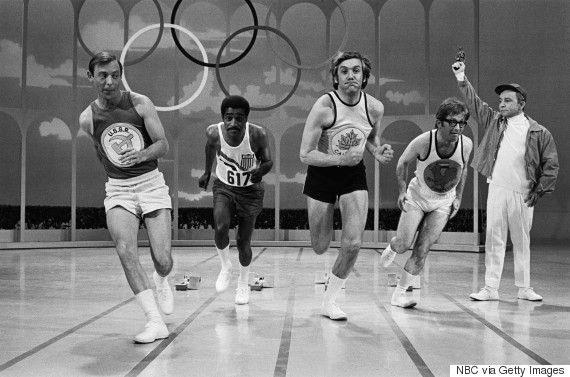 The comedy team of Dan Rowan and Dick Martin hosted this psychedelic, fast-moving comedy series that featured series regulars Lily Tomlin, Ruth Buzzi, Judy Carne, Goldie Hawn, Arte Johnson, Jo Ann Worley, Gary Owens, Alan Sues and Henry Gibson. Judy Carne became the butt of the joke when she said, "Sock it to me." They doused her with water or gently assaulted her with rubber objects. Be careful what you say out there.

"Good Times" lets us in on the lives of Florida (Esther Rolle) and James Evans (John Amos) and their three children, J.J. (Jimmie Walker), Thelma (Bern Nadette Stanis) and Michael (Ralph Carter). "Episodes of Good Times deal with the characters' attempts to survive in a high rise project building in Chicago, despite their poverty" ... and hilarity ensues. Fess up, you know you said the word "Dy-n-Mite!" every time something good happened in your life back in the day, thanks to the adorable J.J. (Although nobody says it better!)

Who remembers that "Maude" was a spin-off from "All In The Family?" Yes, Maude (Bea Arthur) was Edith's cousin -- who somehow got the spunk gene in the family. And who remembers that Maude was a "liberal, independent woman living in Tuckahoe, NY with her fourth husband, Walter (Bill Macy)?" And if you didn't know all that... (say it).

Picture it: a remote tropical island resort where all your dreams come true. Well, not exactly. There were glitches in those wishes. Mr. Roarke (Ricardo Montalban ), assisted by his adorable miniature side-kick Tattoo (Hervé Villechaize) had the best of intentions of making his guests live out their fantasies, but what kind of show would that be if everything were perfect? You could count on one thing. The beginning of each episode, a plane arrived with their (we're presuming rich) guests. Tattoo always alerted Mr. Roarke, by pointing up to the sky, announcing: "De Plane, de plane!" Welcome to Fantasy Island.

"Different Strokes" starred Gary Coleman and Todd Bridges (Arnold and Willis Jackson), Conrad Bain (Phillip Drummond) and Dana Plato (Kimberly Drummond) who were perhaps one of the first racially mixed families on television. Arnold didn't hold back when Willis came up with some bizarre and/or surprise monologue that got his goat. "What u talkin' 'bout, Willis?" Too cute!

This may be my all-time favorite detective show based in Hawaii (sorry "Magnum P.I."). And it may well just be because of one of my all-time favorite detective catchphrases: "Book 'em Danno." Detective Steve McGarrett (Jack Lord) worked so well with Danny Williams (James MacArthur) in each episode to put the bad guys in hand cuffs. (And who didn't love that theme song!? Check it out here and turn the volume up and enjoy!)

Groucho Marx was probably the first choice to host this quiz show that featured a show chocked full of competitive questions -- and some hilarious conversation. As it turns out, the comedian was the perfect host. As in all quiz shows, there is money to be won. But, with the right "word," a contestant could win an extra hundred big ones. All they had to do was say the secret word. Easy Not so fast. How many words are in the English language? But we loved to hear Groucho announce: "Say the secret word and win a hundred dollars." Sometimes they did. And that was seriously exciting.