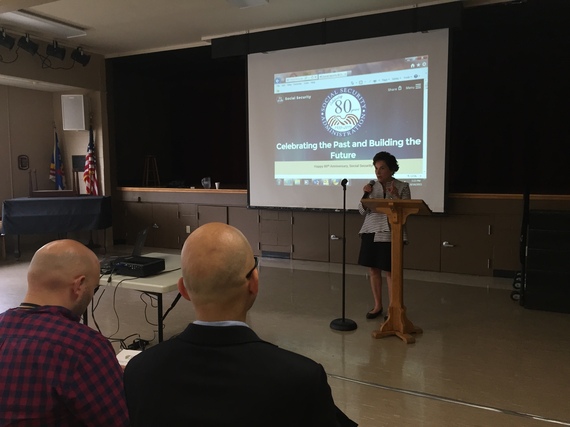 Social security has been a national treasure for 80 years, bringing financial stability, independence and dignity to millions of Americans. We certainly have a lot to celebrate today because Social Security has an outstanding record of achievement.

With one monthly contribution, working men and women purchase retirement, disability and life insurance for themselves and their families.

Social Security is there for us. It has never missed a payment -- every benefit check has been deposited in full and on time.

Since 1989, it has spent less than 1% of expenditures for administrative costs -- last year, it was seven-tenths of a percent. That is because of the structure of Social Security -- no means-testing, no assets tests - if you've contributed, you're in. It's also because of the commitment and skill of those who work for Social Security -- in their field offices and at headquarters. Its earned benefits keep 22 million Americans out of poverty -- including 1.2 million children and 11.6 million older women. In Illinois, nearly 800,000 people would fall below the poverty line without their earned benefits. More than 9 million veterans rely on Social Security, 11 million disabled workers and their families, and 8.5 million children. In 1 out of every 4 households, someone receives Social Security today.

Those are numbers -- and they are impressive. But we all know that there are people behind those numbers. And I am most grateful to Social Security for bringing financial security and peace of mind to my own family, my friends and neighbors, and my constituents.

People like Larry, a Navy veteran, who relies on his Social Security Disability Insurance as his sole source of income. He called my office last month to say how important Social Security is to him, especially since he doesn't have a family to help support him.

Like Carolynn who wrote to remind me that, "Social Security is the largest and many times the only source of income for many older Americans." She said that she and many of her fellow seniors live near or below the poverty line and rely on their benefits.

I could go on and I know that many Illinoisans and people across the country have their own stories on the importance of Social Security. Every person I hear from asks me not just to protect their benefits but to keep Social Security strong for their children and their grandchildren and future generations.

When President Franklin D. Roosevelt signed Social Security into law 80 years ago today, he said, "We have tried to frame a law which will give some measures of protection to the average citizen and to his family against the loss of a job and against poverty-ridden old age."

Social Security has certainly done that - and that's why we are celebrating today. But President Roosevelt also said that day that the law he signed "represents a cornerstone in a structure which is being built but is by no means complete."

I believe we have a responsibility not just to protect Social Security's structure - but to build on it. That is why I introduced H. Res. 363 calling on Congress to support policies to protect and expand benefits while ensuring that Social Security has the resources to pay benefits for many, many years.

I am the co-chair of the House Democratic Caucus Seniors Task Force, a member of Congress, and a grandmother who wants to make sure Social Security is there for many years to come. I'm so happy to celebrate Social Security's first 80 years and will keep working with my colleagues and advocates across the country to protect and improve Social Security for future generations. 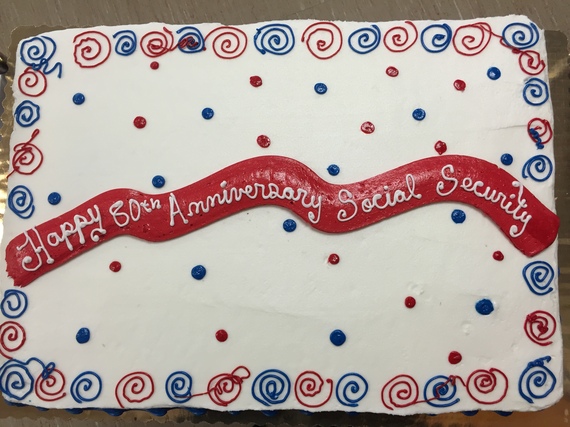