Washington intern Chandra Levy disappeared in May 2001, launching an investigation that gripped the nation -- especially when Chandra's father alleged that she had been having an affair with then-congressman Gary Condit of California. (The congressman was never named an official suspect in Chandra's case.) Chandra's fate remained a mystery until May 2002, when her body was found in Washington's Rock Creek Park. But was she murdered -- and if so, who had killed her?

In May 2009, an illegal immigrant from El Salvador, Ingmar Guandique, was charged with Chandra's murder and later sentenced to 60 years in prison. In this clip from a new "Oprah: Where Are They Now?", Chandra's parents, Sue and Bob Levy, confess their true feelings about Ingmar's conviction. Sue recalls her experience in the courtroom during his sentencing. "I pointed my finger and asked him if he killed my daughter -- and I asked him to look at me," she recalls. "He says, 'No, I did not.'"

Chandra's mother also says that her own lingering questions about Chandra's murder make her wonder if Ingmar told her the truth that day. "I always think, 'I hope you got the right person,'" Sue says in the clip. "I have many, many… doubts about things because I have... lots of questions that remain unanswered to me."

It seems that the Levys aren't the only ones who might have unanswered questions: Recent developments in the case have sparked a re-examination of Ingmar's trial and conviction. "We can't really go into any detail about it," says Bob. "It's just, they're just checking some things out. Doesn't mean that he's not guilty. Or doesn't mean that there'll be another trial."

In the past, Chandra's parents alleged that Congressman Condit knew more about their daughter's disappearance than he had revealed to the authorities. Do they still hold that belief? Sue remains mum. "I have to be careful what I say because I don't want a lawsuit," she says in the clip.

Where Are They Now? OWN Video Own Oprah Winfrey Network Gary Condit 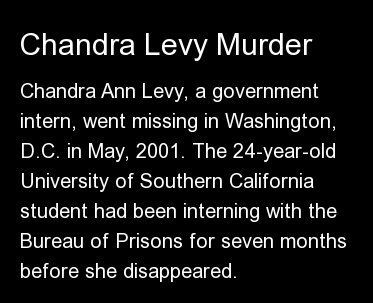 1 / 13
Chandra Levy Murder
Chandra Ann Levy, a government intern, went missing in Washington, D.C. in May, 2001. The 24-year-old University of Southern California student had been interning with the Bureau of Prisons for seven months before she disappeared.
AP Photo/Family Photo via The Modesto Bee