These days, our knowledge of celebrities too often originates with paparazzi images and snarky quotes by anonymous "insiders." After a while, it's easy to forget that stars are real people. That's why HuffPost Celebrity decided to launch the all-new #nofilter, a quick-fire question-and-answer serthies. Because how well do you know someone until they've shared their guiltiest pleasures?

Chelsea Handler is one of a kind. The 38-year-old comedian and actress knows how to make people laugh -- and has been doing it for years. Not only does she entertain audiences on her late night talk show "Chelsea Lately," but she's also a New York Times best-selling author set to release her fifth book, "Uganda Be Kidding Me," in March.

"It's all of my travel stories, starting with a safari I did with five of my friends. We went to Africa two years ago and we had a ridiculous time. And while I was there I was like, 'I have to start writing this stuff down,'" Handler told The Huffington Post of the book while promoting her partnership with 7UP TEN, which just kicked off a fun campaign encouraging consumers to forget about their New Year’s resolutions and instead give up nothing. "It's just a bunch of idiot American girls going to foreign countries and making asses out of themselves. So I thought, 'Someone should write about this ... wait, I should!'"

While chatting about her latest projects, Handler took HuffPost Celebrity's #nofilter challenge -- and proved she truly has no filter:

When's the last time you cried?
My friend was crying the other day, so I started crying. That happens when anybody cries ... I start crying. It wasn't about me, It was about them and I think they were crying happy tears and then I just started crying.

What's your guiltiest pleasure?
I don't have a lot of guilt, but I just bought a set of bunk beds and I put them up in my room upstairs and I slept in them last night for the first time. It's like a queen bed on the bottom and a queen on top with a ladder and I slept there with my two dogs and I read my book with my little night light. I mean, I felt like a 7-year-old ... it was so cozy and fun. My friends were like, "Why are you getting bunk beds?" And I was like, "Because, I can." I never had them as a child and I wanted them. I may move into that room.

What's the silliest thing you've ever lied about?
Oh, I lie all the time. It depends on what I'm trying to get out of. Oh, oh! I was in Barcelona and this guy had come to see me from London and I lied to him about having to go to a friend's surprise party in Barcelona ... I don't have any friends in Barcelona. I made up her name -- her name became Vivian -- and she had a husband and she had a daughter by the end of the trip named Molly. All of this to get out of going to dinner with somebody. And my friends were like, "You know you can just say you don't want to go to dinner, you don't have to make up an entire family?" But I was like, "It's just easier that way." But now that it will be on The Huffington Post, I'm sure we won't have any problems ...

What's one thing you do when you're alone that you wouldn't do in front of someone else?
I promise, I pretty much do everthing I shouldn't be doing in front of other people. Like sometimes I take a razor to my face and take off the blond fuzzies. And I'll do that at work, in front of people and people are like, "That's really something you should do at home." And I'm like, "Why would I do it at home where no one can see me?"

What happens in your recurring dream?
I have so many. Usually it's my parents trapping me in the basement of our house where I grew up in and I'm coming up the stairs and I'm screaming and yelling for them to come get me and they just ignore me. Which is kind of the story of my life. That's my recurring dream, but I have a bunch of really stupid ones, they're just so hard to remember when you haven't just woken up.

What or who is overrated right now?
I don't know ... Lady Gaga? No, now she's underrated, so that doesn't make sense. Who's overrated or what's overrated? I think iPhones are overrated right now. iPhones are a pain in the ass. They're really annoying, they keep spelling things differently for me, they're not picking up my spelling habits ... they're not picking up any of my habits. Everyone is talking about how great the iPhone is, but it's like I can double-check people, I'm on three-way chats that I never even wanted to be on and it's causing a lot of problems in my life.

Is a good friend hard to come by?
No, there are a lot of good friends out there, but people can be a disappointment too. You have to beware [laughs].

What's it like being friends with fellow celebrities? Does it change anything?
I think girlfriends are fun regardless of if they're famous or not. I mean, everyone hangs out with their girlfriends. If you're a girl's girl then you just want to hang out with a bunch of girls. If you want to have a girls dinner then it doesn't matter if they're famous or not. It's just fun, it's probably more fun. You don't have to deal with other people.

Describe one time you thought, "This is harder than it looks."
Acting. Being on a sitcom. There's walk-ins and an audience and I was like, "Oh, God!" Meanwhile, since I do stand-up comedy you think doing it would be no problem for me, but saying someone else's lines in this outfit, it just felt so weird and out of place. I like to be able to talk from my own voice, not someone else's.

Tell us a joke.
Is it okay to drink while you're pregnant if you're planning on giving the baby up for adoption?

What are you most afraid of?
I don't know, being told that I have to be on some sort of dance show. If I had to dance in front of people and it was televised, I'd be really scared. If I had to be choreographed, it would just be sad for all people involved.

When do you feel most at peace?
At work, with my dogs, anything in my natural life. At work probably, I love being at work.

What's the most unusual thing you have in your purse?
Let me look -- I got an iPad, a clutch, a candle, a wallet, my keys, nothing that unusual. Band-aids, if I hurt my self, Excedrin and my Invisalign.

What technology do you hope will be invented in the next 10 years?
Something that helps me turn on my television. I don't know why someone hasn't thought of that already.

Like a voice-activated television?
Yes, yes! That can understand me when I'm slurring.

Chelsea Handler's image is appearing in stores across the U.S. next to TEN sodas. 7UP TEN launched a series of quirky videos featuring Handler making fun of common resolutions (which are often quickly broken), such as going back to school, working out, etc. 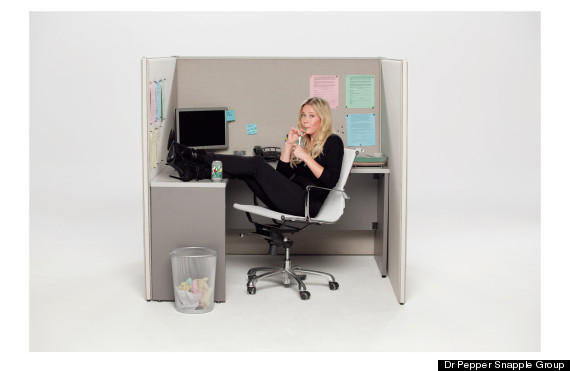 "Anything involving exercise or fitness or not drinking are resolutions I can never keep," Handler tells HuffPost. "Resolutions in general just don't work. I don't seem to have a good track record."