Already reeling from accusations of pandering to corporate advertisers, Britain's Telegraph newspaper is now under fire for withholding emails that might harm its friends in the Conservative government. The latest scandal threatens to further damage the Telegraph's editorial and political integrity and independence.

The Telegraph's extra-friendly relationship with the Conservative party dates back years. Just before the 2010 general election, as the Leveson Inquiry later exposed, the paper's chief executive, Murdoch MacLennan, wrote to David Cameron, the Conservative leader: "We desperately want there to be a Conservative government and you to be our next Prime Minister."

"We'll do all we can to bring that about and to give you great support in the grueling months ahead," MacLennan promised. He added: "And as we are no fair weather friend, we'll be there with you too when you're in Downing Street."

Last week the Telegraph's executive editor finally admitted to me that the paper holds internal email exchanges from senior officials at the Conservative Campaign Headquarters relating to child abuse. In so doing he contradicted Conservative Party Chairman Grant Shapps, who told me that after reviewing the situation he hadn't found "any evidence to substantiate" my claims that the emails exist.

The emails are so potentially damaging to Tory reputations that the political correspondent who was inadvertently copied in on them assumed the Telegraph would be publishing them, even assuring one MP that he was not the subject of the "silly emails." The paper is still sitting on the emails and, as far as I know, has not given them to Grant Shapps to read so that he can form a view of whether they amount to an attempt to smear Labour politicians, as at least one Telegraph insider has claimed.

That the Telegraph might spike a story that could damage the Conservative government should not be a surprise to those who read the evidence in the Leveson Inquiry.

The direct promise of help with newspaper coverage of the Conservatives during the general election campaign was outmatched by an even more remarkable offer made in March 2010 by Aidan Barclay, the chairman of the Telegraph Media Group. Barclay texted the aspiring prime minister, saying he had spoken "to Tony G'' (Tony Gallagher, then editor of the Telegraph). He said that "they would arrange a daily call during the campaign" between Cameron and Gallagher.

Later, Barclay explained it away, saying that if Cameron wanted "to get the attention of the editor [of the Telegraph] and wanted to get his message across in the most efficient manner, he should make a habit of calling on a daily basis and I recommended that that's what they should do." However, there was no suggestion at the time that such a call would be restricted to commenting on possible Telegraph editorials.

As it happens, Tony Gallagher was sacked by the newspaper. Though he is too discreet to say it, many think he was pushed out because he was too independent-minded, particularly when it came to editorial judgments on the Cameron government.

Of course, none of this email correspondence is conclusive when it comes to proving news bias. We have to read the Telegraph's news coverage of the general election campaign to show its determination to present the Conservatives in the best light and Labour in the worst possible light. No doubt the Telegraph will claim it did not hold back from outing Conservative MPs in 2009 over their Commons expenses and then say how tough it was on Maria Miller, who resigned as culture secretary in 2014 over her expenses. But of course she made the mistake of trying to bully the paper, which lost her all public support. There is now a huge gaping hole in Mr. Barclay's claims to the Leveson Inquiry that the Telegraph's news coverage and its business interests "do not collide" and that the relationship "is arm's length and transparent," giving no advertiser special favors in their news coverage.

There is clearly also a huge hole in the contention that the Telegraph's news coverage is "fair and balanced," and bears no relationship to what looks like a deal struck with the Conservative Party in 2010.

When it comes to its conservative leanings, no one denies the Telegraph is a paper with both "small C, and a capital C", as Mr. Barclay put it when he came before Leveson. But that is not what the debate is about: It is about the paper's much-vaunted claims to integrity and to impartiality when it comes to news coverage. And now that it is clear from Telegraph insiders and former insiders that the paper's news judgements about its own advertisers are distorted by commercial considerations, is it now possible to ignore the clear bias in its news coverage of politics? Gordon Brown complained to the Telegraph early in 2010 about such bias and "a lack of balance" in the paper's news coverage of the Labour government. The then editor-in-chief of the Telegraph Media Group, Will Lewis, responded in a staff email that editors had to be "cautious" and remain "fair and balanced" in the paper's coverage. But this did not happen and soon Lewis was replaced, anyway.

The facts speak for themselves. When the Telegraph had a sensational coup in 2010 that Vince Cable, secretary of state for business, innovation and skills, had declared "war on Murdoch," the paper's leadership shied away from publishing its own scoop. Cable's comments to undercover Telegraph reporters did not emerge until the transcript of their interview was leaked to the BBC's political editor, Robert Peston, who broke the story. How the Telegraph failed to publish its own world exclusive for fear of embarrassing David Cameron merely reinforces its chief executive's promise to be more than "a fair weather friend" and to "be there with you when you're in Downing Street." And when we look at the MPs' expenses scandal, we find something else: that on the first day of the Telegraph's coverage in May 2009, the first target was Labour Prime Minister Gordon Brown with a little-disguised attempt to bring him down.

In the MPs' expenses scandal, it was Gordon Brown who was to be accused of falsely claiming money for a cleaner, whilst David Cameron repaid £680 for having a wisteria trimmed on his country home in Oxfordshire. Mr. Brown, on the other hand, was pursued for days but subsequently received an apology that appeared in a small box far from the front page, where the original story splashed.

The Telegraph remains defiant over the latest scandals, claiming in an editorial that it will make "no apology for the way in which it has covered the HSBC group and the allegations of wrongdoing by its Swiss subsidiary, allegations that have been so enthusiastically promoted by the BBC, the Guardian and their ideological soulmates in the Labour Party."

Despite the belligerent denial that news coverage does not favor advertisers like HSBC and Sony, the paper has been exposed by its own current and former employees. No one should really mind much that in their text exchanges on the issues of the day, the Conservative leader and Mr. Barclay are so close that they exchange secrets.

However, the hypocrisy of claiming impartiality in its news coverage and the reality of news bias raises big questions about the Telegraph Media Group's integrity. As we approach yet another election in which the Telegraph seeks to promote the Conservatives irrespective of the facts, it cannot now go without challenge.

If the executive editor of the Telegraph really wants to retrieve the public standing of a 160-year-old newspaper institution, he can start by publishing the internal Tory emails. At the very least he should send them to Grant Shapps, so that he can form a view of the conduct of those who wrote them. 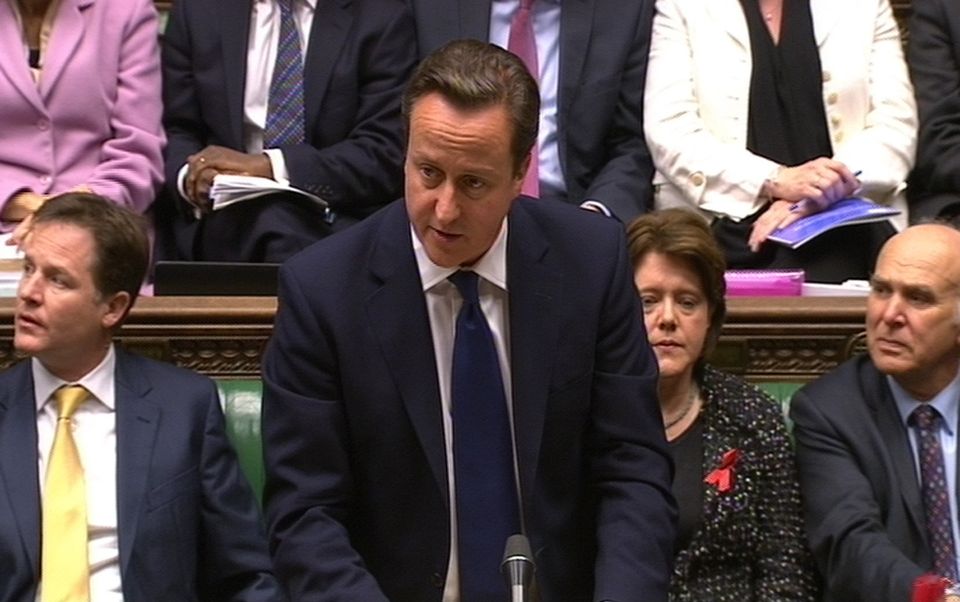 1 / 43
Leveson Inquiry
Prime Minister David Cameron makes a statement to MPs in the House of Commons in London on Lord Justice Leveson&#39;s Report from the Inquiry into the Culture, Practices and Ethics of the Press.
PA