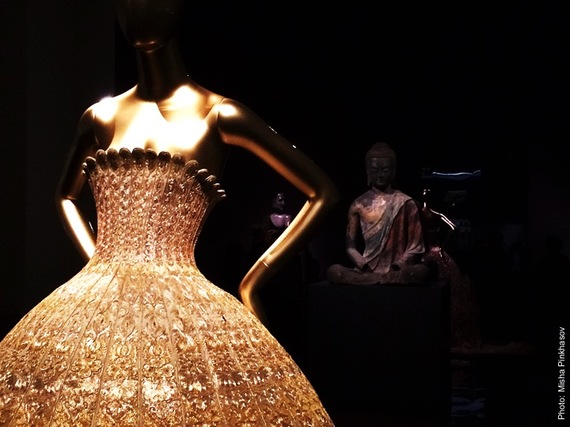 The Met Costume Institute's latest show merits a much more thoughtful wander than the crowds will allow. But do not feel that you've missed a learning opportunity.

The day after this year's Metropolitan Museum of Art Costume Institute Gala in New York, the carcass of a massive, white tent still dominated the monumental staircase up which Rihanna had paraded her much parodied gilded-egg scramble. And that mixed-up metaphor may well be the most accidentally iconic of an exhibition that scores a lot of easy points, but misses so many more important others.

First things first: this year's show, China: Through the Looking Glass, is huge, visually stunning and will be a tremendous success. The beauty of haute couture gowns interspersed throughout the Met's impressive Chinese art galleries is breathtaking.

The show merits a much longer and more contemplative wander than the crowds will allow, if only to fully take in the workmanship of the pieces on display. That said, do not feel you've missed a learning opportunity because, as is all too often the case with fashion, all that brilliance remains on the surface. You'll get the point of it from a simple walkthrough (in fact, you probably know it already).

That is quite a letdown from an exhibition whose opening description sets up complex themes of "subordinated otherness" between the "binaries" of a "simulacrum" West and an "authentic" East, only to drop them in favor of a "positivistic examination" of cross-cultural dialog. Translation: This is all very complicated so we're just going to show you some Chinese looking dresses. 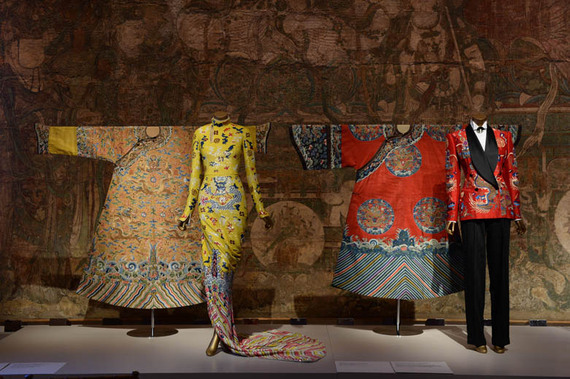 Despite liberal use of the word "interpretation" to describe the exhibits, there is a lot more application and appropriation going on here. And some comic misinterpretation. A Christian Dior gown stands in a room of ancient poetry on calligraphic tablets but is decorated in characters copied from a letter about a stomachache. As Fashionista reminds us, "When it comes to cultural appropriation and accidental racism, the fashion industry doesn't have the best track record." To be fair, the many Chinese visitors snapping selfies on the members-only opening day showed no discomfort.

As you read the texts on the gallery walls, the curators clearly see the intellectual shortcomings at hand, but it seems they are content to simply point them out rather than do the harder work of critiquing them and coming up with something new and enlightening.

For example, in a room dedicated to blue-and-white pottery, the contemporary gowns' hourglass shapes bear an uncanny likeness to the ancient urns that inspired them, well beyond just replicating the illustrations. Some, such as 2011 piece by Sarah Burton for Alexander McQueen, are even made of pottery shards. It is woman as utilitarian vessel; it is woman as fragile tchotchke; it is woman as luxury object; it is woman confined, broken and reconstructed. It rolls back two centuries of Western feminism with a silent scream about the upper-class subconscious. But apparently it merits no discussion. 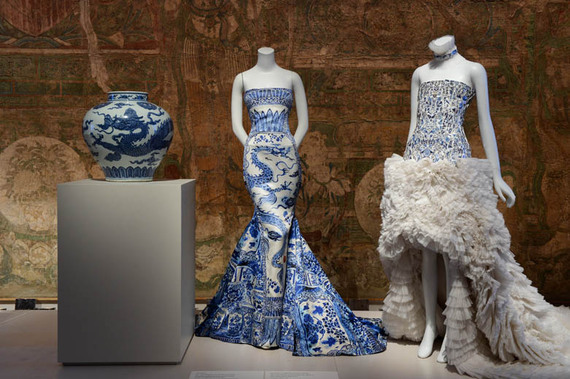 Perhaps that is too heavy a political point for an art museum to make. But there are others, more pressing and relevant to both the exhibition and the world today, which also go implied yet ignored. The Chinese luxury objects on display are centuries, even millennia older than their Western counterparts. It is a reminder to developed, Western countries that the exalted status they have enjoyed for over a century is not a birthright.

History will be quick to remind us that China, India, and the Middle East had rich and refined cultures while Europeans were still struggling through the material and intellectual poverty of the Dark Ages and before the existence of the Americas was even known to them.

Today we debate whether it is possible for a fashion or luxury brand to come from China. The heritage of these goods is French, Italian, and British, n'est-ce pas? But not so long ago, the luxuries these countries enjoyed - silk, spices, carpets, jewels - came from what we now call emerging countries. Europeans were just the ones who turned up with the gold (and eventually the guns) they used to get them.

And the exhibition is strongest in the last galleries, which display the work of contemporary Chinese designers, such as couturier Guo Pei, who spent two years making Rihanna's royal yellow robes. So the cycle may well come around again. 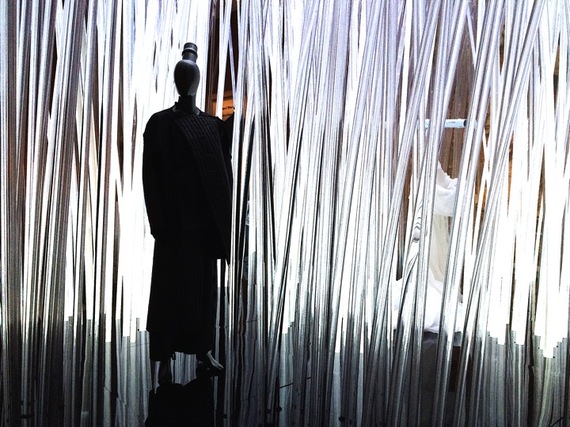 Which brings up another point: The demand for fashion and luxury drove the earliest waves of international trade, cultural exchange, exploration and empire-building, along with the less noble consequences of war, colonization and the slave trade. So this demand, more than simple conspicuous consumption, is a driver of change - either good or bad, depending on our intentions and level of self-awareness.

The title of China: Through the Looking Glass refers to the distortions that occur in stylistic cultural sampling and romanticized misunderstanding. But we know about that already. And like chateau-inspired McMansions, we associate it with cluelessness and bad taste. "This exhibition is not about China per se," says the Met, "but about a collective fantasy of China." But showing us our own fantasy is not enough. A show like the Met's should not succumb to the same naivety.

We count on it to meet us behind the looking glass and bring us out the other side with a better understanding of things. Instead, we are left wondering: Despite this celebration of cultural dialog, how thick is its accent? To what extent does it let superficial enthusiasm pass for real understanding? That is evidenced by the reaction of many Chinese commentators on both sides of the Pacific, left howling by celebrities' clumsy effort to reference the show's theme at the opening gala the night before.

The real "through the looking glass moment" is fashion's consistent ability to genuinely believe it is connecting with an issue while completely missing the point. As the museum says: "...designers are driven less by the logic of politics than by that of fashion, which is typically more concerned with an aesthetic of surfaces rather than the specifics of cultural context." It is fashion being so smug that it doesn't even know how much it doesn't know. And that holds fashion back.

Fashion should be fun, glamorous and all the things this show is. But in the end, the show has too much Vogue and not enough Met. You will come out stimulated, but not smarter. Which is ok if one of the world's leading cultural institutions is happy to reduce itself to a theme park and leave the more important show on the red-carpet outside.

A version of this article was originally published by Luxury Society.