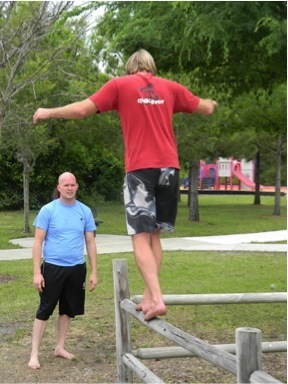 I like exercise, but I don't like gyms. I've even run in a blizzard to avoid a slog on the treadmill. I suppose the reason I feel this way is that gyms seem artificial to me -- the air conditioning, the thumping music, the way they encourage movements that bear little relation to the real world. Consider, for example, the number of times you have done triceps extensions or isolated bicep curls outside of a gym. Probably never.

I also think that a traditional gym environment may encourage cognitive passivity. Rather than being mentally engaged when we go to a gym, we often turn our Ipods on in order to switch our brains off, and drown ourselves in a haze of auto-tuned vocals and auto-tuned movements. You don't have to think to do a leg extension or a bench press, and this is often intentionally designed this way, as gym users seem not to want to think about what they are doing.

Available evidence supports this notion, showing that whatever the physical benefits of conventional anaerobic exercise, there is little evidence of cognitive benefits, particularly for working memory.

Working Memory, the active processing of information, is linked to performance in a wide variety of contexts, from grades to sports. Tracy's research has shown that the better your working memory, the better your results in contexts where you have to process information.

If you were a best man at a wedding, for example, and you discovered that you had left your notes for your speech on the kitchen table at home, it would be your working memory that would allow you to manage the stress of public speaking, and, at the same time, piece together information you know about the newlyweds in a witty and heartwarming manner.

The great thing about working memory is not just that it helps us in so many different ways, but Tracy's research has suggests that it can be strengthened much like a muscle. And, in contrast to conventional anaerobic exercise, certain physical exercises can improve working memory.

Studies indicate, for example, that running improves working memory, and brain scans have shown the home of working memory in the brain, the Prefrontal Cortex, fires, when running. This is possibly because to run without falling flat on your face, you have to use your working memory to process visual information in your immediate environment and how your body is moving through it. This awareness of your body position and orientation is known as proprioception (more on that later).

When Tracy and I found out about the cognitive benefits of running, years ago, we quickly picked it up, doing it almost exclusively. But after month or so, I became bored with pounding the pavement. I felt there was something missing in my exercise, as if my body was capable of doing a lot more than putting one foot in front of the other.

This was the antithesis of most of the stuff I had seen in the gym, and it made me realize how far removed modern exercise culture was from the world humans used to inhabit. In the natural world, a leg extension, a bicep curl, is about as useful as a cell phone without bars.

When watching it, I saw jumps, climbs, and sprints, but also an adaptive engagement with a complex environment. I saw proprioceptive skills, processing of visual information, planning, and rapid decision making. Knowing that such movements required working memory, we wondered if they might also improve working memory.

But there was a big problem: to test this hypothesis we had to have participants, and very few people are capable of performing the seemingly dangerous Tarzanesque movements on the video. Fortunately, as I found out, Movnat, the company that produced the video, also teaches a much more sedate version of the movements that doesn't put participants' lives in mortal danger.

Find out what happened next when we discuss the experiment and the unexpected results in Part 2...