Peter Schweizer claims to be non-partisan, but is really a right-wing political operative. 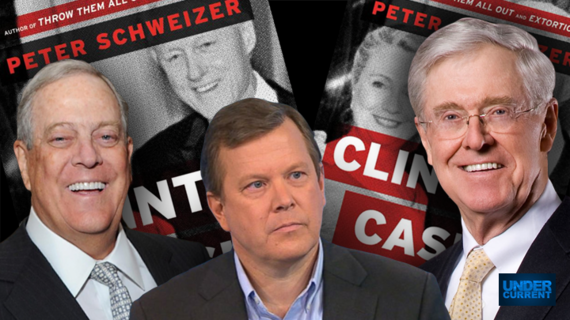 The road to 2016 will be a bumpy one for Hillary Clinton, despite the dearth of competition in the Democratic field. The Republican offensive has been ongoing since the 2012 Benghazi attack, and has gained steam in recent months with E-mailgate, and now "Clinton Cash: The Untold Story of How and Why Foreign Governments and Businesses Helped Make Bill and Hillary Clinton Rich." The book's author, the conservative consultant and activist Peter Schweizer, maintains that "Clinton Cash" is non-partisan.

But according to audio obtained by The Undercurrent and Lady Libertine from a source who was present, Schweizer spoke at a political strategy summit for the Koch brothers last summer, urging donors to relentlessly pursue the left and rallying them ahead of a big fundraising pitch. His own organization, the Government Accountability Institute receives funding from Koch-funded groups.

As he has in several speeches as a lifelong conservative, Schweizer was espousing his view that conservatives should be informed, engaged, and active.

Kevin Gentry, the emcee and a vice president of the Charles Koch Foundation, later named "competitive intelligence," the business terminology equivalent of opposition research, as one of the enumerated Koch political investment areas.

Despite an admitted lack of direct evidence, Schweizer's allegations have been given a turbo boost in beltway media circles by the veneer of credibility from exclusive partnerships with the New York Times, Washington Post, and Fox News, causing substantial turmoil for the Clintons and their foundation. In response, the Clinton campaign and allied organizations characterize Schweizer as yet another right-wing hit man. He in turn points to his forthcoming exposé on Jeb Bush.

Although the Kochs have not explicitly endorsed a 2016 presidential candidate, media speculation rests heavily on Scott Walker. Asked whether Schweizer is investigating Jeb Bush at the behest of the Koch brothers, Bardella simply said, "No."

Schweizer is also the president of the Government Accountability Institute (GAI), a right-wing opposition research shop that receives money from the Koch-funded Donors Trust. The draft agenda published by this reporter in The Nation last June listed Schweizer as a speaker at the their biannual gathering of millionaire and billionaire donors.

Schweizer's speech, entitled "The Stakes: Who Will Define the American Dream," teed up the Kochs' appeal to raise $290 million in donations for their fundraising hub, Freedom Partners, its affiliated network of non-profits, and a newly created super-PAC called Freedom Partners Action Fund. Bardella declined to answer whether Schweizer was speaking in a fundraising capacity for GAI, or whether Schweizer or GAI received any funds from Koch-affiliated organizations.

Stephen Bannon, the director of conservative propaganda films like the Sarah Palin biopic "The Undefeated" and a frequent collaborator with Citizens United Productions, chairs GAI's board. Another GAI board member is Ron Robinson, who also sits on the boards of Citizens United and Citizens United Foundation.

Citizens United Productions was the plaintiff in the Supreme Court case Citizens United v. Federal Election Commission - the decision that rolled back significant campaign finance law pertaining to independent expenditures. At the center of that landmark case was a political documentary-cum-attack ad on Hillary Clinton called "Hillary: The Movie," released ahead of the 2008 primary. Now nearly eight years later ahead of the 2016 primary, Schweitzer has published what could be considered the follow-up, Hillary: The Book.

At the conference last summer, a source said that the Kochs were raising $500 million to take back the Senate and $500 million to make sure that Hillary Clinton is never president. What seemed like an exaggeration at the time now appears to have more veracity, given that the Kochs have disclosed that they plan to raise nearly $900 million for 2016. Peter Schweizer has said that he has been working on this book for the past year, which would put the start of his research to right before the Koch conference.

Click here for the text transcript of Schweizer's remarks, and here for the full responses from Kurt Bardella on behalf of Peter Schweizer.

(Disclosure: Aside from reporting on The Undercurrent and Lady Libertine, I am the executive director of a progressive non-profit called American Family Voices, where we advocate for a populist economic agenda. The president of AFV is Mike Lux, who formerly worked in the Clinton administration.)