WARNING: Major spoilers ahead. Do not read on if you haven't seen the Season 1 finale of "The Knick."

"The Knick" ended its 10-episode debut season on Friday, and the hope each character found in his or her new beginnings was bookended with a sense of dread. Thackery discovers an unfortunate way to kick his cocaine habit in the form of 1900-era heroin. Barrow bests Bunky Collier, but Mr. Wu learns of his manipulation. Cornelia's wedding day arrives, but she's haunted by the thought of her clandestine abortion and her feelings for Dr. Edwards. And Edwards himself is given the chance to shine while Thack is out of commission, but he's left bloodied in the streets, knowing Cornelia is off vowing to love another man. No character wins, but the show surely does. This was a stunner of a season finale, exemplifying the best of Steven Soderbergh's slow-burning drama. HuffPost Entertainment caught up with star Clive Owen, who plays Thackery, to discuss the finale.

Did you study cocaine withdrawal to decide what that would look like once Thackery's supply runs out?
I did as much research as I could. The great thing is that cocaine shortage again was based on fact. Everything in the show is inspired by real events. The idea of starving Thackery of his drug and then coming back and this more than ever was a brilliant way of climaxing. To go through that period of struggle, of not having the drug and then getting it and taking too much, was always, I felt, a great way to build him toward the end.

Nurse Elkin's role in procuring cocaine is fascinating. Does Thackery really love her, or does he only appreciate when she can do things for him?
I think by that time he’s a desperate addict. When she delivers that and when she finally comes through with the cocaine, he’s like, "She’s the most beautiful, loving person." He’s a desperate addict by this point. Just the fact that she’s delivering what he needs is everything.

We see him compete to advance various surgical procedures, but he does it mostly out of ego so he'll always be considered the best. How much does Thackery actually care about medicine?
I really do think by the ending couple of episodes that he’s completely lost his way. He’s a complete paranoid, competitive mess by the end. He is brilliant, but by this point he’s in a desperate place and he’s not thinking straight. That’s kind of where we’re taking him -- he’s heading for a fall.

Many of the surgery scenes are both graphic and relatively primitive. Is there a doctor on set guiding how they should look?
Yes, we had the most amazing expert, a guy called Dr. Stanley Burns, who runs this archive of literally hundreds of thousands of photographs from this period in the world. The show is like his fantasy come to life. He has an unbelievable wealth of material; he has medical documents that were handed between doctors at the turn of the century, he has instruments that were used at the time. He was there for every single operation and would be able to describe exactly how it would have been done, so we leaned on him tremendously.

That blood-transfusion scene in the finale is wild. Surely some of that is CGI.
Really, I have to say that the prosthetics guy on this thing did an absolutely unbelievable job throughout, and there’s so little CGI in this whole series. Everything is totally convincing, even to the naked eye, including that transfusion scene. That was the one scene where I remember I turned to Steven at one point and said, “How on earth are we ever going to bring back Thackery from this?” Will we ever be able to redeem him from this? I mean, in such a coked-up state, to be attempting something like that with this poor little girl, it’s a wild as it could get. But that’s the make of the show.

Do you think Bertie made the right choice in remaining so loyal to Thackery, especially at the end when he realizes what's been going on?
It’s difficult because Thackery does eventually go off the rails, but there’s no question that, at the beginning when we meet him, Thackery is a genius. He’s learned an incredible lot. That’s the journey of what happens, but there’s no question that Bertie would have learned an awful lot, but he’s also had to withstand an awful lot. 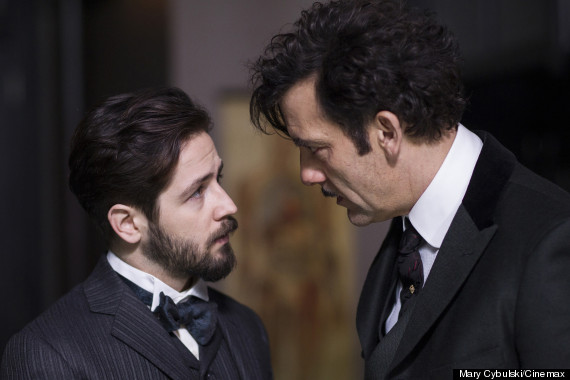 What do you think happened to Abigail and her syphilis nose?
We might not have seen the last of her. I won’t say any more on that.

We've seen shocking surgeries all season, but the most jarring moment probably comes when we see that Eleanor's teeth have been removed because that's how doctors thought they'd cure mental illness.
I agree with you. It is shocking, and what’s shocking is that that was the practice at the time. That was real. They actually really did think that. And the scary thing, when you do a show like this, is that what we’d be doing in 40 or 50 years’ time would make us think, "How on Earth could we have thought that was right?" How on Earth could a doctor really have believed that?

It must be hard to shoot in contemporary downtown New York but make every scene look and feel like it's set in 1900.
Steven has just the most incredible people around him that he’s been working with for a long time. What was really incredible is when you film on one of those outside days, you’d come to the exterior of the hospital and you’d walk on and everything would already be up and running. You’d do a shot in the carriage and it would pull up and you’d get out and 20 minutes later we’d be on to something else. It was so incredibly efficient, and they were so focused in getting those big outside scenes nailed so quickly. There were very challenging days -- we were shooting real New York Chinatown for 1900 Chinatown. We’d find a block in there that we’d dress and shoot, but you can imagine the logistics of trying to pull that off. They went in there and they were just incredibly together.

What's the most fascinating thing you've learned about medicine in 1900?
The thing that you’re kind of left with is just how much they were shooting from the hip. It was a time of change; things were coming big and fast. They were rethinking things on a weekly basis. At the time, doctors were sharing information across America and Europe. It was a wildly exciting time in terms of the breakthroughs they were making, probably this time in this period more than any other period.

You've worked with Robert Altman, Mike Nicholas, Alfonso Cuarón and Spike Lee. What does Steven Soderbergh, the consummate multitasker, bring to "The Knick" that no other director could?
I think the reason no other director could have taken this on and done it the way that he did it is that he has done everything. He directs, he operates, he lights, he edits, and it’s a singular vision. It’s 10 hours of television that completely comes back to one man and a singular vision. To have that is really extraordinary because I don’t know of any of the other directors you mentioned or any director that I’ve worked with who could do that and could hold the whole canal like he approached it at the speed with which he approached it. And he dealt with something so rich and detailed. He’s extraordinary in that way; there is no one like him. For an actor to work with that is a real privilege because he’s so on top of all aspects of what’s going on that you’re kind of left just worrying about your acting, which is a great place to be because you’re so sure. It’s a one-stop gig. You know that it all comes back to him. There’s something kind of great about that, about shooting a scene and there not being that dialogue of, “What if we did this?” or “What if we did that?” No. It goes back to that guy and his vision and his taste and his talent. I’m telling you he’s a hugely, hugely impressive person.

When does Season 2 start filming?
We go into pre-production soon and I think I’m heading out to New York for January.

What do you hope to see in Thackery's future now that he's been exposed to heroin?
He's been so edgy in his story and so visceral and dangerous. What’s great is the idea of being able to go into the next season and it could just pick up and hit the ground running, taking it further and exploring new territories. I’ve got a number of the scripts already and it’s just really exciting where we can take it.