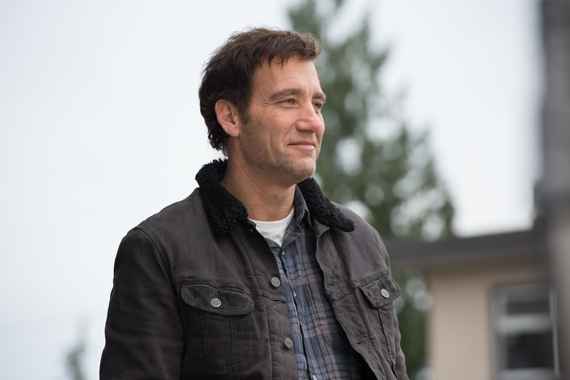 Oscar nominee, Clive Owen certainly has his choice of roles. From his hit limited series The Knick to his latest role as Walt, in the film, The Confirmation, (which just hit theaters and is available on VOD), Owen is always captivating on screen.

In The Confirmation, Owen portrays a father battling with alcoholism while raising a young son who struggles with opposing views of Catholicism.

I had an opportunity to connect with Owen about the role, why he chose this film, ask what it was like working with such a strong young co-star, and who was his personal inspiration for his career.

Why did you choose to do this film? You have so many options.
It's always the same thing; it's script and director. I was sent the script. I had seen Nebraska and loved it. It was a beautifully written script--it was funny, it was touching, it was poignant, it was moving, it never veered into being sentimental - and I was just very taken with it. I got on the phone with Bob Nelson, and he came across as the nicest guy, and I thought that's a guy I want to be around for a while. I loved the material, and it was an easy thing to say yes.

You had such chemistry with Jaeden. What did you do to sort of create that chemistry on screen?
It's a mutual thing between the two of us. We ended up getting along great, but also, you know, I've worked with a lot of young actors in my time. It's important for them to develop trust early on, that you feel ease with each other; it's the most important thing because you can act all you like, but at the end of the day it's those little moments of warmth and ease that really sell the fact that these people are related, so that's important.

It helps that I had seen Jaeden's audition and, to be honest with you, I'd been blown away. I was so excited when I saw it because for someone so young, he's already the full deal. He's already really honed, and he's already treating it like a craft. It's unerring really just how mature he is as a young actor. And, believe it or not, we've got the same sensibilities about what acting is. He doesn't overplay things; he has incredible restraint for someone of his age. It was a joy to work with him every day.

There's a particularly touching scene in the film when you're sitting on the porch with your son and you're tearing up. What were you thinking in that scene as an actor or as a character to really be in that moment?
I always had that down as one of the most important scenes because it's where they're at their most vulnerable, really, and Walt has really messed up the night before and gone through something really...and you really see the love and caring toward your son; and you say, okay, this character is really flawed, he's got some real demons he's battling with, but ultimately he's a good person and wants to do good by his son. It's, to me, kind of the heart of the movie.

Who inspired you and encouraged you when no one else would?
I come from a very working-class family, and I sort of fell in love with acting. I had various people along the way who inspired me to become an actor, but believe it or not, a huge inspiration to me when I was very young was David Bowie. I often say he was more reason for me becoming an actor than any actor, really, because he inspired my imagination and he made me realize that anything was possible. When acting opened up to me, I sort of carried it into that. So, when I look back and think who was an inspiration, David Bowie was a very big inspiration to me.