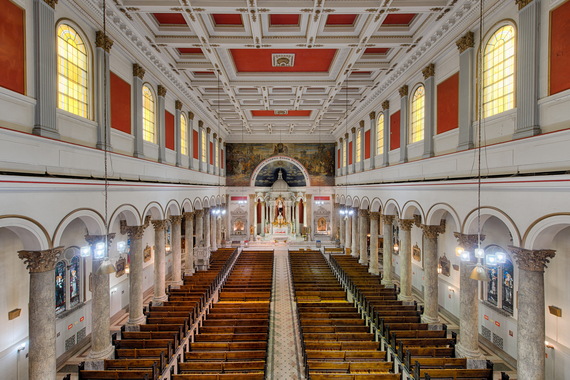 "Trending Now..." is a familiar category in pop culture. It usually refers to fashions of this season replacing those of last season, or changes in products for musical or film audiences new since last year's awards season.

In the religious world some "trending now" is that-kind-of trendy, but, in general, historians of religion deal with changes through centuries more than through mere seasons. Therefore, some writers for Sightings pay attention but are not captive to trends reflected in, say, political-religion polls. Those longer looks notice changes that appear to be gradual but have long-term significance.

Recently in Sightings (Jan. 25) we noticed the natural (demographic, etc.) factors in the shuttering and abandonment of numberless rural churches, whose members have moved away from their locales, or died. This week we look at urban counterparts, which also may be subject to constant change, abandonment, or destruction.

Sightings today observes the home territory of its host headquarters, which means metropolitan Chicago. Fear not, this column is not going to turn provincial and ecologically self-centered. One could notice and write about similar long-term trends in, say, Boston or New York or Detroit or Philadelphia, which are often subject to scrutiny in "Trending Now..." columns.

Two front-page or section-front articles in the Chicago Tribune this February (Feb 7 and 8) inspired these comments.

Patrick T. Reardon followed this with a full-page "The future of the Chicago Archdiocese," featuring a half-page picture of Chicago Archbishop Blase Cupich, who has the unwelcome task of closing churches which are underused, underfunded and victims of the priest-shortage "trend."

Pictured also is the crumbling church of St. Adalbert, a grand relic of Polish communal solidarity, which survived in a Latino neighborhood. The church is cherished by the few remaining communicants and nostalgic Catholics who have moved far away and hence lost their ties or any occasions to return except for "Save St. Adalbert"-type rallies. Not a chance.

This trend is by no means only Roman Catholic. A personal sample: during my post-ordination but still graduate-student days in the Chicago of the 1950s and 1960s I moonlighted in a dozen Lutheran parishes, and saw them struggle with sudden change as most white parishioners headed for the suburbs (where later as a suburban pastor for seven years I was on hand to help serve them and help them serve). Far from seeing all "white flight" inspired by anti-black racism, obvious though some was, I came to see up close other aspects of the change. Our members and judicatory leaders did what they could to fight red-lining and other practices by realtors, both Euro- and African-American, with politicians thrown in for bad measure.

Vivid to me still are examples of bonding that occurred between senior "white women" who could not afford to move or who loved their waning congregation and its place, on the one hand, and new energetic African-American members and pastors who did what they could to keep serving, but now with diminished resources.

Most of these stories do not end with demolitions of the sort that may await St. Adalbert and its cousins. In many cases, truly vital largely African- or Hispanic-American congregations took over and did and do their best to serve the people and their God in the "Trending Now..." dynamics of this or any other typical metropolis.

We do well to focus our sights on them, whether in Charleston, South Carolina, or North Philadelphia or South Chicago or North Milwaukee, or wherever worshipers take and deserve a longer look.