The Korean-American artist's signature artwork, "Comfort Hair," doesn't come with a tiny beating heart, if that's what you're thinking. The "live" modifier refers to the fact that the sculpture is more performance that stationary object. The piece requires a person -- a wearer -- to make the work whole. And when wearer meets sculpture, meaning pours forth. The massive pile of dark, woven hair becomes a totem of cultural identity, and a visual reminder of history's obsession with long flowing locks. 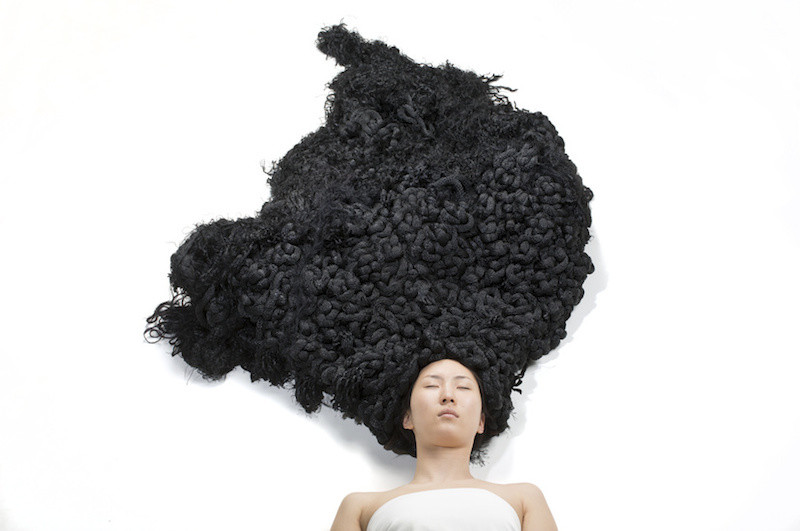 "Comfort Hair" was inspired by the Korean practice of wearing a gache, a large, heavy wig typically found on the heads of wealthy, high society women. Like these raven-hued fixtures that epitomized the "bigger is better" mantra, Lang's sculpture appears like a massive pile of hair made from polypropylene rope that sits atop a model's head for one hour at a time.

The gache is just one historical example that illuminates humanity's greater obsession with manes, mops, curls and tresses. Over the centuries, "hair has symbolized so many different things," Lang told The Huffington Post, despite the fact that the only "living" portion of hair remains hidden inside the follicle. "The obsession we have with our dead hair that we imagine to be full of life is fascinating. It is the part of the body that has no nerves or muscles but has movements and rhythm that feel alive. When you cut it off there is no pain and it does not bleed. Yet, we perceive it as a sacred entity." 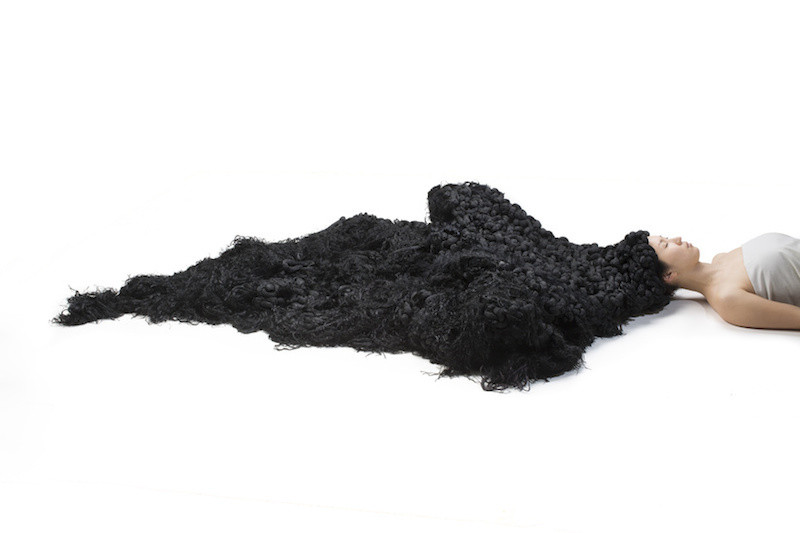 While history at large has undoubtedly obsessed over hair -- from yesterday's Victorian wigs to today's Instagrammable cuts -- hair is, of course, as much a personal experience as it is a shared one.

"'Comfort Hair' was conceived because of the way I was brought up, as a third culture kid," Lang explained. Third culture kid (TCK), she elaborated, is a term used to refer to people who have spent a significant amount of their developmental years in cultures other than the ones they were born into. "Being a Korean growing up in China, going to an American International school, I was sorting through three different cultures to makes sense out of my own. The amalgamation of these three cultures has become my personal cultural identity."

According to Lang, the thing that makes the TCK experience so unique is that it involves tough questions regarding personal cultural identity -- even confusion -- at a very early stage in your life. For Lang, this first happened when she was three years old. "It is truly unique in the sense that these individuals are moving between cultures before they even have the opportunity to fully develop their personal and cultural identity," she said. 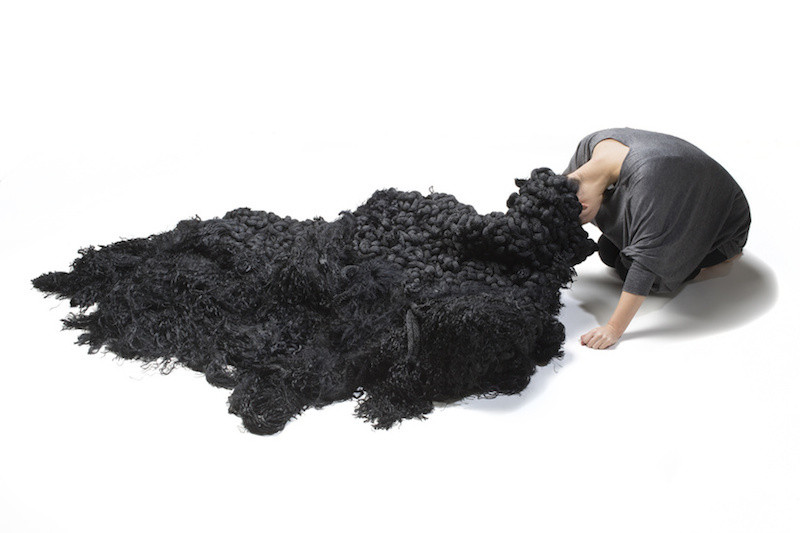 After each "Comfort Hair" performance, Lang tells us, the wearer ceremoniously sheds the gache-esque work. "The action of shedding the hair piece is like shedding a layer of skin," she added. It’s the same idea behind a reptile shedding its skin regularly to allow room for growth. "The main reason for shedding is that their older skin does not grow with them, so in order to grow they need to shed the old, allowing the new skin to form below the old one. This is the idea behind the performance. Our identities are ever evolving and growing and it is a crucial part of the growth that we also shed a layer of us behind."

"I fantasize about my hair," Lang concluded. "It stands in for my cultural identity which is becoming an organism that continues to grow and prosper. Hair is always personal and my work is definitely very personal."

Photographs of "Comfort Hair" will be on view at John Michael Kohler Arts Center in Sheboygan, Wisconsin, as part of the "Towards Textiles" exhibition, until Oct. 11, 2015.