Nepotism makes the world go round... the world that matters anyway.

And though Hollywood is notorious for its nepotistic tendencies and keeping it all in the family (example: Will and Jada Pinkett-Smith) there are a few other humdingers out there that will make you go hmm...

Whether it's all in the name or actual talent, you can decide for yourself with Complex's Guide to Nepotism.

For more go to Complex.com 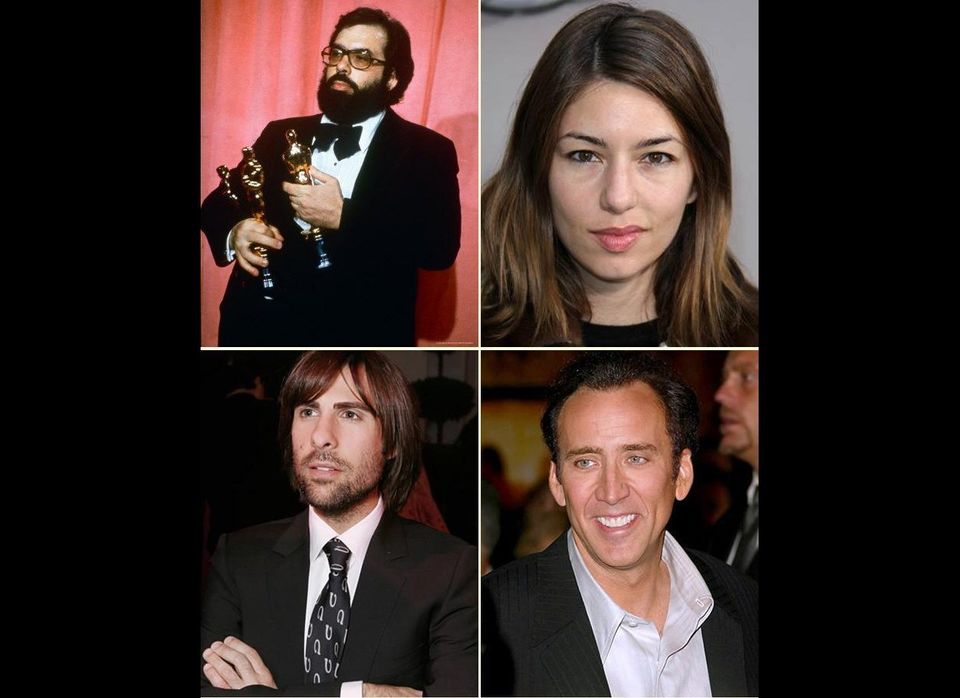 1 / 10
Francis Ford Coppola
Francis Ford Coppola (father/uncle) / Sofia Coppola (daughter) / Jason Schwartzman (nephew) / Nicolas Cage (nephew) Academy Award winner Francis Ford Coppola is the man behind some of the greatest cinematic masterpieces of our time. From the Oscar winning The Godfather to Apocalypse Now, and even Bram Stoker’s Dracula, Coppola has managed to keep us intrigued, interested, and a tad bit annoyed. And all the while as he spun his movie magic, he’s launched the careers of those around him. His nephew Jason Schwartzman, son of Coppola’s sister Talia Shire (Rocky), got his big break when he was 17 when he was cast as the star in Wes Anderson’s Rushmore with no prior acting experience. He was brill. Since then he has been in several films, including a few of Anderson’s as well as Marie Antoinette directed by his cousin, Sofia, and currently stars in HBO’s (cancelled) series Bored to Death. Nicolas Cage, aka “My Guilty Pleasure” is Coppola’s nephew via his brother. He changed his name to Cage to avoid the appearance of nepotism, and even lost out the role of Dallas Winston when he auditioned for Coppola’s film The Outsiders to Matt Dillon. But not to worry because Coppola cast Cage in Peggy Sue Got Married and Rumble Fish. Cage proved himself a formidable actor with his performances in Raising Arizona, Leaving Las Vegas, and Adaptation, but has managed to bury many of these wonderful acting memories under bad hairpieces, strange period roles, and Disney films. The only daughter of Coppola, Sofia is often cited as a career based upon nepotism. She appeared in seven of Coppola’s films with the most notable being the role of Mary Corleone in The Godfather Part III, which she took over when Winona Ryder fell ill. Blessing in disguise? Panned for her performance, Sofia abandoned acting and saved us from seeing her work in front of the camera. She is now safely hidden behind the lens as a director and screenwriter of slow, somewhat boring, and narcissistic works such as Lost in Translation (thank goodness for Bill Murray), Marie Antoinette and Somewhere. Image from Complex.com