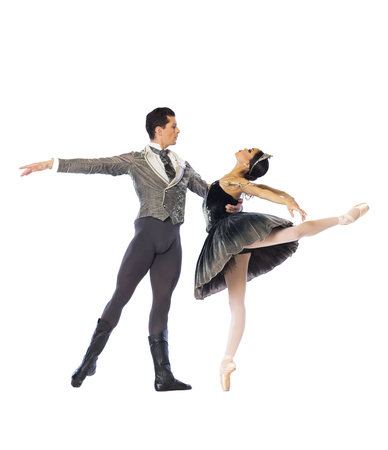 Conductor Scott Speck is with us to talk about the music of one of the most famous ballets of all time--Swan Lake. He has been in rehearsal with Chicago's Joffrey Ballet, and they will open October 15th doing Christopher Wheeldon's version of this ballet classic. We're excited to share a deeper look at this wonderful Tchaikovsky piece with you here...

This is one of the big story ballets. Is there more preparation involved in conducting a piece like this than in doing a mixed rep program? Why or why not?

More preparation is involved, but not because it is big. This is one of the most specific​ ballets of all time, meaning that this ballet has an inordinate number of special moments, solos, pas de deux (and trois and quatre....) that require very specific attention to what the dancers are doing onstage. In addition, each dancer has a personal mode of expression within the choreography, and my goal is to create the musical backdrop to support that expression and allow it to shine. For that reason, each moment requires several different kinds of preparation--and that makes Swan Lake one of the trickiest pieces to conduct in the whole history of ballet.

Tchaikovsky's music is well-known and well liked. Can you talk a bit about him as a composer?

Tchaikovsky was the essence of the Russian Romantic era. He wore his heart on his sleeve, and his unforgettable melodies are full of the most honest expression. It's like listening to an old friend pour his heart out to you. I think that's why people love Tchaikovsky so much.

It was with pieces like Swan Lake, his first work for the Bolshoi Ballet, that Tchaikovsky burst upon the musical scene. He was very influenced by Ludwig Minkus, his extremely talented and facile (yet much less deep) predecessor at the Bolshoi. Minkus's clever and tuneful music to La Bayadere, which the Joffrey performed last fall, had recently premiered.​ Minkus was a master of miniatures--those wonderful short characteristic movements that create a mood and atmosphere in a very short period of time--and in Swan Lake, Tchaikovsky was able to try his hand at the form. Although his "foreign"-sounding characteristic dances--Spanish, Neopolitan, Hungarian. etc.--are probably not as idiomatic as those of Minkus, Tchaikovsky allowed his true character to show in the body of the ballet.

And so, in most of Swan Lake, you hear the same personality that you can hear in the 6 symphonies, multiple operas, concertos and tone poems that Tchaikovsky is famous for. In other words--when he wasn't trying to imitate Minkus directly, he appeared clearly as the immortal composer that he was.

Joffrey worked with choreographer Christopher Wheeldon on this version of the ballet. Is there anything different here musically?

Yes, We are still using the original Tchaikovsky, but Chris has created a more streamlined version of the ballet--it moves very excitingly from beginning to end. Some of the movements are in a different order​ than listeners may expect, but all the favorite melodies are intact, Most ballet companies do cut the music somewhat, as the full score would take about three hours to play.

Is there anything that the audience can listen for musically in terms of distinguishing Odette and Odile?

The character of Odette is presented as very elegant and poised, with great control; and Odile is very confident, with bravura technique. To a certain extent this is reflected in the music. For example, both the White Swan (Odette) and Black Swan (Odile) have a pas de deux with young Siegfried, and each pas de deux features a violin solo. In the White Swan Pas de Deux, the violin solo is extremely elegant and mingles beautifully with cello and harp. But in the Black Swan Pas de Deux, there are moments of astounding virtuosity for the violin. But other than that, I think that most of the distinguishing characteristics are visual.

What are the most challenging parts of this ballet in terms of the orchestra?

We are so lucky to have the Chicago Philharmonic, which has been called one of the nation's finest symphonic orchestras, playing for us in the pit. These musicians can really do anything. My challenge will be the communicate the specific needs of the stage, with my baton, to musicians who cannot see the dancers. That communication will be most important in the pas de deux and solo movements, which can vary the most from show to show. These movements will require the most lightning-quick reflexes from all of us.

What do you enjoy most about conducting this ballet?