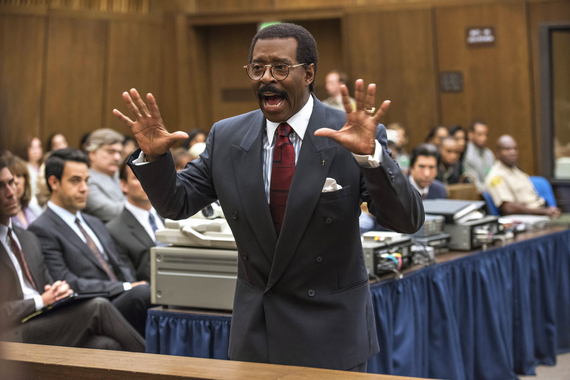 Tony Award-winning actor, Courtney B. Vance has been in the game for decades. He's always been known as a solid actor, an Image Award and Independent Spirit Award nominee, and one of the stars of the classic television series Law and Order: Criminal Intent, but rarely has been given the opportunity to really shine. Shine he has in a role he was born to play, as Johnnie Cochran, the head defense attorney in the O.J. Simpson murder trial.

In his award-worthy performance, Vance sweeps the audience away in his portrayal of the man who had the charisma of a television evangelist and the strategic wit of a 5-star general. He effortlessly shows the strength of the man's marriage to his wife while juggling the internal politics that were involved with representing such a high profile client.

I had an opportunity to talk with Vance about shooting The People v. O.J. Simpson: American Crime Story, an FX limited series, based on the book The Run of His Life: The People v. O.J. Simpson by Jeffrey Toobin. We also discussed his roots in the theater, what it took for him to play this role, thoughts on the conversation around diversity in Hollywood, what he sees as the solution and his advice to aspiring actors today.

What do you do to prepare for a role like this?
It depends. One time I did a play, and it was 200 pages, and we had three weeks, and I didn't know where to begin. I had another role where I had to do a 20-minute monolog in a South African accent - and I knew nothing about South Africa. Where do you begin? Do you do your research first? Do you work on memorizing the monolog first? Do you get the dialect? What do you do? That's the process. You have to take it and sit with it and listen and see which is the best way to go. When I got this one, I thought, where do I start? So I just picked up Jeff Toobin's book, and I read it cover to cover a couple of times, just to immerse myself, and then I went to other books. I stayed away from video. I didn't want to be influenced by the actual footage because I'm not Johnny Cochran, I'm me. I can suggest him and allow the audience to enter into that world through the tremendous writers and producers and all the craftsmen and women and designers who put us in clothes and wigs. Once everyone did their thing, I said I think I will be all right. I will not get in the way of the story. I will be able to take a journey, and that's all I could hope for.

Did you walk away with a different idea of what happened with the murders than you did when you began?
Absolutely. I knew nothing. I didn't follow the trial too much. Much like 9/11, it was just overwhelming to me. My wife sat there and watched it day after day. I just...I couldn't do it. I saw it and I said, "Ugh, I'm going to break down if I stay in front of this television," so I had to walk away. I was in Sacramento doing Panther, and we all were transfixed. We were watching the NBA Finals, and all of a sudden it was preempted, and then after that, we realized something had happened here; we're going to be living with this for months. I made a decision not to be in it, but came back at the verdict. The jury consultant on the case told the prosecution and the defense that this case is about nothing but race - not domestic abuse, not celebrity - it's about race and police brutality. When Marcia Clark didn't listen and when she was up there parading the witnesses about domestic violence - which is very real - the jury just looked at her impassively because it wasn't about domestic abuse for them. It was about race...

Let me ask you a question about Hollywood. How do you think the reality of how Hollywood works differs from the public's view of how it works?
Well, it's a business. They're trying to make money. They choose films based on whether or not there will be a return on investment. They want their money back, and they're choosing films that they feel people will go to see and they'll get the return in one of the markets. What's painful is that when those decisions are made, it depends on who's at the table as far as which films are greenlit. If African Americans were in charge of Hollywood, we would choose films that would benefit, potentially, African Americans, but African Americans are not the majority of the people. Every now and then there are one or two films, and what's painful is those one or two films, we put all of our hopes and dreams in those one or two films, and when they're not chosen as the one that was nominated this year, you go, "It's not fair." Well, that's not where the work starts. The work starts up at the table when they're making decisions about which films are we going to choose this year out of this group? We're not even in that group, and we're not at the table. So, our job - it's a long-range job - is to get more people at the table and, in terms of voting and the Academy, get more people in the different branches; and that's a long-range journey that has to begin. My wife and I are in the Academy - and we need to begin the process of every year making sure there's someone that we sponsor. If you're not in the game, you can't complain. You gotta get in the game.

If you were to give advice to today's aspiring actor who wants to be successful, what would you say?
I'd say you have no excuse today. We didn't have all those vehicles to be able to work in. We didn't have Amazon and Netflix; they're making their own movies now. You can get together with any number of people and do small projects. You can work with the universities and cut your teeth there. All I knew when I was coming up was that I wanted to do it and I was going to, wherever I was. Whatever city you're in - if you're in Albuquerque or you're in Detroit, you're in Chicago, or you're in Winston-Salem - they do local community groups and films, and they do commercials. Get in it. Find out what's going on and who's operating in it. Before you say I want to go to New York, wear out your city, wring it dry - wherever you are.