Dark matter continues to live up to its name. The most recent results from the European Space Agency's Planck spacecraft appear to cast serious doubt on previous claims of potential detections of the elusive dark matter particles.

For decades, astronomers have found what appears to be compelling evidence for the existence of matter that does not emit any light, but whose gravitational pull is responsible for holding cosmic structures together. In fact, dark matter far outweighs ordinary matter -- the stuff of which galaxies, stars, planets, and humans are made of -- in its contribution to the universe's energy budget. Yet, all attempts to actually detect the particles that constitute dark matter have so far failed (see a concise recent review).

There have been, however, a few promising signs in the form of an unexpected positron anomaly -- an excess in the number of the positively charged anti-particles of the electrons. The excess was detected by the Alpha Magnetic Spectrometer (AMS) -- an experiment on board the International Space Station. Last year, this experiment reported that in analyzing cosmic rays, contrary to expectations, the ratio of positrons to electrons increased with increasing energy of the particles. This finding was consistent with previous results from the European Payload for Antimatter Matter Exploration and Light-nuclei Astrophysics (PAMELA) and NASA's Fermi Gamma-ray Space Telescope. The suggestion was that the excess positrons could be created when dark matter particles and anti-particles annihilate each other. Not surprisingly, given the long history of non-detections, the AMS and Fermi results generated headlines such as "Dark Matter Possibly Found" and "Fermi data tantalize with new clues to dark matter."

Unfortunately, while confirming that about 26% of the cosmic energy budget appears to be in the form of dark matter, the new Planck results appear to negate the possibility that the AMS/Fermi/ PAMELA excess positrons have been produced by dark matter annihilations.
Basically, if annihilations of dark matter particles were to occur in the early universe, they would have produced energy that in turn would have increased the friction of ionized atoms. By measuring the temperature fluctuations and the polarization (the difference in the amplitude of vibrations in different directions) of the cosmic microwave background, the Planck team was looking for imprints of this increased ionization fraction. What they found instead was that if the probability for annihilation did not change with time, then the mass of the dark matter particles and the probability of annihilation that would have been required to explain the positron excess were excluded by Planck. 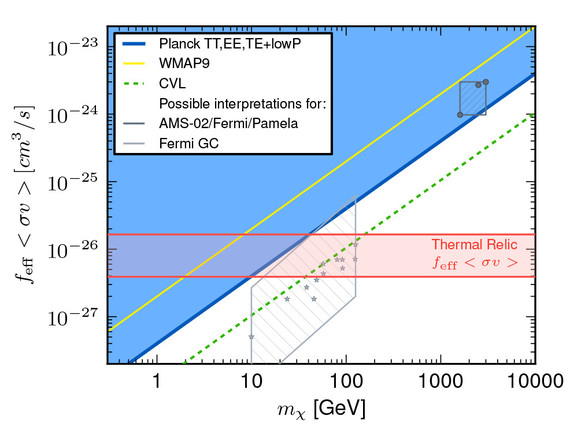 Figure 1. The probability for dark matter annihilation as a function of the mass of dark matter particles. The blue region shows the region excluded by Planck. The AMS/Fermi/PAMELA results fall in the excluded region. Credit: ESA - The Planck collaboration.