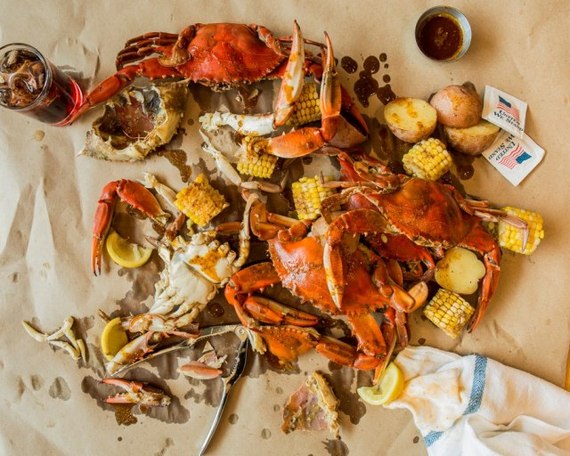 Piles of blue crabs, baptized with Miller Lite and anointed with Old Bay, with a grenadine-red cherry Coke on the side.

We've seen David Chang unwrap a square of dried instant ramen, sprinkle the concentrated "original" flavor on it, and take a big, crunchy bite. But that's not what we're devouring here today. We asked the master chef and restaurateur behind the sixteen restaurant Momofuku global empire what meal his 10-year-old self would really want to eat when he could have anything he wanted, something he'd want on a very special occasion. In this case, the special occasion is Momofuku Noodle Bar's 10-year anniversary.

It was a long way coming.

"Nobody thought that it was going to last 10 years," Chang told us. "I certainly didn't. I remember very clearly the broker being like, 'You should get the five-year option,' and I was like, 'Why the fuck would I want that? I'm not even going to be here, I'm not even going to be alive! Why would this restaurant even be here?' That's how I viewed things at the time. I didn't expect myself to be around in 10 years, let alone the restaurant, based on how insane things were at the time."

SEE MORE: Everything You Should Know About David Chang

In the Momofuku cookbook, Chang writes about simultaneously cooking and washing dishes, looking for employees on Craigslist who met his notoriously high standards, and convincing New Yorkers that noodles are God--the pressure and the stakes were so high that it was a near miracle when, after almost nine months, the accountant declared that the restaurant wasn't going to have to close. This was the greatest moment in Momofuku history, Chang told us. While his noodle bar is located in New York's East Village, the seeds of Momofuku all began in Northern Virginia, where he grew up.

When you really want to torture your siblings, there's no better way to use your precious TV-remote authority to turn on . . . midafternoon cooking shows on PBS.

"My family was late to get cable, so it wasn't that I wanted to watch cooking shows, there was nothing else to watch," Chang told us. "When it was my time to watch TV, or [be] in control of the station, I would put it to a station that nobody else would want to watch. I watched that guy, Jeff Smith, The Frugal Gourmet. But I think he was accused of being a pedophile [Editor's note: he was accused of sexual abuse in a lawsuit that he settled, brought against him by seven men, but he was never charged with a crime]. He was on PBS all the time when I was growing up. I watched him a lot. It sounds like I grew up in 1940."

SEE MORE: Which Celebrity Tequila Is Tops? We Taste-Tested Them So You Don't Have To

But it was the 80s, and Chang's life was uncomplicated--there weren't restaurants to oversee in Toronto, New York, and Australia: "I don't remember doing anything else other than playing golf and eating ramen noodles."

For celebrations, his family ate piles of blue crabs, baptized with Miller Lite and anointed with Old Bay. And that's what Chang made for us, with an old school, grenadine-red Cherry Coke on the side.

"One of my earliest memories, maybe when I was five to seven, I tried to cook crabs under the hot water in the bathroom sink. I was the person that would chase the other kids with crabs in my hands. That was me. I just remember trying to understand why they would turn red. I thought that the hot water from the bathroom sink would do it. It didn't work. And I only learned [the answer] last month," he laughed.

We asked if the fact that the crab was steamed in beer had any appeal to a young, rule-breaking-inclined young boy. "I never understood beer drinking until the appropriate age, like 16. It just fascinated me that you had this living creature, that was going to be edible, and that you could spend all this time trying to take the meat out of. It was almost more delicious just to lick your fingers than to eat the crab."

A lot of hard work, with a small payoff.

"Working really hard to get not that much . . . yes. That is really a metaphor for the restaurant industry."

For a limited time, August 18 through 24, Momofuku Noodle Bar will be celebrating the 10-year anniversary with a throwback menu of all of the restaurant's greatest hits. Get in line early, it's worth it. Check out the Momofuku shrimp and grits recipe here.

More from Vanity Fair:
Enjoy Mister Softee Like an Adult with These Rosé Pairings
What You Should Know About Danny Meyer
I Tried Living Like Blake Lively For a Week