A key theme at this World Economic Forum is inclusive growth. What does that really mean, and why is it important? It means that when developing countries and emerging markets experience growth, the poor people in those countries should participate and benefit. For example, India has 300 million people who are participating in the strong growth that is underway. Their incomes are growing; their wealth is increasing; and the environment they live in is improving. But, the lives of the remaining 700 million people in India are basically unchanged. Inclusive growth means the 700 million will also experience the benefits of growth versus being left out. 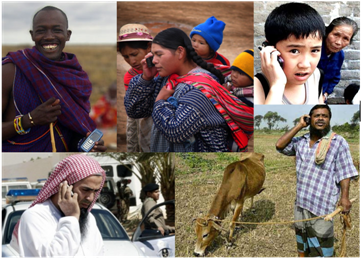 Most people reading this blog will have trouble visualizing a life without banking. A poor person in India or Africa can live more than eight hours or more from a bank branch, so keeping money in a bank is both inconvenient and impractical. As a result, they pay for everything in cash and are always paid for work or services in cash. This can make paying for essentials inconvenient and expensive. Just paying bills can involve travel and long queue times. If family members live or work in another place, sending or receiving money can be inconvenient and expensive, too. So people who have the greatest need, have the greatest cost.

Today, there are more than five billion mobile phones in the world, but only 1.6 billion bank accounts. This creates an unprecedented opportunity to use mobile access to bridge this gap by providing affordable financial services to people with a mobile phone who are currently underserved by traditional banking. This is my passion, this is my company's mission. Affordable financial services will empower their life and work.

Globally, the number of mobile banking users is expected to surge more than sixteenfold, to 894 million by 2015, according to Berg Insight, an industry research firm based in Stockholm. That's up from 55 million in 2009. So the majority of mobile banking customers in 2015 -- 78 percent, or 697 million people -- are in Asia, Africa, the Middle East and Latin America. Many of those 697 million people will have previously had little or no access to banking. My personal passion is to see these numbers higher in 2015 -- I'd like to see 400 million mobile bank accounts in India alone.

The desire and building blocks are in place. Getting it done will take hard work -- not rocket science, but complex execution is required. Scale will come from investment and collaboration. Those of us who have worked throughout the world on mobile banking have seen firsthand the importance of strong partnerships and other critical success factors.

This year at Davos, I was impressed with the new awareness of the potential power, business opportunity, and social mandate to make banking available to all mobile users. In many sessions the topic was inserted. Sessions focused on mobile financial services, were well-attended and the energy level was high. I'm sure that this interest level will translate into increased market momentum for solutions.

The only discouraging note came from an undercurrent of fragmentation -- too many players thinking they can do this as an independent provider, and not being part of a larger ecosystem. This will hamper growth and stunt value. It won't be visible in the first wave, but the ceiling will exist because fragmentation lowers value and creates market confusion. We saw this when computers were connected in groups, but not in one global network, when bank ATMs only supported one bank and not all banks. Adoption happened, but plateaus happened that could only be addressed by an open interoperable model. Closed, non-interoperable systems mean fewer participants; fewer users; fewer uses; and far less value.

Those who know me know I am a very passionate, optimistic person. So, it's no surprise that I leave Davos more optimistic than when I arrived. The awareness, investment, and momentum of mobile banking is building. The early part of most new implementations will still take longer than we want to scale, but growth after the tipping point will be much faster than expected. This makes the possibility of banking for all a real possibility for the world. Not so hard to believe, since we are so close to achieving universal communication with those 5 billion+ mobile phones.