Environmentalists are cheering after a meeting on the future of hydraulic fracturing, or fracking, for natural gas in the Northeast has been postponed.

The Delaware River Basin Commission, consisting of the governors of Pennsylvania, New Jersey, New York, Delaware and a representative from the Army Corp of Engineers, was set to meet this week and vote on regulations for natural gas drilling in regions near the Delaware River.

Three days ahead of the meeting, the DRBC commission's website announced the meeting was postponed with no rescheduled date listed. The announcement came after Delaware withdrew its support, threatening the draft regulations' chances of receiving a majority vote from the five-member commission.

Last week, Delaware Governor Jack Markell sent a letter to the commission's other members, announcing that he would not vote for the currently-proposed fracking regulations, joining New York in opposition.

Despite the postponement, a planned protest rally still took place Monday at the meeting site in Trenton, N.J. The Wall Street Journal reports that the hundreds of activists in attendance shared a celebratory mood. Yet their victory only means an extension of a fracking moratorium for the time being.

Filmmaker Josh Fox, the director of "Gasland" and one of the rally's organizers, told HuffPost, "I think that what we're dealing with here is obviously a very practical issue, 15.6 million people's water, but also something symbolic, because we're there with an enormous amount of strength on the ground."

An important concern for activists is fracking's history of groundwater contamination. Earlier this year, a peer-reviewed study from Duke University linked "natural gas drilling and hydraulic fracturing with a pattern of drinking water contamination so severe that some faucets can be lit on fire."

The Delaware River Basin provides drinking water to over 15 million Americans -- roughly five percent of the country's population. This includes the city of Philadelphia and about half of New York City's water supply.

While the DRBC claims its proposed regulations are intended to "protect the water resources of the Delaware River Basin," during natural gas extraction, others aren't so sure.

Actor Mark Ruffalo, who also attended Monday's rally, said in a statement, "I applaud Governor Markell for admitting that there is no science to justify opening up one of North America's important River Basins to industrialization and greed. Now the rest of the commission will hear from us, the people who speak for this beautiful river not for short term profits."

Fox said he was also pleased with the meeting's postponement and the show of support in Trenton on Monday.

According to Fox, an official count put an estimated 850 people at the gathering in front of the New Jersey Statehouse, with around 1,000 at the earlier rally at the site of the cancelled DRBC meeting. He said, "It was an amazing rally. I really think it was a turning point."

A federal advisory panel recently reported that if steps aren't taken to reduce the impact of fracking, "serious environmental consequences" could occur. The Associated Press reports that there has not been much progress on 20 recommendations given to the federal government and the oil and gas industry by the committee.

Supporters of natural gas drilling cite its abundance in the U.S. and its ability to create jobs in struggling areas of the Midwest and Northeast.

For more information about the campaign against natural gas drilling in the Delaware River Basin, visit the Save The Delaware website. To learn more about the disputed pros and cons of fracking, click here. 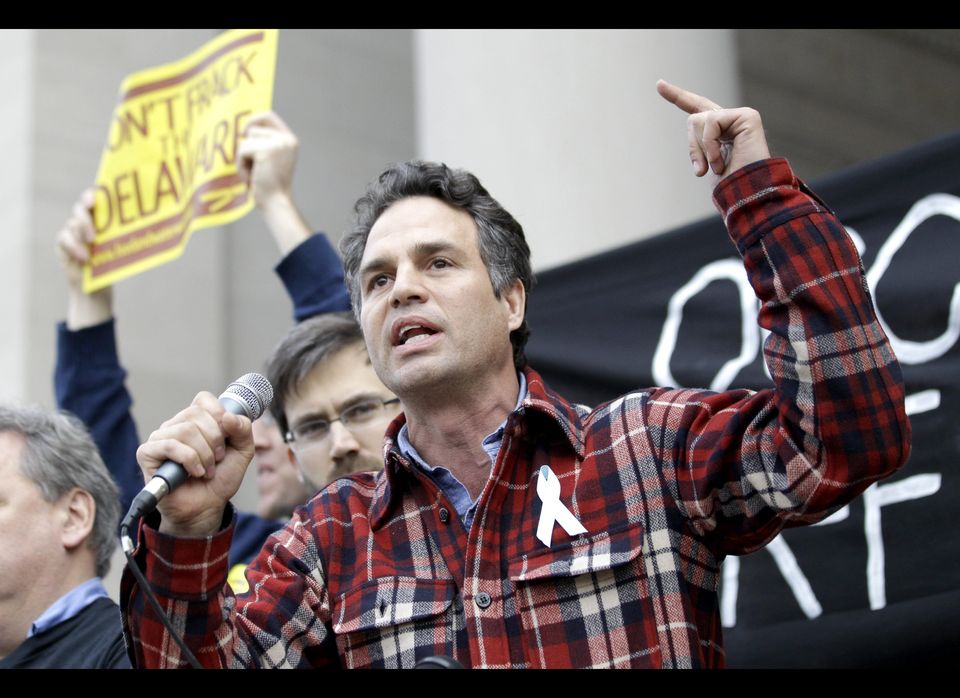 1 / 8
<em>From AP:</em> Actor Mark Ruffalo talks to a crowd gathered in Trenton, N.J., to voice their opposition against natural gas drilling in the Delaware River watershed during a rally at the state capitol, Monday, Nov. 21, 2011. The Delaware River Basin Commission had been set to vote on regulations regarding hydraulic fracturing, or fracking. However, the commission canceled the meeting after Delaware's governor said he would oppose the draft rules. New York is also opposed. (AP Photo/Julio Cortez)
AP