It was late. The snow was falling thick over Illinois in the heavy dark just before Christmas, 2012. I was staying in the apartment of my better half, an L-shaped box of a place and one of the less auspicious watering holes of our commuter marriage... Badly sealed windows barely kept out the gale, and I could hear it lashing the panes with vigor. My candles guttered. The lights flickered. In the burnt-wick smoke I swear even the shadows trembled.

But I read on.

You see, I had the distinct privilege of reading an advanced copy of Alex Grecian's The Black Country. In this grisly sequel to The Yard, we follow Inspector Walter Day and Sergeant Nevil Hammersmith to the British Midlands -- Victorian coal country -- in the grip of a winter storm. The black-flecked snow, the agonizing claustrophobia of a small, secretive town and the raw nerve of superstition combine to form a nightmarish backdrop for the detectives on a cold trail. Three people have disappeared, and their only leads are a shrunken eyeball and a haunting nursery rhyme:

Rawhead and Bloody Bones
Steals naughty children from their homes,
Takes them to his dirty den,
And they are never seen again.

The rhyme, grisly as the coal-smeared town, sinking slowing into the mines below, rings in your head as you read. It reminded me of others, no less evocative, such as the children's game of 'all fall down' that covers over a century of Black Plague outbreaks. It reminds us of surfaces and depths, and that we cannot generally trust what we see -- a lesson Day and Hammersmith must learn quickly if they are to leave the Black Country alive.

I returned to this novel recently, happily devouring it a second time in the sun-baked bliss of a summer vacation. But the light and warmth did not touch the pages of The Black Country, and I found myself on the edge of my seat for the second time. It isn't often that a mystery-thriller enthralls so completely on a second read, but as usual with Mr. Grecian, there is more to this tale than complex plotting. I am a historian of medicine and literature, and for me, the book brings to life the murky collision of two worlds in the Victorian era: traditional folklore and modern science. This intersection, captured so well by authors of the period, from Charles Dickens to Thomas Hardy, was fraught with complex questions about identity, authority, and belief. The problem facing Day, Hammersmith and the inimitable Dr. Bernard Kingsley is where to draw the line between friend and foe, superstition and science, disease and just deserts. Moreover, like The Yard, this novel once again brings death near and looming. In an age when religion was questioned, evolution and psychology burgeoning, and forensic science taking hold, the spectre of death had a new face. Monsters and mad-men were no longer "out there," they were "in here," in the borders of merry old England -- and sometimes more intimate still. The Black Country captures all of these nuances while preserving the fast-paced plotting and breathlessness of a first rate thriller.

Who is the ragged-faced man? What are the three remaining Price children hiding? And what is causing the strange affliction that spreads like a dismal shadow, over-taking even the sturdy Nevil? A displaced eye, a crumpled note, cryptic limericks and lost ribbons: like our detective heroes, we follow these trails into the white-blinding snow to its brilliant and unexpected conclusion. Whether you read the tale in the dark night of winter or the haze of a summer sun, be prepared for the chill. The days are dark in Black Country. 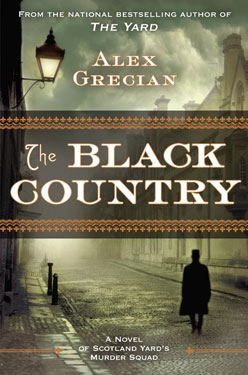