Ask people to name the world's oldest printed book and the common reply is Gutenberg's Bible. Few venture that the answer is a revered Buddhist text called the Diamond Sutra, printed in 868 A.D. Or that by the time Gutenberg got ink on his fingers nearly 600 years later -- and his revolutionary technology helped usher in the Enlightenment -- this copy of the Diamond Sutra had been hidden for several centuries in a sacred cave on the edge of the Gobi Desert and would remain there for several more.

Its discovery is the result of a series of accidents and its significance realized belatedly. The book unwittingly came to light when a Chinese monk clearing sand from a Buddhist meditation cave in 1900 noticed a crack in a wall. It suggested the outline of a doorway. Plastered over and painted, the entrance had been deliberately concealed.

The monk, Abbot Wang Yuanlu, broke in and discovered a small chamber, about nine feet square and full from floor to ceiling with scrolls. They had been hidden and perfectly preserved in the dark, dry grotto for 1,000 years. Although he didn't know it, among the nearly 60,000 scrolls was the Diamond Sutra of 868 A.D., a woodblock printed scroll, more than 16 feet long, complete and dated, with an instruction that it be given away for free.

Ironically, this enduring scroll, with its illustrated frontispiece depicting the Buddha teaching his disciples, is about impermanence. The Diamond Sutra, for centuries a revered and popular scripture, distils Buddhism's central belief: that all is change.

Unable to interest authorities in his find, Abbot Wang was ordered to seal the chamber. But rumor of the discovery had reached the nearby oasis when Hungarian-British explorer Aurel Stein arrived in 1907.

Stein had heard of the Caves of Thousand Buddhas, a network of 500 sacred painted caves hand-carved into a cliff just outside Dunhuang in remote Gansu province. They were a reason he embarked on a dangerous and secret expedition that saw him travel overland from India, through Pakistan and Afghanistan and into western China.

He wanted to follow the route by which Buddhism migrated from its birthplace in the Himalayan foothills and into China. It traveled along the Silk Road, the ancient trade route that conveyed not just goods but ideas. And none was more influential than Buddhism.

Stein wanted to follow the footsteps of his "patron saint," a seventh-century Buddhist monk named Xuanzang, who made an epic journey from China to India and back in search of Buddhist scrolls. Over centuries, his exploits have morphed into myth, including in the cult television series "Monkey." But Xuanzang penned a true account of his journey, one scholars still consult, and which Stein carried in his saddle bags.

When he went in search of the caves' guardian, Stein learned that Wang too revered the ancient Chinese pilgrim. Nonetheless, the abbot was reluctant to open the cave to Stein. But he did allow Stein a furtive look at a few scrolls overnight. Stein's Chinese translator realized that some were versions of Buddhist texts translated by the scholar-pilgrim Xuanzang.

It was an astonishing -- and convenient -- coincidence. Surely from beyond the grave Xuanzang wanted the cave opened to a disciple from distant India? Stein dropped the "quasi divine hint." Within hours, Stein stood within the cave in astonishment. "Heaped up in layers, but without any order, there appeared in the dim light of the priest's little lamp a solid mass of manuscript bundles rising to a height of nearly ten feet," he later wrote.

Most of the scrolls were Chinese Buddhists texts, but there were also Tibetan Buddhist documents. Others were Nestorian and Manichaean texts, and there was even a fragment in Hebrew. The range of documents suggest that this Silk Road oasis was once a great cultural and religious crossroads.

Stein had little idea of what was in the 5,000 scrolls he bought from Wang for £130. He had no time to examine the documents properly, nor did he understand Chinese. And Stein's Chinese translator knew little about Buddhism. The fact that the Diamond Sutra was somewhere among the many bundles was simply an accident.

Stein, born 150 years ago this year, took the Diamond Sutra and the other scrolls to India and on to London, where they are now in the British Library. But the significance of the Diamond Sutra of 868 A.D. took years to sink in. When the usually meticulous Stein first referred to it in his book about his expedition, published 1911, he recorded its date wrong. Stein's great rival, Frenchman Paul Pelliot, appears to have spotted its significance when he studied the scroll a few years later. The Diamond Sutra was displayed in the British Library at one stage near a Gutenberg Bible -- with the latter labeled as the world's earliest printed book.

The Diamond Sutra, now recognized as one of the world's great literary jewels, has recently undergone conservation. Too fragile to go on permanent display, it can be viewed online in greater detail than peering through a dark display case would allow. And there it can be viewed for free -- just as initially intended. 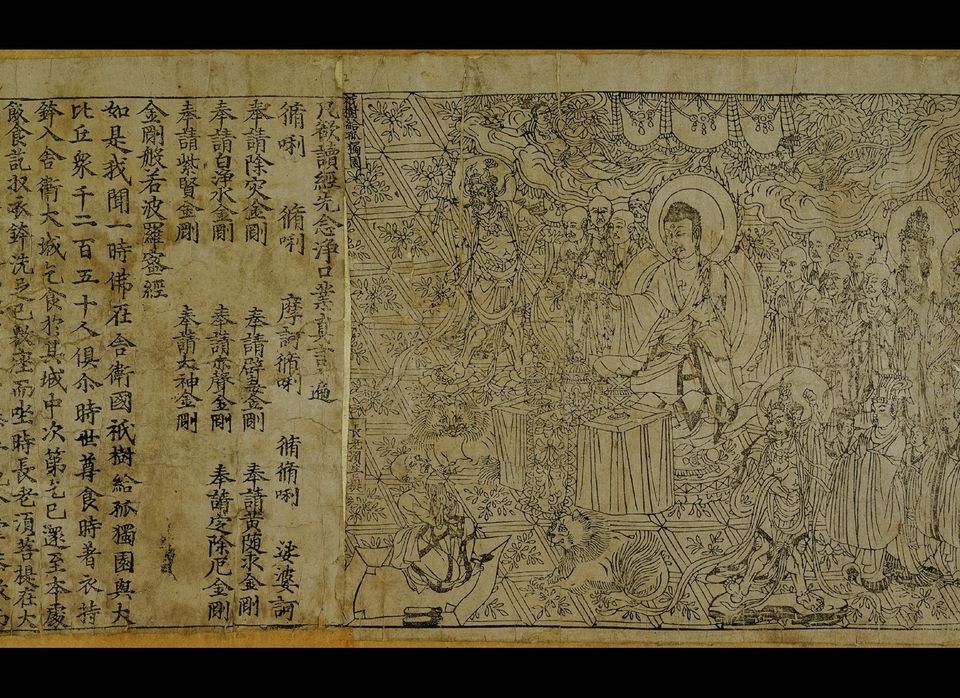