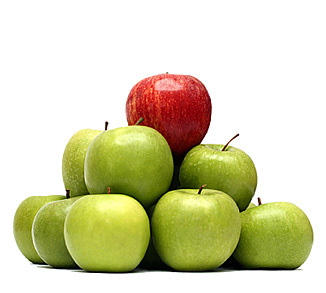 Being common often grants access to the largest pool of consumers. However, it also attracts the most competition. Consequently, a good strategy and one that I highly recommend, is that you remove yourself from the metaphorical middle and approach the uncommon. While this will lead to a smaller interested audience for you content, it will also be accompanied with less competition for viewership. It is quite possible, and in many cases easier, to successfully compete for a larger number of niche consumers than to compete for the same number of mainstream consumers. Furthermore, due to a comparatively small number of providers of niche content, the niche consumers are often more loyal than the mainstream consumers, who are motivated to disloyalty by being able to receive a similar product from what is often a comparatively large variety of providers. Never assume demographics are uniform. People are individuals and have differing interest and more importantly underlying reasons for those interest.

In 2014, Ray Ban initiated eight different campaigns in Asia, marketing eight styles of sunglasses to eight different customer archetypes. The company differentiated by creating eight distinct styles and by branding the different styles as being particularly desirable to different demographics. By doing this, they veered away from a one style fits all motto targeted at the masses and instead promoted each style's unique qualities in order to engage niche markets. Targeting niche markets is nothing new to Ray Ban, which launched the campaigned Never Hide in 2007 and which has since become synonymous with the brand.

According to a press release by Luxottica, the conglomerate that owns Ray Ban, "Real trendsetters, real opinion leaders, real individuals believe the most fashionable thing you can be is yourself; to be authentic, real, bold and stylish. So to reclaim its rightful place as the legitimate leader of sunglasses, Ray-Ban has to only speak and act like their maverick selves." Such branding is indicative of Ray Ban, which has managed to become one of Luxottica's most successful subsidiaries by identifying segments in their customer base and tailoring their messages accordingly.

Just as consumers are unique so also are your competitors. Do not be reductive in your analysis of your competitor's interest and reasoning. Just as importantly, do not discount the benefits your competition can provide you. The process of capitalizing on competitors' stances is referred to in negotiation as log rolling.

Log rolling benefits both parties involved by allowing each to offer concessions that are of comparatively minimal importance in exchange for concessions of comparatively greater significance. Even companies with virtually the exact same product can log roll to produce mutual benefits, since it is unlikely that they will have operated and be operating in symbiosis. An example of log rolling by a past negotiation instructor at University of Pennsylvania's Wharton Business School, Hengchen Dai, is of two companies that were staunch competitors in the acquisition of oranges. Both companies discovered through rigorous questioning that they could benefit each other by trading the portions of the oranges they didn't want for the portions of the oranges they desired. They managed to maximize their profits through log rolling the peel (desired for its oil) and the juicy inside (desired for eating.) Both businesses profited greatly from the deal.

Product differentiation within an industry, often leads to complimentary products which leads to opportunities for collaborative projects. The companies involved can leverage their specialty to compensate and trade services and or goods in exchange for something that would be more costly for them to produce on their own. As a result, all companies end up in a better position than they would be without each other.