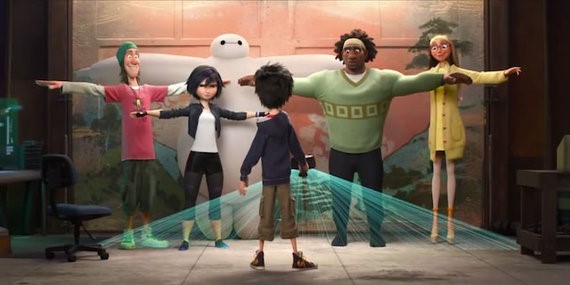 "The original characters aren't different from each other like this," whispered my 13-year-old daughter about 15 minutes into the film. I'll admit that I'm a bit green when it comes to the Marvel Comics book genre, and the only thing that I knew about Big Hero 6 prior to taking my kids to see it was that the lead character was biracial, and that Baymax the inflatable robot had a Marshmallow-meets-Michelin-Tire-Man look about him.

While the movie is an "origin" story illustrating how a young teen and his team come to acquire their superpowers, it also shows a progressive portrait of multiculturalism without calling it out or making it obvious - it simply is. The world of "San Fransoyko" is a deliberate blend of Eastern and Western cultures embodied within the lead character, Hiro Hamada - a 14-year-old Robotics prodigy who with a touch of mischief and great talent is also able to overcome loss with the aid of a robot, supportive friends and extended family.

This is the first time (another origin of sorts) that Disney Animation has presented a "biracial" central character within any of its feature length animated films. While to some this shouldn't seem like a big deal at all, to others - like my daughter, it is - because the power of film is that it represents a generation. If done well, a film will not only captivate audiences but it will effectively represent those audiences, providing them with an opportunity to see a bit of themselves up on the big screen too.

The progressive portrait of a racially blended family like the one making center-stage in Big Hero 6 didn't happen overnight. Prior to just 14 years ago (and also the same age of young Hiro) biracial and multiracial individuals were not allowed to assert their blended "two or more" racially ethnic backgrounds on the U.S. Census. Although multiracial people have been around for generations, our population was forced to "check only one box" and deny one racial group over the other.

Imagine now in 2014, making a child choose one parent over the other when enrolling into school, along with any other form used for the purposes of public record keeping. These "boxes" are then used to appropriate funding for educational resources and health initiatives targeting the support and development for this same child. Blended children and families remained on the outskirts of the dialogue on multiculturalism altogether until several years ago. We were often "seen" but not heard from or talked about because our very presence tested the boundaries of what "race" really meant and why it was such a defining characteristic in the first place.

Films like Big Hero 6 offer an opportunity for all children and families to identify with each another, and also learn about their cultural differences. For adults, the film allows us to see just how far we've progressed in the technological advancements of animation, while also providing an occasion to engage in ongoing dialogue with our children and families about the evolving world we live in.

The universal depth of the film is both rich on the surface and at its core. Younger and older generations alike will identify with 'Big Hero 6' for a variety of reasons well beyond the face of a distinctly intercultural superhero team (both on screen and behind the scenes). It's what my high school film teacher Mr. Hosney would call a 700-layer-cake experience, that with each new viewing of the film, another layer of insight - whether cultural, generational, or emotional -- is uncovered.

Since seeing the film, my daughter (also an aspiring animation artist herself), hasn't left her sketchpad alone, using it to recreate scenes from the film as she listens to songs from the 'Big Hero 6' soundtrack on her iPhone. As a parent these are golden moments. When a film has the power to do what Big Hero 6 can do on so many levels - it shouldn't only be watched, it should be celebrated.