Every Mother's Day, there's no lack of flowers, gifts, and various luxuries bestowed on women who have raised children. Many of us take special care to appreciate those who cared and provided for us when we were younger. We honor their sacrifice and express our gratitude. While we show our own mothers, grandmothers, aunts, and loved ones how much we cherish them, we must ask if we love black mothers enough.

A well-known African proverb reads, "It takes a village to raise a child." It also takes a village for Black women to have healthy pregnancies and deliver healthy babies. Like the Strong Families Mamas Day Campaign asserts, becoming a mother and parenting are not just individual undertakings. It is a journey that is influenced by a number of factors including our families, communities, and society -- our village. 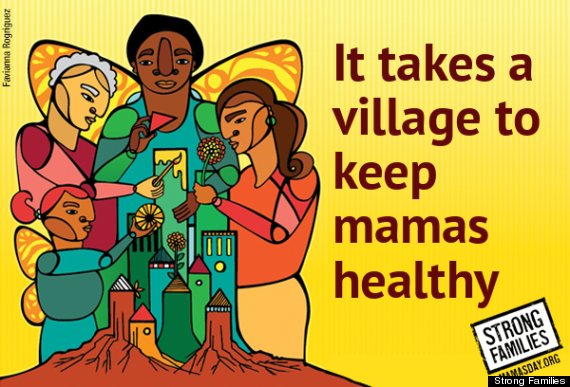 Pregnant women need to be cared for, cherished, and loved just as much as the women who raised us, but data show that this just isn't happening. An analysis of data from the Behavioral Risk Factor Surveillance System shows that White and Hispanic women report experiencing greater happiness during pregnancy, but that Black women do not. Moreover, Black women reported receiving less social and emotional support and attention from their families and community during pregnancy regardless of education, income, or age.

Pervasive racial inequities and resulting disparities in maternal and infant health outcomes are well-documented, but less is known about the relationship between social support during pregnancy and birth outcomes. Stress during pregnancy can be life-threatening and stress-related conditions such as high blood pressure can cause pre-term delivery. Researchers suggest that lack of social support and reproductive social capital -- described as the level of connectedness, networks, solidarity, and trust that exists in a community or society -- may contribute to higher levels of stress and thus, negative pregnancy outcomes. Strong social capital in a community could protect people from adverse health outcomes. In other words, it takes a village acting intentionally to care for pregnant women and protect their health.

For example, "being jerked around on a bus is difficult, hard, and very stressful," explains Loretta Jones, Founder and CEO of Healthy African American Families based in Los Angeles, California. A norm such as giving up your seat to a pregnant woman on public transportation could make a difference so it's surprising that some people won't give up their seat or practice other basic kind, loving behaviors.

Maybe it's that trope of the strong Black woman that makes people believe we don't need special care or attention when we are pregnant. People -- including Black women -- expect that we should and will handle whatever comes our way, keep it all together, and take care of everything ourselves -- pregnant or not. This Superwoman Syndrome is detrimental and potentially deadly.

Maybe it's the systematic stigmatization of Black motherhood that consciously and subconsciously impacts society's treatment of pregnant Black women. Not everyone thinks fondly of Black women building families on their own terms. A misplaced belief in the stereotype that Black mothers are "welfare queens" and burden public support systems have led some people to conduct illegal sterilization of Black women in California prisons and across the country. Similarly harmful initiatives -- like making women choose between long-acting contraception and time in prison -- have shown that our society doesn't trust Black women to make our own reproductive decisions and parent our own children, although we have raised generations of our own children and the children of our enslavers or employers.

That's just racism -- a pervasive problem I'm not sure will ever be solved. In the meantime Black women and their children are living and dying with the consequences of low and non-existent social support -- something that can be more readily remedied.

That's why Healthy African American Families conducted focus groups of pregnant women or women who had recently given birth to determine what else might make their pregnancies less stressful. What they came up with were 100 intentional acts of kindness that could be done at no cost and make pregnant women's lives a little easier. Loretta Jones remarks, "If you are in a grocery store and see a pregnant woman behind you, give her your place in line. This doesn't cost you anything but a few minutes of your time." Other acts on the list include babysitting her children, cooking meals, visiting her, being polite, and asking before you touch her belly. After a city-wide communications campaign -- complete with doorknockers providing education on pre-term delivery and bed rest and daily radio station announcements -- what they heard from the women in their survey was that it really made a difference in their lives.

That's great news because Black women across the country are suffering through despairingly high rates of pre-term delivery brought on by stress. In Memphis this April, Airiyanna Davis was born 10 weeks early weighing little over 2 pounds -- indicators that could impact her immediate survival and her health for years to come. Thanks to improvements in medical technology, Airiyanna's chances of survival are greater than ever, but infant mortality for Black women in the United States is on par with that of developing countries which lack sophisticated health care systems. It will take more than fancy machines and highly-qualified, skilled, and competent health care providers to remedy this injustice. That "more" could be something as simple as giving a pregnant woman a foot rub or wishing her a good pregnancy. "More" could be as complex as instituting policies regarding the treatment of pregnant women, such as requiring the existence of parking spaces closer to store or facility entrances and ensuring all pregnant women are eligible for programs like early Head Start and health care beyond their pregnancies. And "more" could be as dire as protecting pregnant Black women from brutal physical attacks. Black women and babies only deserve as much.

We must create communities and social contracts that consider, honor, respect, and care for Black women beyond one day each year. We must not doubt that small acts of kindness can create a more positive culture and enhance the experience of pregnancy and motherhood for Black women. Loving Black mothers is good for our families, our communities, and ultimately society. But this Mamas Day the question remains: do we love Black mothers enough?