A moving video of the extraordinary recovery -- and resilience -- of an abandoned dog who was left to die in a trash heap is reminding us this week of the healing power of love, friendship and second chances.

On Nov. 15, when Eldad Hagar first laid eyes on Miley, an abandoned dog living among piles of trash on the outskirts of Los Angeles, his heart broke.

"When I got there, I almost couldn't believe what I was seeing," Hagar, the co-founder of animal rescue organization Hope For Paws, told The Huffington Post of his first encounter with the pup. "It's almost as if this place was struck by a tsunami."

Miley, covered in mange and infections, was so lifeless and defeated that Hagar, who recorded the dog's rescue on camera, says she "didn't even have the energy" to run away from him as he approached her. 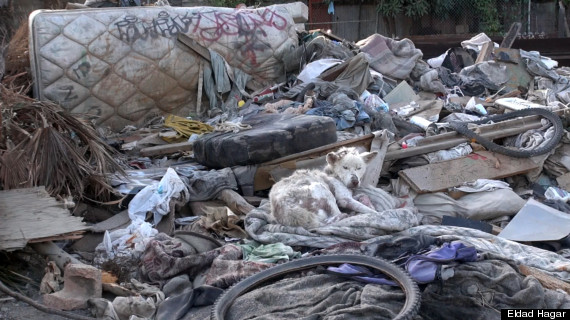 Hagar says he rushed to Miley's side after he heard about the pooch's plight from a local resident. The tipster told him that Miley had been living in the trash heap for at least a few months. It is believed that she was abandoned by her owners.

Though he knew that Miley wouldn't be in good shape, Hagar says he was still shocked when he finally made contact with her. Her physical deterioration was "definitely one of the worst cases" he'd ever seen, he said.

He knew he had to get Miley to a hospital right away.

Gaining the pup's trust was no easy feat, however. Hagar says he offered her food and sat with her in the pile of trash for an hour before she was finally ready to leave with him. Then he got her into his car to be brought to the vet.

"She was very lucky we rescued her when we did, because her condition would have continued to deteriorate until she would have died a miserable and painful death," Hagar said.

After examining Miley, veterinarian Dr. Lisa Youn discovered that the pooch wasn't just suffering from mange and bacterial infections, but parasites and malnutrition, as well.

"She was in so much pain," Hagar said.

Over the next two weeks, Miley got intensive medical care and was treated with antibiotics, medicine for parasites and frequent medicated baths. Slowly but surely, her spirits began to lift.

It wasn't, however, until Miley found a best friend that her recovery took a dramatic turn for the better.

Miley met Frankie the chihuahua after he was rescued from a sewer tunnel by Hagar and a friend. The tiny dog had almost drowned, Hagar said, because of a spell of heavy rain.

"He was so scared of everything," Hagar wrote of Frankie in the video. "Miley took Frankie under her wing and they quickly became really good friends." 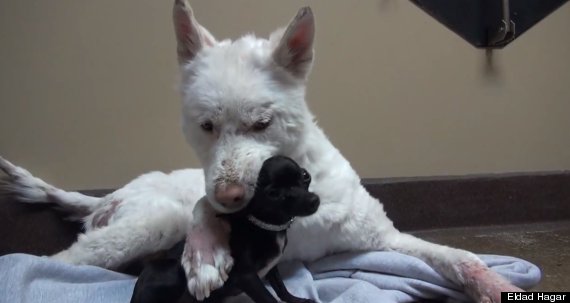 Miley and Frankie, who are wonderfully affectionate with each other, are said to be doing well.

The "worst part is behind [them]," Hagar told the HuffPost, adding that Miley should be "100 percent" in a few months.

Watch the adorable duo playing with each other in the video above. To find out more about the work that Hope For Paws does, visit the organization's website and Facebook page.