This week, GQ's Robert Draper broke the story that Donald Rumsfeld used cover sheets juxtaposing Bible quotes and war imagery for the top-secret intelligence briefings he hand-delivered to the White House. The "Crusades-like messaging" is one of many revelations in his exhaustive insiders account of the Rumsfeld era, "And He Shall be Judged." 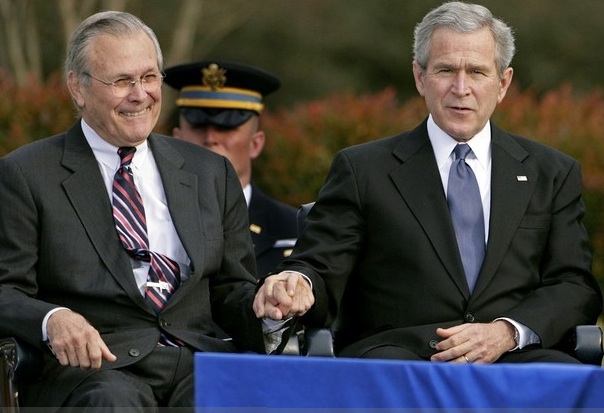 Piggybacking upon Draper's fine work, we here at the Huffington Post have done our own investigative reporting into Donald Rumsfeld's use of religious iconography to sell the Iraq War. We've uncovered exclusive classified documents--seen only by Rumsfeld, a handful of Pentagon officials and Vice President Dick Cheney--detailing a plan to utilize the music of Bush's beloved church. To curry favor and mollify the President, Rumsfeld changed the lyrics of his five favorite Christian songs.

FROM: Donald Rumsfeld, Secretary of Defense

RE: The Rummy Re-Mix of Religious Recordings

At 2 p.m. every afternoon, President George W. Bush works out, takes a nap, then arises for a short prayer, and a half hour of meditation to the following hymns. On my authority, the Pentagon choir will be re-recording the songs with a more positive pro-God message of freedom. Upon completion of the project, the recording studio will be broken down and shipped to Abu Gharib prison, where I am told we are getting slam-dunk confirmation on the Al Qadea-Saddam Hussein link. We'll definitely want that on tape.

Be advised, do not, I repeat DO NOT tell President Bush that the lyrics have been altered. He is a man of deep and abiding faith in both Jesus Christ and Operation Iraqi Freedom, so we're simply following the Almighty's example in helping the President attain a spiritual awakening through the power of God's love and music. 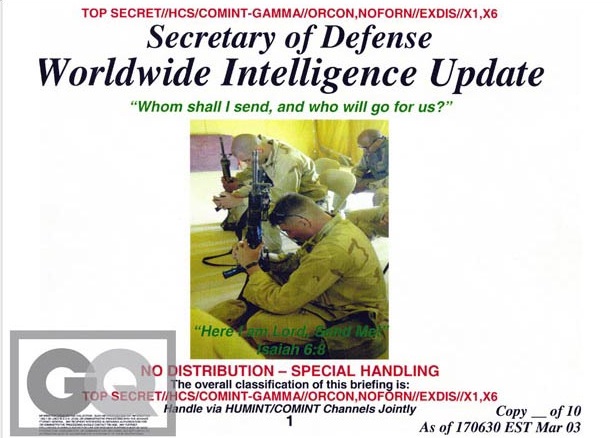 AMAZING GRACE:
Amazing Grace, how sweet the sound, Of the beating of a wretched I-raqi.
He'll start a-talkin', if he thinks he's drowned,
After which, we'll burn his eyes with lye, so he can't see.

T'was Grace that taught my heart to fear, both Sunnis and Shiites because they all look a-likes,
How precious did that Grace appear, to give me strength to take 'em all out with targeted air strikes.

Through the Iraq War dangers, toils and snares
I've questioned if our mission is righteous and true,
'Tis prayer that brought me peace thus far
By letting me know this is exactly what Big J.C. himself would do.

PASS IT ON:
It only takes a smoking gun to get a mushroom cloud going,
And soon all the innocent American citizens around, will melt as it's glowing
That's why you need to follow God's wrath, he wants us to bring the pain;
You'll spread bunker-busters throughout Iraq; passing them on until we kill Saddam Hussein.

What a wondrous time is spring when all the trees are blooming
The birds begin to sing, and the cluster bombs start their booming,
That's how it is with God's wrath, he's asked you, President Bush to lead the way;
To show Iraq the road to Christianity, or watch it choke on the holy fury of the U.S.A. 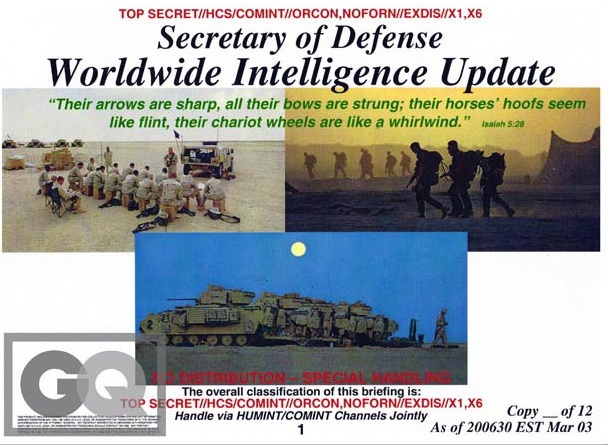 ON EAGLE'S WINGS:
Those who dwell in the shelter of Hussein,
Should be forced to make God's introduction,
Then Say to the Lord and W.: "My refuge,
Let me show you the weapons of mass destruction!"

The snare of the liberal cheese-eaters will never capture you,
And the enemy will bring you no fear:
You're on a Crusade from God,
As these pictures of American soldiers accompanied by Bible quotes makes clear.

You need not fear the terror of the night,
Nor the IEDs that explode by day;
Though thousands of civilians fall is plain to see,
There's little to no chance of an insurgency.

So the Iraqis will raise you up on eagle's wings,
Because if you commit to the Lord your plans will succeed,
So don't call it a Holy War,
Just know God blesses the good guys, even when civilians die and bleed. 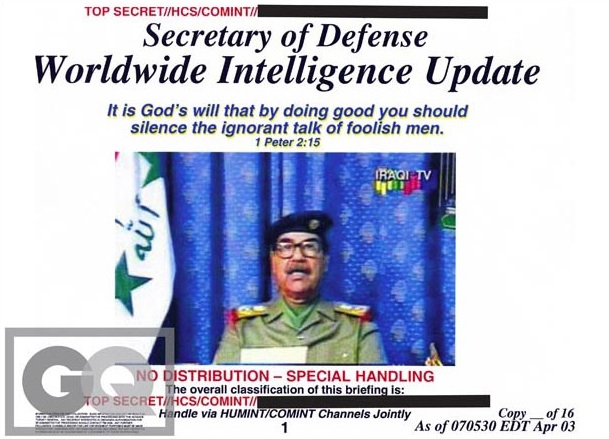 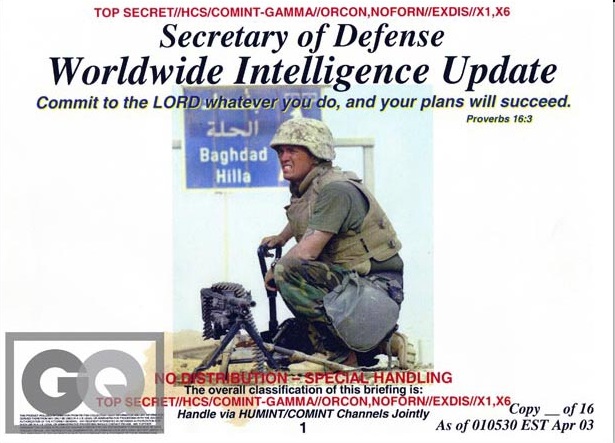 America, pray for me,
I know in my heart it's the work of the Lord
That's why this morning I knelt down and kissed the holy waterboard
If the Iraq War isn't right, then why do prayers make me so calm?
God spoke to me in a vision; he said, "Go ahead son, go get Saddam."

America, let me be honest with thee;
Them Islamuslims don't make much sense to me
They don't make the sign of the cross,
They don't celebrate Easter,
And who wants goat when they sit down at a family feaster?

Some say the Iraq War is wrong that invading a sovereign nation is chilling,
But if that's the case,
Then why do I have such a coalition of the willing?
It is only through war that we can attain any peace,
If I'm wrong tell me God and I'll cease.
Nothing. Hah. I knew you were with me Jesus; you're my kind of guy
Wash over me with your love dear Savior, or I die.

We're gonna burn this damn place down
Down to the ground