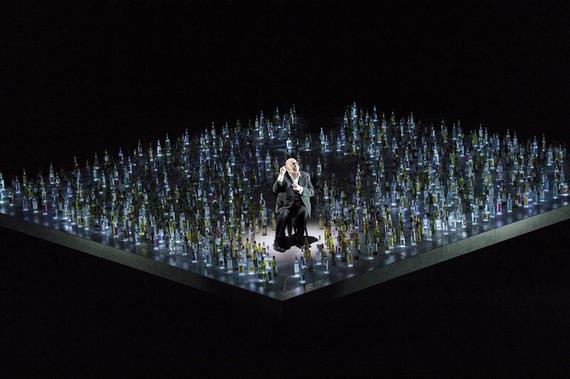 The pleasure of experiencing Les Contes d'Hoffmann through Komische Oper Berlin only begins with the highly expressionistic German characters and the national predilection for the doppelgänger. It extends into the magical realm by wunderkind artistic director Barry Kosky, who thrusts into full throttle the city's gender-bending cabaret aesthetic as a multilayered alchemical agent inviting the audiences into E.T.A. Hoffmann's tales of thwarted desire. Julian Offenbach's 1881 opera was based a trilogy of the German author's short stories and not quite finished before he died, giving rise to additions and a full five acts arriving with new interpretations ever since. 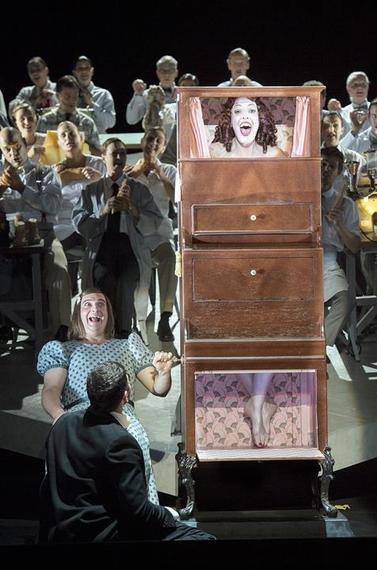 What Komische Oper lacks in elaborate sets is more than made up by Kosky's ingenious minimalist design of the fantastical dream of desire turned macabre nightmare through the imposition of the shadow. It is through physical form that Hoffmann's Promethean vision of the passage through the opposites is magically manifested into vertical/horizontal motion. The shifting geometry of a dual stage sporting a shape-shifting suspended platform--from a diamond into ascending (masculine) and descending (feminine) triangles--serves to stabilize and destabilize the dream narrative, and invite audience participation in a wild ride through the polarities of love and hate. 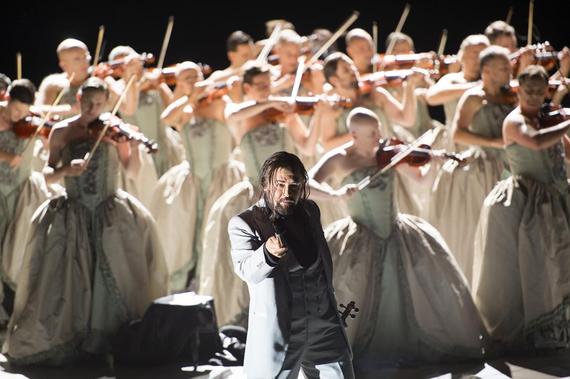 The Hoffmann (Uwe Schonbeck) we meet in the diamond surrounded by empty bottles has a doppelgänger in a younger self (Dominick Koninger and Alexander Lewis), prompting the author to cringe on the fringes while the Other plunges into his dramatic tales. Their subject of unobtainable love is symbolized by a single bottle ascending from the stage to the sound of Stella's singing as Donna Anna in Mozart's Don Giovanni. This longing prompts the gender-bending Muse (Karolina Gumos) to push him into a Giovanni-like encounter with his shadow as he recounts his three loves: a naughty girl who turns out to be a puppet, a young singer of astounding talent who sings herself to death and the seductive courtesan Giulietta, who steals his mirror image. 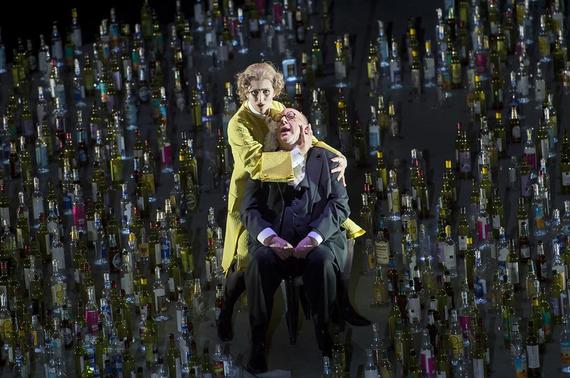 With the forewarning of the ultimate doppelgänger confrontation through a male choir grotesquely attired in the opera singer's blue gown, the three parts played by one soprano is the giveaway. The three Hoffmanns come to understand what the gender-bending Muse had been instructing all along and the audience knows through the repetition of the exquisitely animated soprano Nicole Chevalier as the three woman he loved: they are all versions of his beloved Stella, whose letter inviting a meeting with the author is cunningly intercepted by the evil Lindorf (Jens Larsen), the baritone who plays Dr. Miracle and the other figures acting as the Hoffmann nemesis. 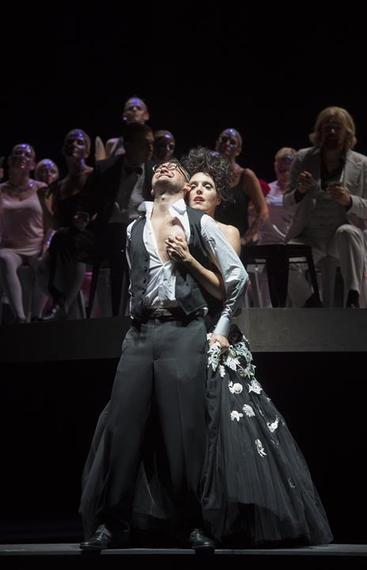 The performances are superb interpretations of the alchemically-charged Jules Barbier libretto, with Hoffmann and his Beloved extending the doppelgänge German vampire literature through the mirroring opposites: the erotically-charged mutual embrace together with the individual Ouroboric self-devouring inside a standing coffin. While the coffin doubles as the container of the alchemical transformation and Hoffmann's tomb, the sexual climax is the logical conclusion to the score: Chevalier's orgiastic singing rite sums up the key to the timeless universality of Hoffmann's feverish prose as the struggle for a simultaneous ascent and descent of the musical scale into the middle ground of integration.

The Kosky hyper modernistic interpretation of Jacques Offenbach's Les Contes d'Hoffmann is undeniably clear: dare to enter the embrace of Eros and live to write tales about it.