Consider this ad running today at the top of the Drudge Report: 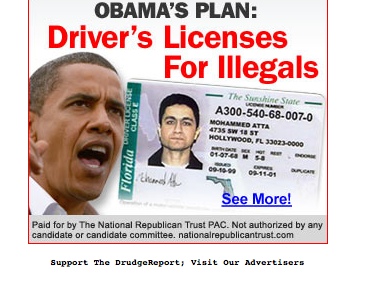 Really, Drudge? You accepted an ad running a picture of Obama beside the picture and name of a 9/11 hijacker?

In fear of a filibuster-proof Democratic supermajority on November 4th (apparently within reach, but I'll believe it when I see it), the right wing has gone running to the basement to dig out every knife, whip, and cudgel it can find. Mad-eyed Minnesota Congresswoman Michelle Bachmann calls for a witch hunt in Congress and suggests Saul Alinsky was an anti-American radical. McCain pays for hateful phone calls implying that Obama is involved with terrorism. Armies of the gleefully hateful flock to McCain/Palin rallies, inspired to lung up all the bile that's been curdling inside them--

Vitriol of this nature isn't coming from the left. There's no tit-for-tat here. One side of this fight is without class, without integrity, without honor. If these people retain control of the government--it hardly bears thinking about.