Is it safe to bogart that e-cig or even be in the same room with an e-cig bogarter?

OK, in this post we're going to clue you in on some of the potential issues with electronic cigarettes or e-cigs, as they're diminutively known. But before we do, we need to get one thing straight: Smoking cigarettes kills. Per the Centers for Disease Control and Prevention, smoking "is the leading cause of preventable death in the United States, accounting for more than 480,000 deaths, or one of every five deaths, each year."

Add to that the more than 16 million Americans who suffer from a smoking-related disease, and it's fairly clear anything that lowers the rate of cigarette smoking is going to improve our overall health. 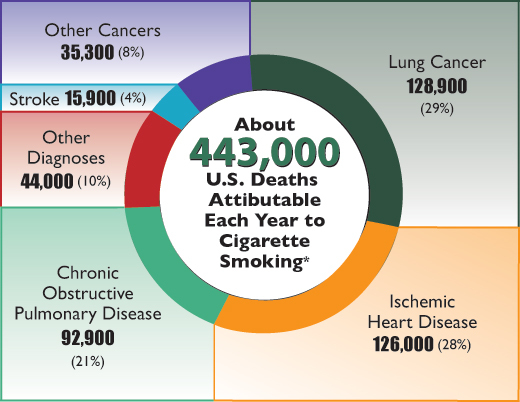 Smoking cigarettes is the leading cause of preventable death in the United States. The latest statistics from the Centers for Disease Control show the number of U.S. deaths attributable to cigarette smoking has climbed to 480,000. (Source: cdc.gov, 2000-2004)

The numbers are somewhat encouraging. While more than 40 percent of Americans smoked in 1965, only about 18 percent did in 2012. However, given that our population grew over that time, the net drop in American smokers -- 1965's 50 million smokers versus 2012's 42 million -- is only 8 million.

That drop in the rate of smoking probably didn't just happen. The government and a host of nonprofits have waged a long and hard campaign against smoking: ever-increasing taxes, a ban on broadcast advertising, and anti-smoking ad campaigns that promote a healthy lifestyle and warn of the health risks of smoking. (California appears to be leading the pack in this fight.) And ever since 1966, Americans have not been able to purchase a pack of cigarettes free of a stern warning about the hazards of smoking. 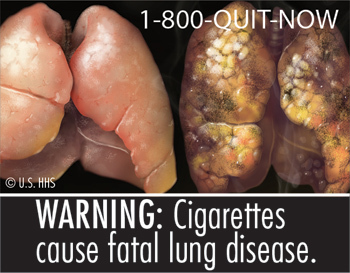 For decades the government and many nonprofits have mounted anti-smoking campaigns. Some of this work seems to have paid off. (FDA)

Then there's the wide assortment of products to help smokers kick the habit -- everything from patches and gum to prescription drugs, lozenges and lollipops. And more recently e-cigarettes.

The Newest and Coolest: 'Vaping'

Although they were patented back in the 1960s, electronic cigarettes didn't really come onto the scene until the past decade, appearing first in China in 2004 and spreading to other areas including Europe in 2006 and then the United States the following year. (See infographic on the history of e-cigarettes.)

These cigarette lookalikes basically consist of a cartridge, a battery and an LED light. When turned on, the e-cig heats up the liquid that is housed in the cartridge; this produces an aerosol mist or vapor, which the "smoker" inhales or "vapes," an alternate term that denotes the lack of combustion. The ingredients of the liquid vary, but generally include nicotine (though some are nicotine free), chemicals to vaporize the nicotine (like propylene glycol and vegetable glycerin), additives and flavoring.

Since they are tobacco free, e-cigs are currently unregulated in the United States but that may change. Already cities like Boston, Chicago, New York, and most recently Los Angeles have restricted their use. And Utah, New Jersey and North Dakota have banned their use wherever smoking is prohibited. Other states and localities including Minnesota and Oregon are considering restrictions as well.

It is my impression that there's some confusion in how e-cigs are being marketed. In some cases they are being touted as a nicotine replacement product that smokers can use to eventually quit smoking altogether or (more likely to me) a healthier way to get your nicotine. 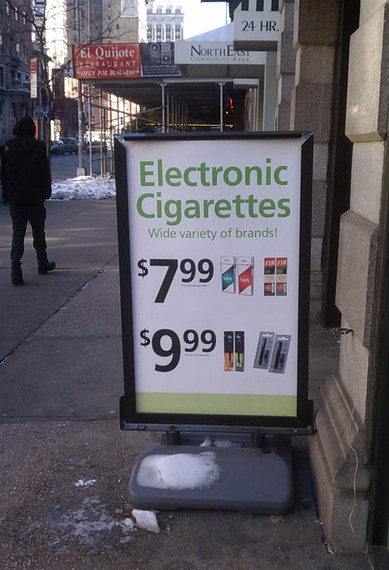 E-cigarettes are taking off as an alternative to conventional cigarettes. But when it comes to health, are they safe or do they blow?

And I guess if you "got to" smoke (whatever that means) I suppose e-cigs are probably a lot less unhealthy than good, old-fashioned cigarettes.

Given the long and sorry list of harmful and toxic chemicals in cigarettes, vaping is almost certainly less dangerous to your health.

The Potential Hazards of Vaping

But don't be fooled into thinking that e-cigs are without risks or that you should now be able to vape to your heart's content. Or that they’re plain healthy.

First of all, nicotine is a drug and a powerfully habit-forming one at that, and a 2013 study suggests that even inhaling the drug via either conventional cigarettes or e-cigs may contribute to heart disease.

Also there is evidence that e-cigs deliver some toxic stuff of their own such as formaldehyde (a known carcinogen), nitrosamines (linked to cancer) and lead (a neurotoxin). Though the toxicant levels of e-cigs may be "9-450 times lower than in cigarette smoke," as this study suggests, levels of formaldehyde and metals have been found to be comparable to or higher than those found in conventional cigarettes.* Silicate particles, which are a cause of lung disease, have also been found in e-cigarette vapors.

A number of e-cig enthusiasts I have spoken to believe that the ban on smoking cigarettes in public places should not apply to e-cigs. And some are acting on that belief. I've even seen a woman confidently doing her e-cig thing on the subway in New York. Another in a restaurant.

And why not? Electronic cigarettes don't burn and so there is no smoke. And no smoke means no second-hand smoke. And no second-hand smoke means no health worries for the non-e-cig public who happen to be in the vicinity. Sounds reasonable and what a boon for nicotine addicts. Relegated, lo all these years, to standing outside in the freezing cold or blistering heat to get their fix and unable to inhale while in flight, now e-cig users can reenter conventional society.

But is there really no second-hand "smoke"?

Don't be so sure. A small study by Wolfgang Schober of the Bavarian Health and Food Safety Authority and colleagues published in the International Journal of Hygiene and Environmental Health in December found that vaping worsened indoor air quality, specifically by increasing the concentration of nicotine, particulate matter, PAHs and aluminum -- compounds that have been linked to lung and cardiovascular disease and cancer among other health effects.

The upshot? Probably won't be long before the nicotine-inhaling e-cig users of the world find themselves legislated back out into the cold to hang with their conventional nicotine-smoking addicts.

* Comparable levels of some metals have been reported for FDA-approved nicotine inhalers as well. Depending upon your view of FDA regulations, you could take this as an "all clear" on metals and e-cigs. One difference between inhalers and e-cigs that may impact exposure is that the vapors from FDA inhalers are absorbed in the mouth rather than the lungs like e-cigs.