A 2- to 3-year-old child from a Romano-Christian-period cemetery in Dakhleh Oasis, Egypt, shows evidence of physical child abuse, archaeologists have found. The child, who lived around 2,000 years ago, represents the earliest documented case of child abuse in the archaeological record, and the first case ever found in Egypt, researchers say.

The Dakhleh Oasis is one of seven oases in Egypt's Western Desert. The site has seen continuous human occupation since the Neolithic period, making it the focus of several archaeological investigations, said lead researcher Sandra Wheeler, a bioarchaeologist at the University of Central Florida. Moreover, the cemeteries in the oasis allow scientists to take a unique look at the beginnings of Christianity in Egypt.

Archaeologists discovered the remains of a toddler in Romano-Christian-period cemetery in Dakhleh Oasis, Egypt, who showed evidence of child abuse. Here, mud bricks for two tomb structures in the cemetery. In the foreground, several excavated graves can be seen.

In particular, the so-called Kellis 2 cemetery, which is located in the Dakhleh Oasis town of Kellis (southwest of Cairo), reflects Christian mortuary practices. For example, "instead of having children in different places, everyone is put in one place, which is an unusual practice at this time," Wheeler told LiveScience. Dating methods using radioactive carbon from skeletons suggest the cemetery was used between A.D. 50 and A.D. 450.

When the researchers came across the abused toddler — labeled "Burial 519" — in Kellis 2, nothing seemed out of the ordinary at first. But when Wheeler's colleague Tosha Duprasbegan brushing the sand away, she noticed prominent fractures on the child's arms. [See Photos of Kellis 2 Cemetery & Skeleton]

"She thought, 'Whoa, this was weird,' and then she found another fracture on the collarbone," Wheeler said. "We have some other kids that show evidence of skeletal trauma, but this is the only one that had these really extreme fracture patterns." 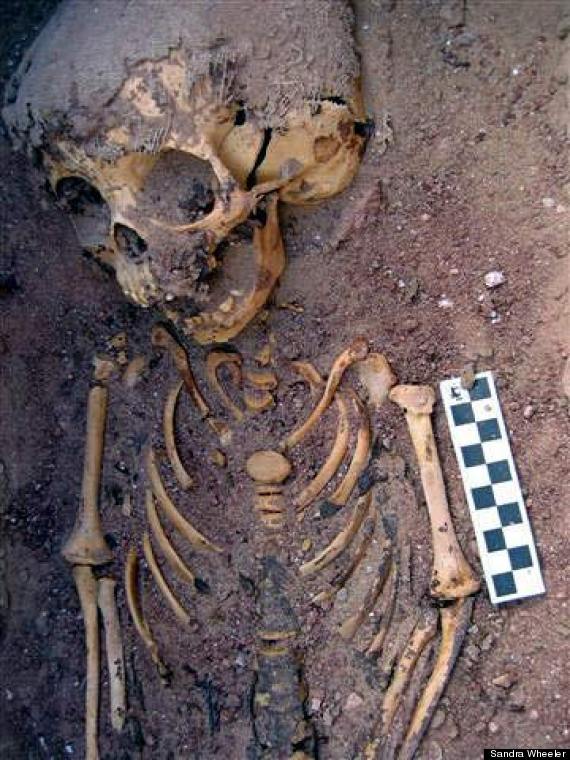 Close-up of upper body of burial 519, the 2,000-year-old remains of the abused toddler in Egypt.

The researchers decided to conduct a series of tests on Burial 519, including X-ray work, histology (microscopic study of tissues) and isotopic analyses, which pinpoint metabolic changes that show when the body tried to repair itself. They found a number of bone fractures throughout the body, on places like the humerus (forearm), ribs, pelvis and back.

Whereas no particular fracture is diagnostic of child abuse, the pattern of trauma suggests it occurred. Additionally, the injuries were all in different stages of healing, which further signifies repeated nonaccidental trauma.

One of the more interesting fractures was located on the child's upper arms, in the same spot on each arm, Wheeler said. The fractures were complete, broken all the way through the bone — given that children are more flexible than adults, a complete break like that would have taken a lot of force.

After comparing the injury with the clinical literature, the researchers deduced that someone grabbed the child's arms and used them as handles to shake the child violently. Other fractures were also likely caused by shaking, but some injuries, including those on the ribs and vertebrae, probably came from direct blows.

The archaeologists aren't sure what ultimately killed the toddler. "It could be that last fracture, which is the clavicle fracture," Wheeler said, referring to the collarbone. "Maybe it wasn't a survivable event."

Child abuse in the archaeological record is rare. One possible reason, Wheeler said, is that archaeologists didn't really pay much attention to child remains until about 20 years ago, believing that children couldn't tell them much about the past.

A few cases of possible child abuse have since come out of France, Peru and the United Kingdom, all of which date back to medieval times or later. "Certainly, our case has the best context in terms of the archaeology and skeletal analysis," Wheeler said.

Of the 158 juveniles excavated from the Kellis 2 cemetery, Burial 519 is the only one showing signs of repeated nonaccidental trauma, suggesting child abuse wasn't something that occurred throughout the community. The uniqueness of the case supports the general belief that children were a valued part of ancient Egyptian society.

By contrast, though Romans loved their kids immensely, they believed children were born soft and weak, so it was the parents' duty to mold them into adults. They often engaged in such practices as corporal punishment, immobilizing newborn infants on wooden planks to ensure proper growth and routinely bathing the young in cold water as to not soften them with the feel of warm water.

"We know that the ancient Egyptians really revered children," Wheeler said. "But we don't know how much Roman ideas filtered into Egyptian society," she added, suggesting that the unique child abuse case may have been the result of Roman influence.

The research will be published in an upcoming issue of the International Journal of Paleopathology.