By Derick Snyder and Daniel Flynn

MONROVIA/DAKAR, Aug 6 (Reuters) - Health workers in West Africa appealed on Wednesday for urgent help in controlling the world's worst Ebola outbreak as the death toll climbed to 932 and Liberia shut a major hospital where several staff were infected, including a Spanish priest.

The World Health Organization (WHO) said it would ask medical ethics experts to explore the emergency use of experimental treatments to tackle the highly contagious disease after a trial drug was given to two U.S. charity workers infected in Liberia.

With West Africa's rudimentary healthcare systems swamped, 45 new deaths from Ebola were reported in the three days to Aug. 4, the WHO said. Liberia and Sierra Leone have deployed troops in the worst-hit areas in their remote border region to try to stem the spread of the virus, for which there is no known cure.

WHO experts began a two-day crisis meeting in Geneva to discuss whether the epidemic constitutes a "Public Health Emergency of International Concern" and to consider steps to help overstretched emergency organizations.

"This outbreak is unprecedented and out of control," said Walter Lorenzi, head of medical charity Medecins Sans Frontieres (MSF) in Sierra Leone. "We have a desperate need for other actors on the ground - not in offices or in meetings - but with their rubber gloves on, in the field."

International alarm at the diffusion of the virus increased when a U.S. citizen died in Nigeria last month after flying there from Liberia. Authorities said on Wednesday that a Nigerian nurse who had treated Patrick Sawyer had also died of Ebola, and five other people were being treated in an isolation ward in Lagos, Africa's largest city.

With doctors on strike, Lagos health commissioner Jide Idris said volunteers were urgently needed to track 70 people who came into contact with Sawyer. Only 27 have so far been traced.

"We have a national emergency, indeed the world is at risk," Nigeria's Health Minister Onyebuchi Chukwu said after a weekly cabinet meeting in Abuja. "Nobody is immune. The experience in Nigeria has alerted the world that it takes just one individual to travel by air to a place to begin an outbreak."

U.S. health regulators on Wednesday authorized an Ebola diagnostic test developed by the Pentagon for use abroad on military personnel, aid workers and emergency responders in laboratories designated to help contain the outbreak.

The test is designed for use on people who have symptoms of Ebola infection, are at risk or may have been exposed to the virus. It can take as long as 21 days for symptoms to appear after infection.

In Saudi Arabia, a man suspected of contracting Ebola during a recent business trip to Sierra Leone also died early on Wednesday in Jeddah, the Health Ministry said. Saudi Arabia has already suspended pilgrimage visas from West African countries, which could prevent those hoping to visit Mecca for the haj in early October.

Liberia, where the death toll is rising fastest, is struggling to cope. Many residents are panicking, in some cases casting out bodies onto the streets of Monrovia to avoid quarantine measures, officials said.

Beneath heavy rain, ambulance sirens wailed through the otherwise quiet streets of Monrovia on Wednesday as residents heeded a government request to stay at home for three days of fasting and prayers.

"Everyone is afraid of Ebola. You cannot tell who has Ebola or not. Ebola is not like a cut mark that you can see and run," said Sarah Wehyee as she stocked up on food at the local market in Paynesville, an eastern suburb of Monrovia.

St. Joseph's Catholic hospital was shut down after the Cameroonian hospital director died from Ebola, authorities said. Six staff subsequently tested positive for the disease, including two nuns and 75-year-old Spanish priest Miguel Pajares, who is due to be repatriated by a special medical aircraft on Wednesday.

Spain's health ministry denied that one of the nuns, born in Equatorial Guinea but holding Spanish nationality, had tested positive for Ebola. The other nun is Congolese.

"We hope they can evacuate us. It would be marvelous, because we know that, if they take us to Spain, at least we will be in good hands," Pajares told CNN in Spanish this week.

More than 60 healthcare workers have died fighting the virus, a heavy blow in a region where doctors are already in chronically short supply. Two U.S. health workers from the Christian medical charity Samaritan's Purse and missionary group SIM USA caught the virus in Monrovia and are receiving treatment in an Atlanta hospital.

The two saw their conditions improve by varying degrees in Liberia after they received an experimental drug, a representative for the charity said. Three of the world's leading Ebola specialists urged the WHO to offer people in West Africa the chance to take experimental drugs.

A spokesman for the Liberian government said it would be willing to allow in-country clinical trials.

Highly contagious, Ebola kills more than half of the people who contract it. Victims suffer from fever, vomiting, diarrhea and internal and external bleeding.

Many hospitals and clinics have been forced to close across Liberia, often because health workers are afraid of contracting the virus or because of abuse by locals who think the disease is a government conspiracy.

In an effort to control the disease's spread, Liberia has deployed the army to implement controls and isolate severely affected communities, an operation code-named "White Shield".

The information ministry said on Wednesday that soldiers were being deployed to the rural counties of Lofa, Bong, Cape Mount and Bomi to set up checkpoints and implement tracing measures on residents suspected of contact with victims.

Neighboring Sierra Leone said it has implemented new restrictions at the airport and that it was asking passengers to take a temperature test. In the east, soldiers set up roadblocks to limit access to affected areas, MSF's Lorenzi said.

Randgold Resources, which mines gold in neighboring Mali and Ivory Coast, advised its workers not to travel to the affected countries. 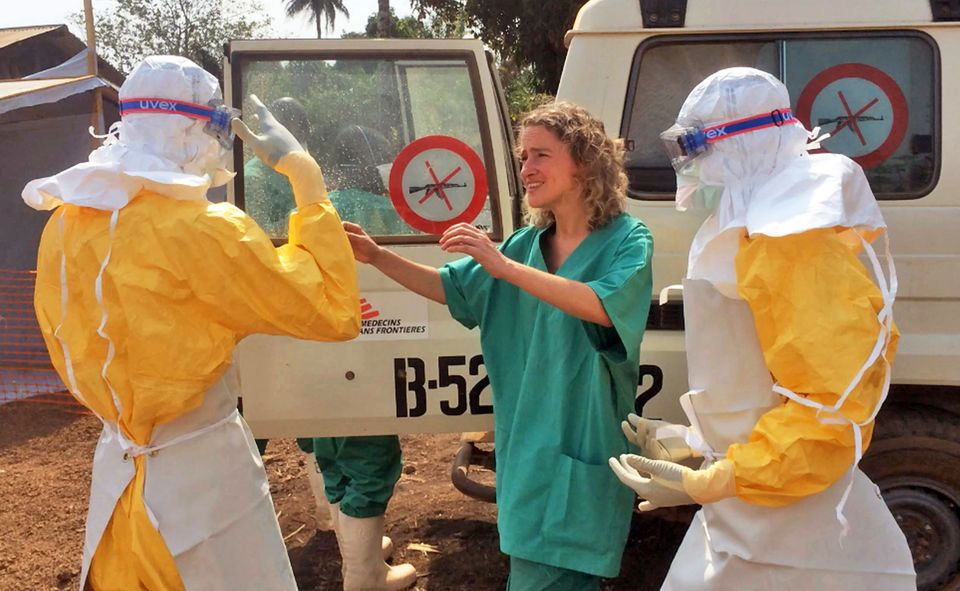