The recession's impact on American education has not yet dissipated, as more than half of states are slashing their education budgets this year.

According to a new analysis from the Center on Budget and Policy Priorities, 26 states will spend less per pupil in fiscal year 2013 than the year before, and 35 are still spending at levels lower than before the recession, after adjusting for inflation. 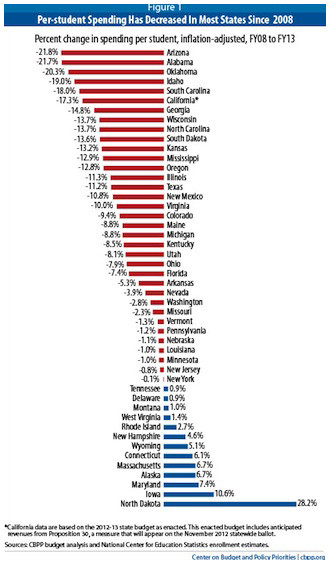 The cuts, stemming from the recession in 2007, were relied on heavily rather than a combination of cuts and revenue increases. While states balanced their budgets and saw lessened impact through $100 billion in federal stimulus money for education, the funding dried up at the end of the 2011 fiscal year.

Several states are increasing funds this year over last year, but are -- for the most part -- not enough to restore the cutbacks from previous years. Florida, for example, is allotting an additional $273 per student this year, compared with its previous four years of $569 per-student cuts.

North Dakota is an outlier, jumping spending by 28.2 percent, but largely attributable to the state's oil-fueled economic boom. Similar reasoning stands for lessened financial impact in states like Montana and Wyoming.

The report's authors note that the cuts to education has yielded a downward spiral effect, as hundreds of thousands of educators have lost their jobs. They also force the termination of school programs and services, which hinder education reform efforts that are often disproportionately focused on low-income communities, furthering the education and achievement gap among students of varying economic backgrounds. 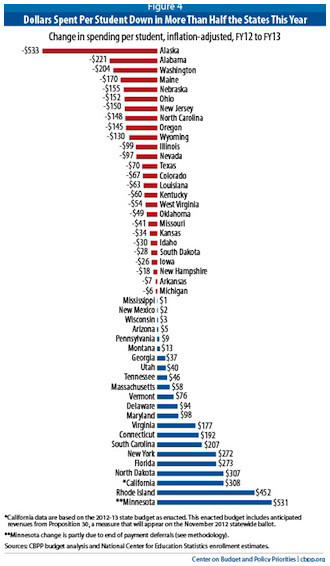 According to a report last fall by the Campaign for America's Future, evidence suggests that cuts to education funding are leading to cutbacks from early childhood education programs, increases in class sizes and termination of art, music, physical education and other elective subjects. Special programs are also being cut as a result -- including those that assist students with special needs as well as Advanced Placement courses, extracurricular activities and special academic programs for science, foreign language and technology.

The report also notes that districts are pressured to transfer funds to areas beyond traditional public education -- to systems like charter schools. Drawing on case studies among five states, the report recommends that states across the country provide regulatory relief to districts as well as reinstate adequate funding to schools.

This year's CBPP report shows slight improvement from last year, when 37 states were found to have trimmed education funding from the year before.

The authors suggested suggest that states consider other measures to raise revenue and calls on the federal government to increase educational support like that of the American Jobs Act that aim to hire and retain teachers.