(Truth is one; sages call it by various names.)

This morning, I have woken up in the beautiful apartment of close friends in Bandra, a largely Christian neighborhood in Bombay. I've been traveling in India with the purpose of meeting people of Hindu faith who are doing work on behalf of the needy and disadvantaged in India. This trip to India came about because I and my colleagues in Sadhana are grappling with how, as progressive Hindus, we can concretely work on rejecting and dismantling caste. Thanks to a learned and extremely open-minded Swamiji, Swami Bodhananda, I have visited two Dalit villages that have been embraced by progressive Hindu families who are quietly working for social reforms and social justice in very concrete ways. I hope to write soon about both of these villages, one near Varanasi and one near Nainital.

But first, I want to write about something that happened last night when my Bandra friends took me to the yoga class they have been attending for over a decade. The yoga class was on an upper floor of a large Bandra church, in a large airy room. The fans were whirring and a large red cross was lit up and visible through the open windows. There were some 30 people gathered for the yoga class, and apart from my friends, they were all Christian. My friends are a Hindu couple, but like just about all my Hindu friends in India, they prefer to say they are secular - meaning that India's pluralism is infinitely more important to them than any hint of Hindu clannishness and Hindu nationalism. I have learned on this trip that many Hindu people committed to minority rights and to India as a vibrant secular democracy stay away from the label, "Hindu." 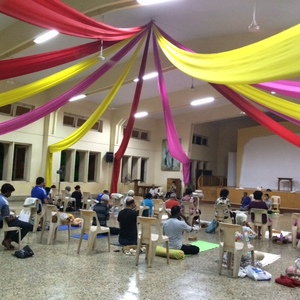 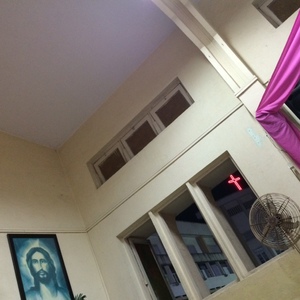 My organization Sadhana is committed to building a platform for progressive Hindus to speak up for the social justice values and teachings at the heart of Hinduism -- teachings like oneness of all, the ideal of non-violence, the notion that multiple paths are valid and lead to the same ultimate truth. We have been trying to understand why people born into Hindu families and who are involved in progressive work or who embrace progressive politics don't like identifying as Hindu. On this trip where I have tried to be a quiet witness and just listen rather than speak, I have had a small insight into why people would make this choice. Hindus are the majority in this country, and indeed most Hindus in this country do proudly identify as Hindus. As for those who are intellectuals or involved in progressive or left-leaning work, to identify and assert oneself as Hindu in India is tantamount to asserting the obvious majoritarian privileges that come with being Hindu. People know exactly who is a caste Hindu and who isn't; they feel it doesn't need to be stated. What's more, what is considered more urgent is the strong expression of India's secular identity.

My mission and Sadhana's remains to build a progressive Hindu platform, and we will continue our search for Hindus who are comfortable identifying as Hindu and connecting their beliefs to their progressive and pluralistic work in the world. As much as I understand and respect those secularists for whom this isn't the right path, I am surer than ever that India is full of compassionate Hindus who are every day doing their part for justice and self-determination of the neediest in this land. I have met a few such people on this trip, and their existence means that there are millions more like them. While it is important for secularists in India to stand up for their vision of their nation as a secular democracy, I also believe firmly that those who are Hindu in faith and practice and have that same vision of a secular India should speak openly as Hindus--thus we will wrest back a pluralistic sense of (and expression of) Hindu identity from the Hindu nationalism of Hindutva.

As I walked up the stairs to the great hall where the class would be conducted, I remembered the conversations with my children, friends and colleagues in the United States about cultural appropriation. I have never been comfortable with movements that assert a separatist view of culture. I find great hope in those instances when a non-Indian wears a bindi or a kurta; when we get to eat Indian food far from this land, when I learn of the cultural and philosophical exchanges that have been turning the great wheel of human history, for instance the influence on Tolstoy and Thoreau on Gandhi, and then the influence of Gandhi on King, and now the influence of King on contemporary movements for minority rights in India. These exchanges are beautiful to me, and I don't think of them as appropriation.

My secular Jewish husband, Stephan, was with me throughout this trip. He is a student of Western philosophy, particularly Hegel and Heidegger, and the soundtrack to our travels was the ongoing dialogue between Swami Bodhananda and Stephan on the points on which Vedanta and these philosophers converge and diverge. Swami Bodhananda has read an immense amount of literature and philosophy from around the world, and this exposure has deepened his understanding and practice of Vedanta. Never did he feel any barrier to learning from other cultures and philosophies, and never did Swamiji make Stephan feel that Hindu philosophy and ritual were reserved for those of Hindu faith.

All these thoughts flooded my mind as I climbed those church steps to the yoga class. The class is usually led by Father Joseph Pereira, a pluralistic Christian leader who won the Padmashree award for his humanitarian work through Kripa Foundation to address substance abuse and addiction in India. Father Pereira, I learned, was a student of B.K.S. Iyengar himself. At the beginning of the class, the teacher asked us to think of the God of our choice, if we wished to. Since the class was mostly made up of Christians, most students crossed their hearts and the class began. This was a pranayam class where we breathed deeply while holding postures in which the body, the chest, the arms, the hips--the heart--were open.

Try as I might, I couldn't still my thoughts or my emotions as I adjusted my body into each new pose and breathed. I thought of the many people who would likely object to a yoga class in a church. I thought of what it meant to be open-minded and open-hearted like Swami Bodhananda and Father Pereira.

As I lay down on bolsters and blocks, I heard the sound of the church choir downstairs and I caught sight of the red cross outside the window. This is the true heart of Christianity, Hinduism, Islam, indeed humanity: coming together in openness. I thought too of Hindus who want to "take back yoga," and the Canadian university that has banned yoga because its practice by non-Hindus is seen as cultural appropriation. Perhaps such separatist movements have their legitimate space in social justice struggles, but I was clearer than ever that I could never participate in building such walls. Lying with my chest open, arms outstretched, in this church, I knew that yoga belongs to all who love and practice it.

The friend who brought me to this class has just been through and conquered ovarian cancer. She attended this class throughout her crisis and treatment. Father Pereira and the students in this class held my friend through the ordeal, praying for her, asking after her, expressing love and concern every step of the way. They didn't reserve their love (which after all, is the deepest form of human solidarity) for their own; they held my friend through her ordeal even though she is from the majority Hindu religion.

I will return to the United States tomorrow, and I hope to share stories of some of my travels and learnings. The deepest learning is that the heart of India is pluralistic -- whether it is the two Hindu families I met who are devoted to the uplifting of the needy regardless of caste and religion; whether it is Father Pereira and his audaciously secular act of teaching yoga in his church; and whether it is Swami Bodhananda's immense generosity in engaging deeply with all seekers who come to him, regardless of race, religion, caste and gender.