I finally got to see El Anatsui's show, "Pot of Wisdom," at Jack Shainman Gallery, just before it closed this past weekend. I had to see the show not the least because I was curious to see how much the artist had advanced the subtle but significant experiments he brought to bear on his sculptural language in the past couple of years. For anyone who has been following Anatsui's work, particularly if you took to heart the critic Ken Johnson's worry in 2008 that the novelty of what he called "gorgeous drapery out of liquor bottle caps" might wear off too soon, becoming "routine craft," this was crucial.

Two years ago when I visited Anatsui at his studio outside the University of Nigeria, Nsukka campus in Eastern Nigeria, it was clear to me that he was already seeing his sculpture move in a different direction from where it had been for nearly a decade. At the Jack Shainman show, this change is emphatically evident. Whereas many observers have routinely compared his work to the Ghanaian Kente cloth, famous for its clearly patterned narrow strips, the Jack Shainman show makes clear that to Anatsui, his metal work has little to do with the formal sensibilities of a textile form and much more to do with exploring the possibilities of wall-bound (and occasionally freestanding) sculpture, and with a medium that allowed him to experiment with color and texture in ways previous impossible in sculpture.

I went to see this show with my three-year-old daughter Ngozichukwu, and the one work that she could not get away from was Uwa (2012), which in Igbo translates to "world," but which my daughter gave the rather poetic title "Meatball." I thought it was a less-appetizing subject. The only free-standing sculpture in the show, Uwa is a suspended large ball of twisted and stringed strips with a trail of the same stuff, as well some other irregular pieces, strewn on the floor. It is impossible to not see in this piece an anxious vision of the earth, not unlike the predictions of environmental science 2.0.

But what does one make of the signal work in the show titled They Finally Broke the Pot of Wisdom (2011) installed at the back end of the gallery? This sprawling, shimmering piece, with its passages of densely layered mass of diaphanous forms and areas of deep, opaque, undulating folds, may be the one work that reminds you, compositionally, of his earlier metal sculptures. But it is intriguing nevertheless. Just think of the title. Who broke what pot of wisdom, and why? Anatsui has always loved proverbial speech, like generations of West African poets and griots.

As I was leaving the gallery, passing by Uwa one more time, it occurred to me that these two works -- positioned as the show's conceptual two bookends -- must be about the same thing: if the knowledge and practices that have kept the world in dynamic balance over the millennia cannot be safeguarded or sustained, the world will crumble and die. One only needs to think of the titles of the works on show, most of which are either topographical, nature-based or about heightened consciousness to get the drift of his proverbs.

So in between the stunning gestural forms Anatsui has made out of simple bottle tops, and the dramatic patterns, colors and shapes with which he constitutes his enigmatic sculptures, is tucked proverbs about knowledge, human action and the fate of our world. 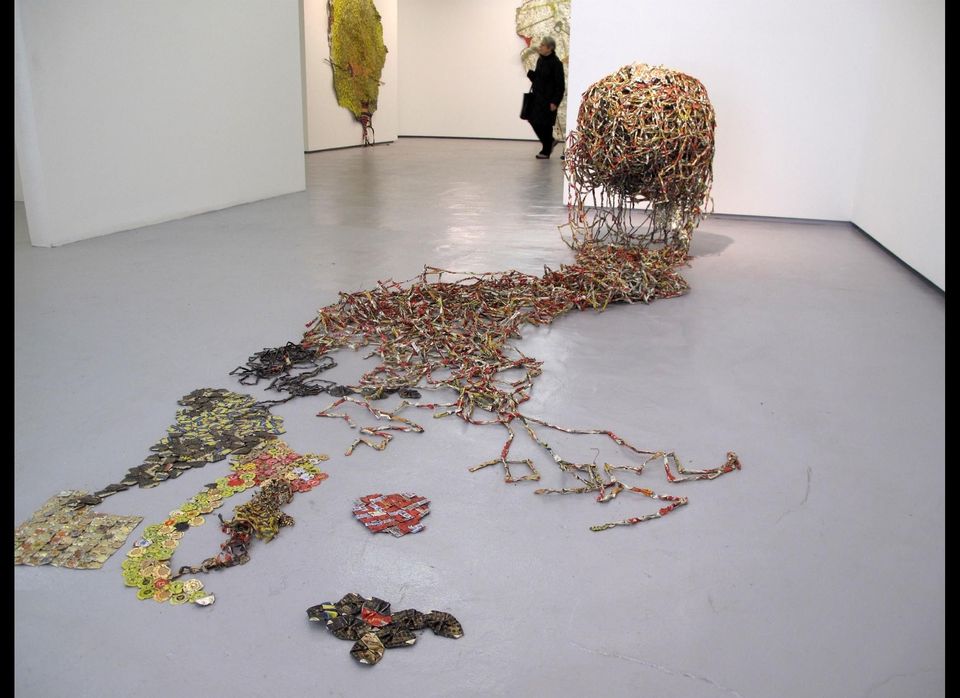