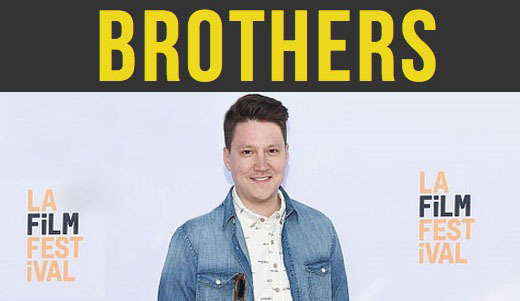 I talked with filmmaker and writer Emmett Jack Lundberg about the second season of his web series "Brothers" the first narrative series about a group of transgender male friends that not only features the stories about trans men but also casts trans actors in the main roles. The show follows four transgender men navigating life and love in Brooklyn, NY and touches on a few of the many issues that face transgender individuals including healthcare, dating, transphobia, identity and more. Season One is currently on Vimeo On Demand and Amazon Prime. In a quick summary, Jack the series' main character starts sleeping with a cisgender man after exclusively dating women. His friend Davyn proposed to his long time girlfriend Amy with disastrous results. Aiden the youngest member of the group who is pre-testosterone and pre-surgery tries to raise money for his upcoming top surgery but becomes disenchanted at the last minute. Then Max who has been on hormones longer than both Jack and Davyn can't get the financial resources to obtain his top surgery. In season two Jack is still struggling with his sexual identity while Max is living through the hell of online dating. Davyn has fled his disastrous relationship and New York as Aiden has plummeted down a rabbit hole of addiction and depression. The core group has shifted and fractured as the "Brothers" are no longer one big happy family. Along with a host of new characters the guys discover whether testosterone is actually thicker than blood. I talked to Emmett about his inspiration for his web series "Brothers" and his spin on our LGBT issues prior to the Orlando Massacre.
LISTEN:

When asked what his personal commitment is to LGBT civil right and what he would like to see happen for LGBT equality in the next few years Lundberg stated:

I think for me as the filmmaker you know the stories I want to tell are very much stories that are overlooked and for me that's the way I feel comfortable and good about giving back and adding something to the community...I think a huge thing for me in LGBT equality is specifically trans healthcare. You know the healthcare system in our country in general is pretty messed up but for trans people it can be really terrifying and difficult to navigate. You know you have to pay for your own surgery and having to do all these things out of pocket when really all these things should be covered.

Emmett Jack Lundberg series "Brothers" was named one of indieWIRE's 10 Best Indie TV Series and ET Online's "Six Web Series to Watch While Waiting for Transparent to Return". SiriusXM called it "More revolutionary than "Orange Is The New Black." Season 2, Episode 1 has already screened at several festivals and has won "Best in LGBT+" at the Buffer Festival in Toronto, Canada. As a writer Lundberg co-edited and contributed to "Finding Masculinity", an anthology of trans masculine essays that was published by Riverdale Avenue Books in May 2015.
For More Info: brothersseries.com