Let's say space aliens land. They forcibly take you back to their flying saucer to examine you, possibly as a prelude to intergalactic invasion.

If it were to really happen, it would be the worst sort of experience -- akin to rape, murder and other violent crimes.

Nevertheless, alien abduction has always been the domain of science fiction and unexplained phenomena. In Myrtle Beach, S.C., it's the subject of "Encounters: UFO Experience," a family-friendly exhibition opening on April 6 at Broadway at the Beach.

Visitors will take an interactive journey that showcases ancient mysteries, military involvement with UFOs and pop culture's enthrallment with aliens and outer space.

"The exhibition is divided into seven distinct galleries. The first one is Ancient Encounters, which focuses on the unsolved mysteries of ancient times, megalithic structures that are still questionable today as to how they could have been built with the tools that were available at the time," said Brian Bouquet, who has spent the past five years designing "Encounters" for The Event Agency.

"This gallery also encompasses some Egyptian walls that we've recreated -- hieroglyphics which show very early identifications of flying objects, be it spaceships or what they felt was in the air that was not of this Earth," Bouquet told The Huffington Post.

The exhibition includes recreations of ancient Sumerian tablets, alleged alien skulls, metallic books from caves in Ecuador, Indian Sanskrit tablets and lifesize rock structures from Mayan pyramids and the pyramids of Giza -- all with a focus on piecing together the puzzle of possible ancient extraterrestrial influences on our planet.

The seven galleries that make up the "Encounters" exhibition are:

The exhibition is being promoted as family-friendly. And yet, probably the most anticipated interactive encounter promises to be a simulated alien abduction, culminating in a close-up view of the inside of an alien spaceship -- based on eyewitness reported accounts over many years.

How can an alien abduction simulation be family-friendly?

"It's more of an experience than an actual abduction," Bouquet explained. "We have a specific gallery of a bright light experience. You walk in the room where the temperature is different from the rest of the galleries. It's very warm in there, the room is filled with fog, and there are bright lights that are so bright, you can't tell whether you're in the room alone or with other people.

"It's the opposite of being in total darkness. You're in absolute light where you can't identify one foot in front of you. Your vision is somewhat askew. That is the recreation that we've gone for -- it's not the horror of an alien abduction that some people portray it as. We've taken a different approach on what an abduction is in that it's a warm sense and somewhat comforting to be alone in your own space."

But for parents who may feel that this might be a little too intense for small children, the exhibit will include a caution sign and allow them to go around that gallery in an alternative route.

Even the exhibit's general manager, Jessica Rodimon, doesn't like to be frightened, but assured HuffPost that this exhibit really is fun, entertaining and informative.

"I get scared quite a bit and don't really do scary movies or haunted houses. I hate being scared," Rodimon said. "But walking through that one gallery is not scary in the least. You might get a little hesitation, but then you realize everything's OK on the other side. It's not meant to scare people -- it's more meant to open their eyes to the possibility that there are aliens out there."

One of the reasons Myrtle Beach was chosen to host the exhibit was because of numerous UFO sightings in this area -- 59 reported in 2012. Most eyewitnesses have described bright orange lights in the sky and fiery red balls of light over the ocean.

And there've been many videos taken of these lights.

"My concern started growing because of the proximity in which these lights were getting to my immediate house and family, within 100-200 yards away and just 50 feet off the ground," local resident Joe Kiernan told HuffPost.

"These lights seem to be interested in two nearby ponds. They don't look like or move like meteors. They have an arc to them, and just as they look like they're going to come to a complete stop while falling, they'll shoot back up in the air, like they're playing leap frog," Kiernan said.

"They usually travel across the sky with a lot of bright white flashes," he added. "When they're over the ponds, all the flashing stops and they all start glowing a bright orange, and then, one by one, they take off directly toward the ocean."

The creators of this unique exhibition have designed it with a specific approach when it comes to UFOs and aliens.

"Our attitude is that it is real," said Bouquet. "From witness accounts and our research, we have trust in those accounts and we believe that [UFOs and aliens] are real. We hope that people who come through our exhibition open their eyes a little bit and say, 'OK, that is a really unusual finding.'

"There are a lot of facts in there, whether they're witness accounts or documentation. We're hoping people leave our exhibition with a much greater awareness of the (possibility) that extraterrestrial life exists and that it's been to Earth."

"Encounters: UFO Experience" will finish its Myrtle Beach run on Labor Day and embark on its first worldwide tour, following in the footsteps of two other hugely successful touring presentations created by The Event Agency -- "Titanic: The Artifact Exhibition" and "Bodies: The Exhibition." 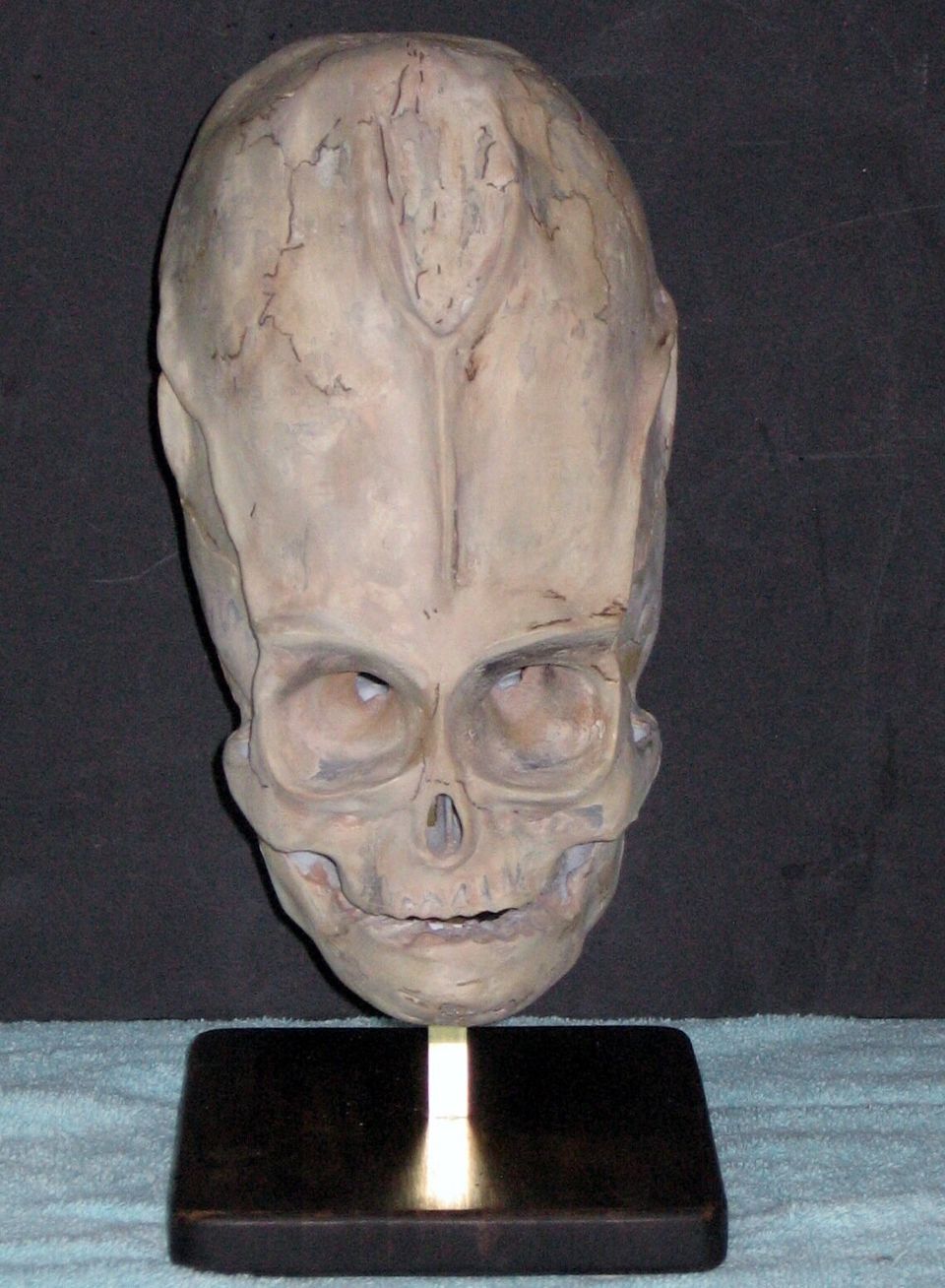 1 / 9
Alien-Like Skull Reproduction
Encounters: UFO Experience is the world's first exhibition focusing on historical and current UFO reports and alleged alien contacts. The attraction is located in Myrtle Beach, S.C. This first image shows a replica of one of 13 alien-like skulls found in 1999 at an ancient burial site in Sonora, Mexico. The next slide shows the skull from the left side.
Intergalactic Brands