"We have to get used to living with terrorism," a columnist for a government-backed Turkish newspaper said yesterday after another deadly bombing in Ankara.

But Turkish citizens' raw emotion showed everything but inurement. Turkey doesn't have to get used to this horror, if Turkish President Recep Tayyip Erdogan acts wisely now.

Although no group has yet taken responsibility for the attack, which killed 37 people, suspicion has fallen on the Kurdistan Freedom Falcons, or TAK, a splinter group of the Kurdistan Workers' Party. After a bombing last month, also in Ankara, the TAK warned, "From now on, the AKP [the ruling Justice and Development party] and its collaborators won't be able to live in a fascist dictatorship so comfortably in their own city." Turkish officials stated this morning that they identified one of the reported bombers, a 24-year-old woman from the eastern city of Kars, who supposedly joined the ranks of the PKK in 2013. 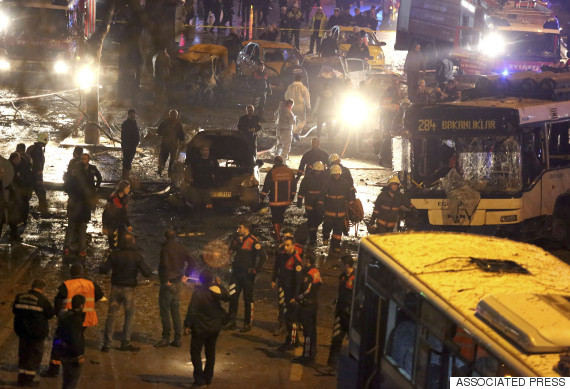 Members of emergency services at the scene of an explosion in Ankara on March 13. (Riza Ozel/Hurriyet Daily via AP)

The recent attacks could be a harbinger of more to come; it seems the whole armed Kurdish movement is preparing for a violent spring. Or, more precise, the armed left in Turkey is preparing. Just this weekend, the PKK, which started its violent campaign against the Turkish state in 1984, announced that it will coordinate its strength, strategy and attacks with some ten Turkish leftist armed groups from now on. This renewed cooperation indicates violence could spread further across Turkey.

At the same time as the bomb attack in Ankara, the Turkish army cracked down in the mainly Kurdish cities of Yuksekova and Sirnak in the southeast. The cities are now under indefinite curfew. Such curfews, which enable army operations against militant groups entrenched in the towns, have led to considerable civilian deaths. As Selahattin Demirtas, the co-leader of a leftist party rooted in the Kurdish political movement put it, "New operations mean new massacres." Kurdish cities in the southeast will not be the only places prone to violence in the coming weeks. Ever since a ceasefire between the PKK and the Turkish government collapsed last summer, Kurdish politicians are increasingly blamed for the violence in the country. The government wants to lift parliamentary immunity from several People's Democratic Party politicians, including Demirtas. During parliamentary elections last year, nationalists carried out many attacks against HDP offices across the country. To assume this will not resume is naive. 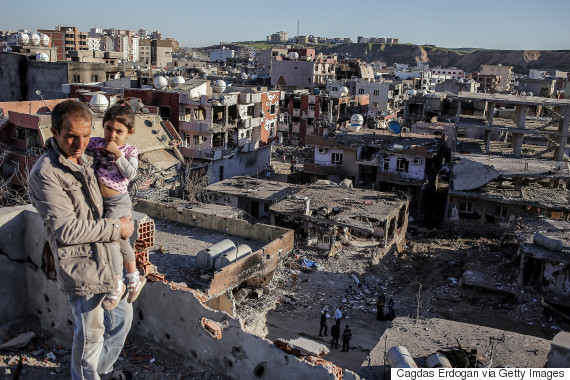 A man holds his daughter as he looks out at the ruined houses of Cizre, Turkey on March 2. (Cagdas Erdogan/Getty Images)

Turkey's massacres have become, in short, predictable. And even if the Kurdish armed movement is responsible for the last two attacks in Ankara, it is only Turkey's powerful president who can turn the tide. If he were brave, he would stop seeking absolute power and instead make his top priority the safety of his people. He would start talks again with the Kurdish leader who holds power over those who commit this violence, the imprisoned Abdullah Ocalan.

Talking to him again and giving him the opportunity to talk to those who consider him their leader is the only way to turn the tide. It would show that the government is willing to negotiate again and ready to abandon ineffective efforts to stop violence with violence. This willingness, combined with an immediate halt to operations in the southeast, might be enough for both the TAK and the PKK to give the negotiating table a chance, to change their strategy from pursuing an all-out war against the state.

If Erdogan doesn't act now, he will soon not be able to control the violence. If he continues to push towards an executive presidency with himself in the seat, he will be a man with considerable power -- except the power to force a violent genie back into its bottle.