When two driven and career-focused individuals consider building a family together, there are likely many discussions and decisions to be negotiated. Such was the case for Mike Ashburn and his husband Eric Lanyard.

“About 16 years ago, I moved to Los Angeles with the hope of working in the entertainment industry, but not really knowing how to go about that or if it was really even possible,” Eric recalled. “I took a job with a big firm right out of law school, which is kind of the easy route; they sort of funnel you into those firm jobs. But as soon I was there, I knew I didn’t want to do that and I wanted to get into an entertainment company. So then I just started applying to every entertainment job I could find. This was back when you would literally look in the classifieds in the back of Variety. I kept applying and after interviewing at nine places, I finally go a call from HBO. And I hit it off with the guy that would become my boss for seven years in the legal department. It was definitely an aligning of the stars moment to get that job.”

“Out of high school I joined the Army in a two-year enlistment and served in the first Gulf War,” said Mike. “Later, I finished college with a bachelor’s degree in criminal justice. But once I moved from Sacramento to Los Angeles to be with Eric, I ended up launching a career in entertainment post-production.”

As Mike and Eric moved through their 30s together the number 40 loomed on their horizon -- they are now both 43 -- the pair found that their biological clocks kicked into high gear. They began exploring all their family building options and ultimately decided on adoption.

“We had talked about it for years, but weren’t putting any action into it,” said Eric. “By the time we were in our late thirties and living in Manhattan, nothing about our lives indicated we were on the cusp of fatherhood. But then we started going to listen to guest speakers at the Gay and Lesbian Center and things got real quickly. There was the surrogate person, and the adoption person… The decision was not a huge debate for us. Adopting a child who needed a home was clearly the right thing for us. We were surprisingly casual about the impending change that was looming, but we did not make major adjustments to our life during the months we waited for the baby to arrive. We were the first of our close circle of friends to take the plunge and we just sort of operated on a leap of faith that everything would fall into place when we needed it to.”

After waiting 18 months for their child’s arrival, the men received a sudden call on a Monday night to pick up their baby boy the next morning.

“Let me be honest: neither one of us had changed a diaper before,” admitted Eric. “We really didn’t know what we were doing. We had started reading some baby books, but we were living in a small apartment and didn’t have any baby supplies. So our crash course in parenting started the night we got that phone call, which by the way isn’t such a bad way to do it! We ran to a store with our list of what we would need, bought everything in a one-hour shopping spree, and showed up at the hospital the next day to bring our son Austin home.” 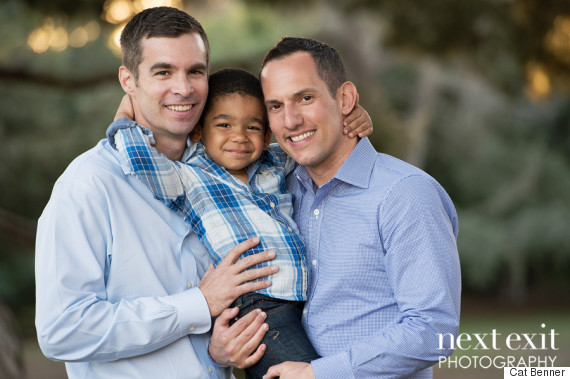 This summer Eric and Mike will celebrate their 15th anniversary together. Eric works as the Vice President of Business Affairs at HBO and has served as a RaiseAChild.US board member for the past three years. More importantly, these men are great fathers to a beautiful son.

“When we made the decision that I would be the stay-at-home dad, I had no idea if it was going to be my greatest joy or my greatest mistake,” said Mike. “The whole work environment is how many people define themselves. So you do worry about it. Few people have made jokes that I’m the mom of the family, and that ‘s simply not true. I’m the stay-at home-dad and Eric’s the go-to-work Papa. No one’s been more surprised than us at how well the whole operation is running! I jumped into it and gave it everything I had. I feel very satisfied doing this but I can also see a return to a career in my future as our son grows.”

Meanwhile, Mike keeps in touch with adult friends through playing in a West Hollywood gay basketball league twice a week.

“Usually about the time that Eric comes home from work, I am ready for him to give me a bit of a break from Austin,” Mike admitted. “I’ll either go grab us some dinner or occasionally cook something. My cooking is a work in progress, but I’ve made some gains. Neither Eric or Austin is the easiest to cook for.”

As for Eric, he treasures his evening time with his young son.

“When I get home sometime between 7:00 and 7:30, from that moment on in the house I’m with Austin all the way through to his bedtime,” said Eric. “And I can’t emphasize enough that it doesn’t feel like a chore to me. I love my evenings with him. I look forward to them. With my job, I definitely have things that take me away maybe more than I would like, but I insist on keeping a balance. Whether it’s a work event or a social obligation -- with my career it’s sometimes both -- I try my hardest and have mostly succeeded at not being out more than two nights a week. I grew up in a family where there was no question that my brother and I were the center of our parents’ universe. I know how it benefitted me. So Austin has always been and will remain, of course, our first priority.”

Rich Valenza is the Founder and CEO of RaiseAChild.US, a national organization headquartered in Hollywood, California that encourages the LGBT community to build families through fostering and adopting to serve the needs of the 400,000 children in the U.S. foster care system. Since 2011, RaiseAChild.US has run media campaigns and events to educate prospective parents and the public, and has engaged more than 2,500 prospective parents. For information about how you can become a foster or fost/adopt parent, visit www.RaiseAChild.US.