In 1979, "Saturday Night Live's" Jane Curtin and Dan Aykroyd faced off to parody a "60 Minutes" debate.

"Jane, you ignorant slut," Aykroyd began, playing the offensive traditionalist. "Dan, you pompous ass," Curtin would counter. The sketch is a classic, but there's an odd imbalance between the insults each comedian uses. Aykroyd is able to attack Curtin's sexual history, intellect and moral code, while Curtin's response only cuts so deep as to imply that he's unpleasant.

It's only a joke, but one that shows how our language makes it much easier to insult women, often based on their sexuality. Luckily, the Internet is here to plug that gender gap, and there's another biting term for men picking up speed: "fuckboy."

It doesn't mean what you (might) think it means.

In essence, a fuckboy (sometimes stylized "fuckboi" or "fuccboi") is a (usually straight, white) dude embodying something akin to the "man whore" label, mashed up with some "basic" qualities and a light-to-heavy sprinkling of misogyny. But consensus on a singular definition is a work in progress.

In its original context, the word was used to insult a man for lack of traditional masculinity. On Urban Dictionary -- the respected authority on such matters -- the first definition of a fuckboy, from December 2004, is "a person who is a weak ass pussy." Nothing new. But in the second entry, written nearly ten years later, fuckboys take on a different set of traits, like "relies on his mom but doesn't respect women" and "can't find the clitoris."

Connor who won't calm down with his axe spray tryna infect ya lungs cause he's a fuckboy, reads one example sentence. And another: Timothy over here asking' for nudes when all u did was say hello so he's a fuckboy.

Here the term changes meaning, dismissing the subject's ego and going so far as to call out his inappropriate sexual advances. Insults like that are few and far between. Sure, we can use "man whore" or a "male slut," but the necessity of those modifiers drives home the fact that whores and sluts are, inherently, women. (Plus, terms like "man whore" attack a man based on his presumed number of sexual partners -- "fuckboy" speaks much more to his character.) 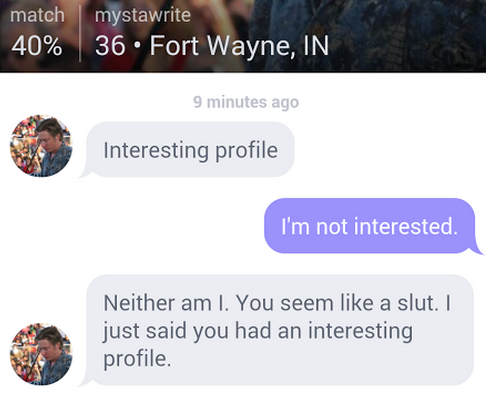 The more recent Urban Dictionary entry has 4,000 fewer upvotes than the "weak ass" definition above it -- though the first had a decade to accrue those votes of approval -- but, after getting reposted to Tumblr, got over 400,000 likes and reblogs. A few months later, a blog on the site called Fuckboy Files popped up, which is essentially a screenshot chronicle of the cringeworthy pickup lines sent to one 25-year-old woman via online dating sites. Now, a simple search now returns a nearly endless stream of Tumblr text posts despairing fuckboys in the dating scene.

It's not hard to see why "fuckboy" is suddenly so popular. It's immensely satisfying to say -- a harsh consonant kicks off a cutting expletive attached to a word that feels comically small. The target is a "boy." Not a "man." It's both wonderfully vulgar and emasculating.

A Google search shows the term being used as far back as 2002, when it appeared in a Cam'ron song called "Boy, Boy." More recently, it's been used in a growing number of rap and hip-hop songs, as its definition evolves from weakness to something more like douchebaggery.

Yes, it's a mean word. But forgive us for withholding sympathy for dudes who try to walk all over women in the name of sex and personal favors -- and then get called out pointedly for doing so.

A February 2015 Thought Catalog post described fuckboys as a band of unfaithful, attention-craving bros, while over on BuzzFeed, signs you're dealing with a fuckboy include misspelled tattoos and two or more mirror selfies on Instagram. A guy's appearance, however tasteless, doesn't seem to make a fuckboy on its own -- it's when those traits are paired with shitty behavior, the more serious offense, that a fuckboy really shines.

There will always be jerks out there, but at least now we have one more (kinda hilarious) word to describe them -- with no female equivalent. While it isn't exactly equality, it does give us another way to call out the bad behavior that accompanies unchecked male privilege in the romance department.

Feel free to join us as we chill out in this nirvana:

10 Women On Why Feminism Still Matters