The eyes may be the window to the soul, but apparently the face is key for first impressions.

In a new study, researchers in the United Kingdom investigated how facial features can impact first impressions. As it turns out, the presence of certain physical characteristics can enable scientists to predict what initial judgments will be drawn.

"If people are forming these first impressions, just based on looking at somebody's face, what is it about the image of the face that's giving that impression -- can we measure it exactly?" lead researcher Dr. Tom Hartley, a neuroscientist at the University of York, told BBC News.

For the study, the team found photographs of 1,000 real faces on the Internet. They then analyzed the visages and described 65 different facial features, including nose curve and eyebrow width, for each. The measurable descriptions were used to create a computer model capable of predicting first impressions.

To test the accuracy of the model, the team also reversed course and had the model create faces for human raters to judge.

The research model was able to account for 58 percent of the variance in impressions when human subjects judged the same faces. Each subject rated the faces on most-to-least scales for 16 traits, such as attractiveness and trustworthiness. The social traits were then evaluated in terms of three measures: approachability, youthful attractiveness and dominance. 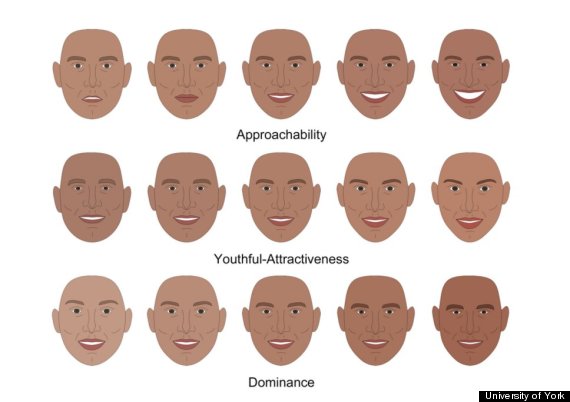 An illustration from the study shows the three main measures evaluated in the study in order from least (on the left) to most (right).

For approachability, facial features concerning the mouth, such as mouth shape, were the most important. As seen in the image of model-generated faces (above), the corners of the mouth point slightly downward in the less approachable faces and turn upward in the visages that were scored as more approachable.

"Some of our most important judgments do depend on fairly obvious features: A smile looks friendly, and an angry expression makes you less approachable," Hartley told HealthDay. "However, many of the features we identified as correlated with social impressions are far less obvious. For example, an unapproachable-looking person has a pale, drawn appearance."

In terms of youthfulness and attractiveness, characteristics of the eye and eyebrows were most strongly linked with the measure. For example, in the illustration above, the face farthest to the right features larger eyes and eyebrows with a more dramatic arch.

As for dominance, that measure was most associated with facial features that may be construed as stereotypically masculine.

While the study demonstrated that facial features seem to have a significant impact on initial social judgments, one specific facial feature doesn't always responsible for first impressions. Instead, researchers say, it's a matter of how several facial features appear together.

These findings were published Monday in the Proceedings of the National Academy of Science.