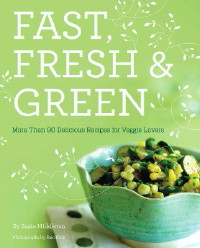 Last week, I watched a goat give birth. It was maybe the most amazing thing I've seen in my whole life. On Wednesday, I harvested potatoes and peas and arugula from my very own "market" garden -- and made $22 selling them at the farm stand (woo-hoo!). That in itself was the fulfillment of a lifelong dream. And then, on Friday, I picked up a copy of People magazine and read a review of my new cookbook, Fast, Fresh & Green, which, as luck would have it, has turned out to be an instant hit.

The juxtaposition of these things seems stranger than fiction to me. Here I am, living on an island, where I arrived two years ago to pursue a simpler, quieter life. This wasn't a casual move. I had to reach a spiritual bottom in order to understand that I needed to be reconnected with the source of my food to be happy. I was a cook and a writer, but in my day (and night) job as the stressed-out chief editor of a cooking magazine, I didn't even have time to get to a farmers' market.

So I traded in my closetful of frilly skirts and pointy-toe shoes for blue jeans and mucky barnyard boots. Swapped the big house for a tiny apartment, the secure salary for the pitiful income of a freelance food writer, the restaurant dinners for local chickens and potlucks at the Ag Hall. I left the office for the stove and the garden, and shed the madness of I-95 for the joy of a ferry ride.

I couldn't be happier or more satisfied. But selfishly, part of me thinks that now I should just get to be citizen Susie, instead of food writer Susie Middleton, who has to go out in the world and promote herself! I just want to grow my vegetables, cook my vegetables, write about my vegetables... oh, yeah, writing. Well, therein lies the truth: If I really just wanted to do my own thing, I wouldn't blog about it, and I wouldn't have written Fast, Fresh & Green the way I did. (The book, by the way, is a collection of more than 90 easy vegetable side dishes organized by nine great techniques for cooking them. I was very lucky to have the wonderful Chronicle Books design and publish the book, so it's not only useful, but pretty, too.)

I didn't write Fast, Fresh & Green for people who are already great cooks, with years of cooking experience under their belts. Nor did I write it for vegetarians or people who are really happy with the number and variety of vegetables they eat every day. (Although many of these folks are, in fact, enjoying cooking from the book.) I wrote the book for everyone who wants to cook with more vegetables. For everyone who cooks for picky eaters who don't think they like vegetables. For people who want to learn basic cooking skills, to cook at home more, and to eat a little better. That's a lot of us.

And what totally makes my day -- makes this food writing thing almost as cool as the goats and the farm stand (and it has nothing to do with People magazine) -- is that folks who've never cooked vegetables are cooking from Fast, Fresh & Green. And people who've been stuck in a vegetable rut tell me they're cooking their way through the entire book! They tell me the recipes (see below for a sample) are easy and delicious, and best of all, that they don't have to run around all over town to find exotic ingredients. I find this so awesome, because I feel strongly about helping people get back in the kitchen.

I think everyone with good cooking skills has a responsibility to share them these days, whether it's with a friend, a small child, or a blog audience. Because cooking at home isn't just one of the keys to a sane, balanced life (I should know!); it's one of the best tools we have as individuals to help (collectively) turn the ship around. The ship carrying the obesity and diabetes epidemics. The ship made of overly processed corn syrup-saturated food, steered by the behemoth known as Big Ag. (One wonders how this ship even floats.) The ship that leaves behind it a wake of citizens disconnected from the natural world of food--the natural world where vegetables are grown and animals raised in symbiotic ways that are sustainable in the long run.

So on days when I feel frustrated about these conundrums and wonder what one individual can do in the face of powerful forces, I consider the simple miracle of home cooking, of eating whole fresh foods, and of the joy that comes from sitting down at the dinner table to eat food that you cooked yourself or even gathered or grew yourself. To celebrate that joy, here's a recipe from Fast, Fresh & Green that makes the most of one of summer's sweetest treats--fresh corn, off the cob.

Use this recipe as a template and feel free to make substitutions. Instead of cilantro, use mint or basil (or a combination), replace the lime with lemon, or try a combination of cumin and coriander in place of the ancho chile powder. You could also use a little diced bell pepper in place of some of the onion, or you could add 1/2 teaspoon of minced serrano or jalapeno pepper to the onions.

When you saute corn, it always releases a bit of starch, which will brown on the bottom of the pan. This is the reason I suggest letting the saute sit for a few minutes in the pan after cooking. As the vegetables rest (especially the onions), they will release some moisture that will loosen some of the delicious browned bits, and you can then stir them in.

Melt 1 tablespoon of the butter with the olive oil in a 10-inch straight-sided skillet over medium-low heat. Add the onions and 1/2 teaspoon salt, cover, and cook, stirring occasionally, until translucent, about 5 minutes. Uncover, turn up the heat to medium, and saute, stirring frequently, until lightly browned, another 4 to 5 minutes.

Add the remaining 1 tablespoon butter, the corn kernels, and another 1/2 teaspoon salt. Cook, stirring frequently and scraping the bottom of the pan with a wooden spoon, until the corn is tender but still slightly toothy to the bite, 4 to 5 minutes. (It will begin to intensify in color, glisten, and be somewhat shrunken in size). Add the chile powder and cook, stirring, for 1 minute. Stir in the lime zest and remove the pan from the heat. Let the corn saute sit undisturbed for 2 minutes (moisture released from the vegetables as they sit will loosen browned bits) and stir again, scraping up the browned bits from the bottom of the pan.

Season the saute with a few generous grinds of pepper and a good squeeze of the lime. Stir in half of the cilantro. Let sit for another couple of minutes if you have time. Stir and season to taste with more salt, pepper, or lime juice. Stir in the remaining cilantro just before serving.

Tip: I find the safest way to cut corn off the cob is to snap the shucked ears in half first. Then put one half, cut side facing down, on a large cutting board and slice down the cob with a sharp knife using a sawing motion. Keep turning the cob until you've cut off all the kernels. Repeat with the other half. For convenience, I also put a large (old) dishtowel over my cutting board before I start. When I'm done cutting, I can fold the corners of the towel up and easily transfer the kernels to a bowl. Any way you do it, be aware that corn kernels do have a tendency to go flying when you cut them.


Susie Middleton is the former editor and current editor at large for Fine Cooking magazine. She blogs about cooking and growing vegetables on Martha's Vineyard at sixburnersue.com. Her first cookbook, Fast, Fresh & Green, is available at your local independent bookstore (and online, of course.)

Author, 'Fresh From the Farm: A Year of Recipes and Stories"