Histories of the Civil War and the mid-19th century mineral rush abound. But what happened shortly thereafter, when newly freed African Americans sought better lives across the U.S., is a story largely resigned to family albums and local historical societies like the one in Fergus Falls, Minn.

There, a collection of newspaper clippings and photographs, many donated by a woman named Lorraine Tate, tell the story of the "First 85," 60 men and boys and 25 women and girls who migrated from Kentucky on April 7, 1898.

According to an article published in the Fergus Falls Journal in 1933, the group of pioneers was the largest influx of African Americans to settle in a Western state. In Fergus Falls, they set up businesses and homes and raised families for generations. Descendants will gather on Aug. 11 to honor their ancestors' bold move.

But how did a trainload of African Americans end up in Fergus Falls? A 2007 documentary by Twin Cities Public Television sought to explain.

"There were veterans in Fergus Falls and they got a bright idea that they would take real estate brochures down to this event [the Grand Army of the Republic's annual encampment in St. Paul in 1896] and see who they could draw up to Otter Tail County," said Melissa Hermes, education coordinator for the Otter Tail County Historical Society. The pitch apparently appealed to the Army's African American troop, prompting them to pack up their families and move northwest.

"What was unique is that they came in one large group," Hermes told The Huffington Post. "They packed up the community around Bowling Green, Kentucky, and moved here en masse. As they traveled to get here, people were fascinated. You'd find stories in other newspapers as well."

Newspaper clippings and a series of letters recently acquired by the Kentucky Historical Society reveal to both Hermes and the descendants of the First 85 what life was like for African Americans after slavery and the American Civil War.

"They were really patriotic," Hermes said. "So many of these families had people that served their country in the Civil War ... and later, World War I."

"When they got here, one of the first things that they did was registered their kids in schools. Education was extremely important and they worked hard for their children to go to college," Hermes added. "A lot of the children of this original 85 were very successful, working for big companies like Honeywell," though she says the job opportunities are what ultimately pulled them away from small-town life.

"But it was not easy for them," Hermes continued, noting Minnesota's KKK activity, which peaked from the 1870s to the 1920s.

By the Depression, a scarcity of jobs and homestead opportunities, coupled with a disastrous tornado several years earlier, forced many families to disperse, Hermes said.

Descendants of the First 85 gathered for a reunion in 2010, a tradition they look forward to carrying on this year and beyond.

Fergus Falls 'First 85' Reunion Celebrates Black Role In How The West Was Won (PHOTOS)
The &quot;First 85&quot; &amp; Their Descendants 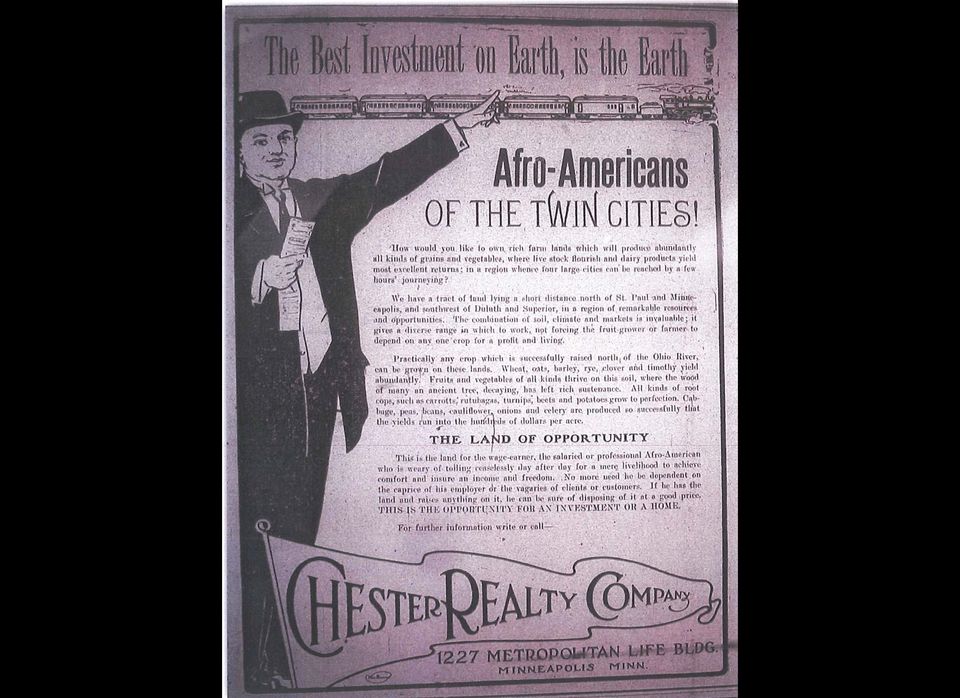 1 / 18
In 1896, real-estate agents distributed fliers to Kentucky African American veterans visiting the fairgrounds in St. Paul; the fliers highlighted Fergus Falls as a good settlement area. The community was described in a newspaper article as "the first exclusive Colored colony in Minnesota."
Courtesy Sylvia Loveless Amos