On Thursday I attended the first-ever White House Summit on Financial Capability and Empowerment. This event was yet more evidence that President Obama has done more than any president before him to advance financial knowledge in this country -- particularly among the young, who were well represented in a room normally filled with Important People in suits and ties. Government officials, employers, community leaders, NFL stars, and school kids all spent a few hours talking about what they're doing -- and what more can be done -- to help people take control of their financial futures. 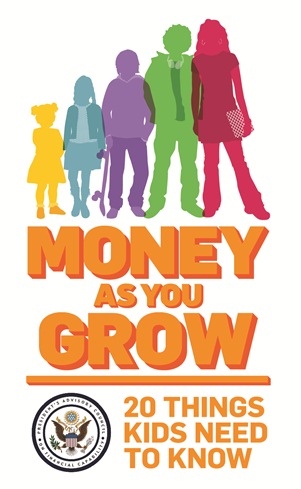 I was especially proud when Cecilia Munoz, the director of the White House's Domestic Policy Council, announced the launch of Money as You Grow. This online, interactive tool, which I spent more than a year working on as a member of the President's Advisory Council on Financial Capability and have mentioned on this blog a few times, gives families a way to teach kids, from ages three to 23 and beyond, the simple, essential money lessons they need to know as they grow.

Now is the moment to start teaching young Americans the ins and outs of personal finance. With higher than average unemployment rates and ballooning student loan debt (the total just reached the $1 trillion mark!), young people inhabit a daunting financial landscape. Yet recent surveys show that many of them can't answer even basic questions about interest, insurance, and how to comparison shop. (For the record: older adults don't fare much better on financial literacy tests.)

Nearly a quarter of young adults do not have bank accounts, which means their money isn't insured by the FDIC and they may be using payday lenders and other high-cost alternatives to perform basic services like cashing paychecks. Roughly two million college students who qualify for Pell Grants miss out because they don't apply. College students who leave school with debt owe, on average, around $25,000 in loans!

Research shows what many of us could already guess: The number one influence on young people's financial behavior is their parents. This is where Money as You Grow comes in. With its down-to-earth language and sound, clear principles, Money as You Grow gives adults the tools to be the best role models and teachers they can be. It draws on nearly every important curriculum, standard, and study that aims to educate children about money and distills the "greatest hits," if you will, into 20 age-appropriate lessons and corresponding activities designed to influence kids' financial behavior.

The lessons cover everything from basic realities ("You need money to buy things") to new realities ("It can be costly and dangerous to share information online"), driving home important lessons about saving, credit, paying for college, and investing (it's never too early to start!). You can see it for yourself at MoneyAsYouGrow.org.

Not long ago, one of my sons, still in grade school, asked my husband and me what compound interest was. After we got over our astonishment, I was able to tell him (check out Lesson #11 on MoneyAsYouGrow.org for a quick explanation), but not every parent is a financial journalist. (And even I need to brush up on some this stuff from time to time.) In fact, one of the best things about Money as You Grow and another project I was recently involved in, Sesame Workshop's For Me, For You, For Later, is that parents learn along with the kids.

Several government and nonprofit organizations including the USDA, American Library Association, and the National PTA have already partnered with the President's Advisory Council on Financial Capability to build awareness about Money as You Grow. The best part is that it's catching on with parents -- especially moms -- who are pinning it like crazy on Pinterest. In the week before it was officially unveiled at the summit, more than 100,000 people visited MoneyAsYouGrow.org! The goal: to reach more than 100 million families by year's end.

At the summit, Gene Sperling, director of the National Economic Council and someone whose advice I've come to value a great deal, remarked that after the recession from which we are still healing, we don't need more evidence that financially empowering people is a national economic imperative. Money as You Grow, he said, "is thoughtful, simple, and common sense," and can put people on the right path, just as driver's ed teaches kids the rules of the road before they get behind the wheel of their own car.

As a mother of three, I want Money as You Grow to be part of a broad movement to send kids out into our increasingly complex financial world ready to thrive. Together we can do this!

Beth Kobliner is a personal finance commentator and journalist, the author of the New York Times bestseller Get a Financial Life: Personal Finance in Your Twenties and Thirties, and a member of the President's Advisory Council on Financial Capability. Visit her at bethkobliner.com, follow her on Twitter, and like her on Facebook.

More:
Moneykids-and-money
Newsletter Sign Up
Everything you should have learned in school but didn’t
Subscribe to HuffPost’s money and living email.
Successfully Subscribed!
Realness delivered to your inbox

We’re In A Recession. Should You Be Saving Or Investing Your Money?