MOSCOW, Sept 13 (Reuters) - A fire killed 37 people in a Russian psychiatric hospital on Friday, the second deadly blaze at such a facility this year and it was likely to heighten concerns about Russia's treatment of the mentally ill and other wards of the state.

There have been many deadly fires at state institutions like hospitals and schools over the past decade, raising questions about safety standards. Russia is also dogged by transport and industrial accidents, and critics point to a culture of negligence bred by President Vladimir Putin's top-down ruling style.

The pre-dawn fire razed a dilapidated ward for severely ill patients at the hospital in a provincial village north of Moscow, apparently killing some while under sedation as fog slowed firefighters travelling from 45 km (28 miles) away.

Emergency authorities had recently sought to have the run-down wood, brick and concrete building condemned as unfit for use, a senior official said. Federal authorities began a criminal inquiry into suspected lethal negligence.

State television showed firefighters spraying water on the smoking, blackened ruins of the ward at the hospital - footage that has become grimly familiar after a number of deadly fires at state institutions in Russia in recent years.

A female orderly died while trying to save patients at the hospital in the village of Luka, which is in Novgorod province between Moscow and St Petersburg, the regional branch of the federal Investigative Committee said in a statement.

It said 37 people were killed, and the Emergency Situations Ministry said 15 bodies had been recovered by midday.

More than 20 patients were evacuated after the fire broke out shortly before 3 a.m. (2300 GMT on Thursday). Official initially said some others may have escaped on their own, but none had been found hours later by police combing the area.

The fire left little but the concrete foundation of the single-story building housing male patients at the hospital.

Volunteer firefighters began battling the blaze minutes after it started, but the nearest fire station is 45 km away and it took a crew 45 minutes to arrive on fog-shrouded roads, Interfax cited a top regional emergency official as saying.

Investigators and the chief doctor at the hospital said they suspected a patient started the fire, Russian news agencies reported, but regional governor Sergei Mitin said it might have been accidental.

"Medical personnel saw a patient who was shrouded in flames. ... It's possible that he was smoking in bed and the mattress caught fire," Mitin said, according to Interfax. He said the ward that caught fire housed severely ill patients.

"Sedatives were given to patients for whom they had been prescribed," Interfax quoted the chief doctor, Gusein Magomedov, as saying, but it was unclear how many were sedated when the blaze broke out.

Critics of the government say state authorities frequently blame the victims of fires in order to avoid culpability.

Emergency officials and prosecutors had sought to have the building condemned as unsafe, but a court instead ordered management to correct unspecified flaws by August 2014, the head of safety oversight for the Emergencies Ministry said.

"The building that burned was unfit for use," the official, Yuri Deshevykh, told state-run Itar-Tass news agency.

Fires with high death tolls have not been uncommon at state institutions including drug treatment centres and homes for the disabled over the past decade. In April, a fire at a psychiatric hospital outside Moscow killed 38 people.

The death rate from fires is much higher in Russia than in Western countries including he United States.

The nation of 142 million is also plagued by accidents on its roads, rails, rivers and in the workplace, taking the shine off a post-Soviet recovery for which Putin - in power since 2000 - claims a measure of credit.

But critics say Putin has made little progress stemming the corruption and corner-cutting blamed for many deadly accidents.

Yuri Savenko, president of the independent psychiatric association of Russia, said the shabby state of psychiatric hospitals was pushing up death tolls from fires. He said a third of the buildings at such facilities had been declared unfit for use since 2000. (Editing by Mark Heinrich) 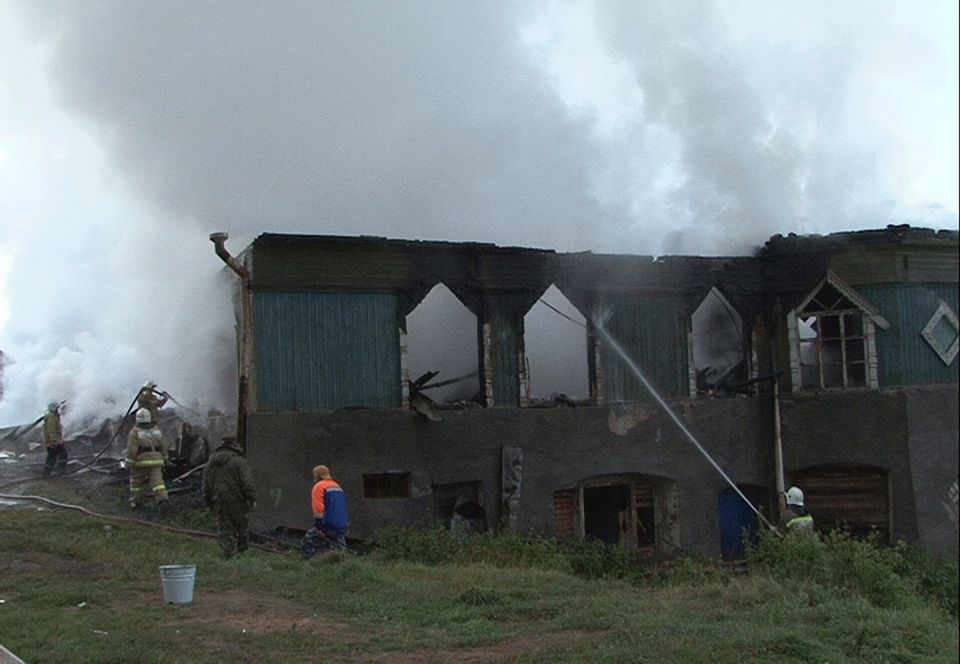