One cold December, when I was 7 months pregnant with my first daughter, my husband and I found out that my father-in-law had cancer.

Amongst the holly jollying and jingle bell rocking, I remember hearing words and phrases like "kidney" and "spreading" and "a few months left". But I couldn't make sense of it. My first close-up experience with cancer - and it felt simply surreal.

We all walked around in a fog. Unsure of what had hit us. Stumbling over what to say to each other. My husband's family wasn't the type to say what was on their minds. They preferred to keep their thoughts bottled up while wringing their hands and smiling sadly at each other.

So I kept my emotions to myself - only allowing myself to come undone when I watched my husband crumple onto my lap in tears. We would hold each other and cry. He would rub my very pregnant stomach and silently reflect on his relationship with his father as he was about to come one himself.

After two long years of medications and tests and hope and worry, my husband's Dad ended up in the hospital. It was June. And the cancer was now in his brain.

We went to visit him with our then 16-month old daughter, Anna, on Father's Day. It was the first time I'd seen him since he started going downhill rapidly. He no longer really looked like the father-in-law I knew. His face and legs had deflated. His body was swollen. It shocked me at first. So I stood back - uncomfortable with the inevitable outcome of death. Feeling awkward about getting close to a man who felt like a stranger to me. His voice was no longer light and warm, but tired and slow. He didn't smile when he looked into our eyes anymore.

But then I happened to look at his face, just as he looked up at Anna.

And I saw him. At that moment, I saw Peter again.

His face transformed. His eyes lit up. He smiled broadly. And he spoke to her in his grandpa voice. That voice she knew and recognized well - already in her short little life. That voice I remembered.

He got tired and asked us if we would mind cutting the visit short. Before we left, I brought Anna up close to him. She wanted to stay in my arms, but we stood right next to him to say our goodbyes.

That's when Peter looked up, his eyes focused on Anna's face.

"Thank you, Heather." He said. His lip trembled a moment before he continued. "For Anna."

I nodded. Words stuck in my throat.

And then he said something that made me overwhelmingly sad, but strangely content at the same time. This time he looked right into my eyes.

"I'll be there at Christmas, you know. You may not be able to see me. But I'll be there."

I nodded at him again, this time breaking down. Choking on the words I wanted to say. My emotions stopped me from telling him what I wanted him to know. I felt betrayed by my tears. This was possibly my only chance to let him know that I knew he would be there. That he would always be with us. And I couldn't say it.

She would know that he was a teacher at one point in his life. That he was one of those types of people that everyone loved because he took the time to get to know you. To ask you about yourself. To care.

I couldn't say it. But I hope he felt it when I squeezed his hand gently.

I hope he knows. 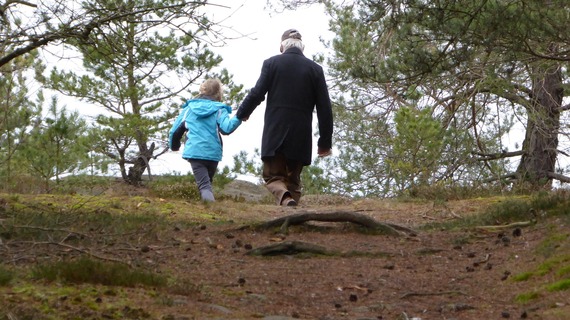 Heather Dixon is a writer, copywriter and content gal. She's also a big-time Judy Blume fan and a Mom to three highly advanced little girls (according to her husband and her). Her work has been featured on Pregnant Chicken, Scary Mommy and the Mabelhood. Follow her on her site, or on Facebook and Twitter

More:
Parenting ParentsDeathvoicesloss
Newsletter Sign Up
Raise the kind of person you'd like to know
Subscribe to our parenting newsletter.
Successfully Subscribed!
Realness delivered to your inbox