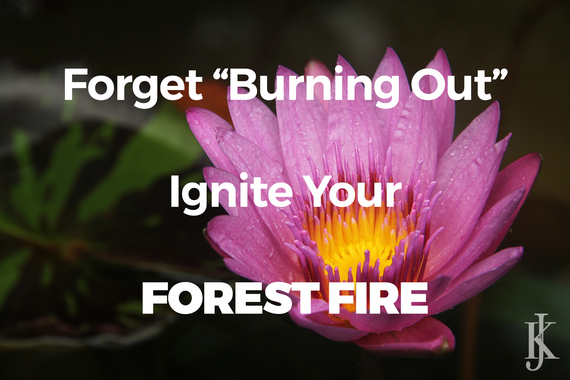 "How do you not get burnt out?" This is a question that someone in the crowd asks at almost every speech I've ever given. It's a question that I'm never truly able to answer properly because I've never been accustom to a lack of time management. Between sports, school and extra curricular activities throughout my entire life, "juggling" was a craft I began to master early on. However, this question of "burning out," in my opinion, often carries bipolar connotations - both somewhat negative and extremely positive.

On one side, you have this "mental burn rate" at which your efficiency is damaged by your inability to assess and fulfill basic human needs. It's critical, when preparing and executing on a goal, that your priority is your well being. Meditation. Proper sleep. Drinking water. Eating. The basics of Maslow's hierarchy of needs. These are all essential to perform accurately and efficiently.

On the other, more favorable side, "burning out," to me, suggests that you're on fire! And in that case, why would want your flame to dwindle? If you're asking about burning out for the sheer sake of losing motivation, that's a problem in itself. You may have to revaluate your purpose, and reinvent your execution strategy. You probably shouldn't be pursuing a venture where failure or mistakes will deter you from achieving the overarching mission or goal. In the event that my startup, PeduL, fails, I will never be dismayed from my ultimate goal: to inspire youth to maximize their potential and expand their boundaries regardless of uncontrollable-deterring factors. No, I'm not suggesting that you should spread yourself too thin and not realize when you need a break, but when you become consumed with a passion project, or extra curricular activities that provide a fuel to your internal fire, instead of worrying about "burning out," start embracing and encouraging the ignition of your forest fire.

The interesting thing about forest fires is that they can happen at any moment, for any reason because of some particular series of events. This is often how we stumble upon our passions. I had a close and non-adventurous friend join me on a hike to the top of a mountain in New Jersey. I almost thought she was going to pass out the whole time. But when we reached the top, the scenery and artful, but natural, imagery of the skyline and view was so enticing and engulfing that she fell in love. She's now hiking more than me. She just recently returned from Colorado and shared pictures on Facebook of the Rockies, which I'm sure was a grudgingly long hike. But due to these seemingly minute series of events from the first mountain she climbed with me to the mountain a week she started to climb since, she discovered a passion. The journey became critical to appreciate the outcome. What was once a flame became a forest fire because of the subsequent series of events that fueled her true desire - to see nature's beauty in its purest form.

You're passion for something should turn you into an obsessed maniac. You should be eating, drinking, and sleeping your passion. It won't be forced. It won't be obligatory. It will never be a job. That's why I'm a proponent and avid advocate of play hard, work never. I'm not saying go fail all of your classes and have no life goals. But the moment you make a decision to stand for an ultimate outcome, a change you'd like to affect in the world through the lens of your own pain points and experiences, is when you'll become a persistent player. You're job is to play. Play with ideas. Play with concepts. Play with the status quo. Play with accepted notions of doing things. Play with execution strategies. Your passion becomes your playground.

When I wake up at 6:30 a.m. to play with PeduL, I'm not working. Regardless of the channel or avenue, I am dedicated to inspiring young people to expand their boundaries and maximize their potential. I'm married to this outcome, regardless of the vehicle, and my playground is my infatuation with execution. I'm reaching out to the next monkey bar every time I plan a meeting with a guidance counselor, conduct an empowerment workshop or interview developers. Sometimes my hands slip, and I fall to the gravel as I'm advancing to each bar towards my ultimate goal. But instead of interpreting my weak forearms as a result of "burning out," I look at the mistake as an opportunity to fuel my forest fire. An opportunity to reinvest myself. An opportunity to reinvent myself. An opportunity to make wiser decisions. An opportunity to try new mechanisms, techniques and strategies to execute on my overarching goal. So the next time you fear "burning out," ask yourself....is my passion fueling my forest fire or is my lack of passion slowly blowing out my flame?